Rudiger is solid, Viva, better than Mustafi and Ginter.

Anyone else finds it incredibly silly that the German team uses #GERFRA as hashtag for the game, while the French use #ALLFRA - 'Germany' as opposed to 'Allemagne' ?
Doesn't this defeat the purpose of a hashtag? Couldn't they agree on one?


Anyone else finds it incredibly silly that the German team uses #GERFRA as hashtag for the game, while the French use #ALLFRA - 'Germany' as opposed to 'Allemagne' ?
Doesn't this defeat the purpose of a hashtag? Couldn't they agree on one?

No, it should be #DEUFRA and #ALLFRA because you know brexit

French think France is the center of the world.

Well there is one Frenchman who thinks all the best futbolers are French!

To be frank, they have the most impressive team I watched so far. If Germany had even one of their technical wingers/ strikers we would demolish any team in the world. As it is, the only useful guy is Reus is who is perma injured and an out of form Goetze. Our striker is Werner who shows potential but is still very young and with little experience. So yeah, the team can create  lots of clear cut chances but the striker is not optimal and a true weinger or striker who can take 1 on 1 isn't there. In the past, Lahm provided the extra dribbling to break through.

Hey Babs. Your NT literally won 2 big trophies last year, with reserve teams. You have more depth than anyone. I say Brasil is favourite, followed by Germany and then France. I like to think we Spanish can surprise, but we’ll see.

futbol_bill wrote:Hey Babs. Your NT literally won  2 big trophies last year, with reserve teams. You have more depth than anyone. I say Brasil is favourite, followed by Germany and then France. I like to think we Spanish can surprise, but we’ll see.

I am not impressed by Brazilian defence. They have awesome attackers but I think in midfield and defence all of the Germany, France and even Spain edges them. Spain has to undergo a transition though. Instead of a slow build up, a fast transition style a la Atletico Madrid is more suitable to the current crop, so all ball hogs like Silva should sit on the bench.
The reserve team is a reserve team. Nothing compares to WC or EC on international level

Brazil, Germany, France and Spain are at the same level atm. Think one of those 4 will win it.

Whoa, J-Low means business, they have a slogan, "die Besten ruhen sich nie aus'  or if you like "The Best never rest".  Well, the best and coke addicts.  If you were wondering who was going to win the WC, wonder no more, cus The Best Never Rest! Come on, this pretty well assures Germany of repeating.

A couple of interesting friendlies,for whatever they are worth, vs Spain and Brazil.  Cant see the clubs being happy with the timing of the games though.  Are the Brazil press making a big deal of revenge?

So what can I make of J Low's picks?

Neuer should be back in April, so Trapp or Leno will be gone.

The Left back position, will go to Hector or Ginter or Plattenhardt or Rudiger or maybe even Can, he played right back at Bayer.  I think Sule played as a wingback as well for Hoff, early in his career.  At one point I was thinking maybe Tolijan, now I am more inclined to think he will become American.  Whatever happened to Howedes...

Reus not picked, could be because he just came back from injury, or that he is currently injured, Gotze not picked either, not sure if that means he is not going to Russia.

I dont think all three of Super Mario, Sandro Wagner and Timo Werner will go, he may only pick two, maybe only one.  Guys like Mulller, Draxler, Sane can act as forwards.

I actually seem to remember Can played left back at Leverkusen

Not that he should play it for the NT

Who else is there? 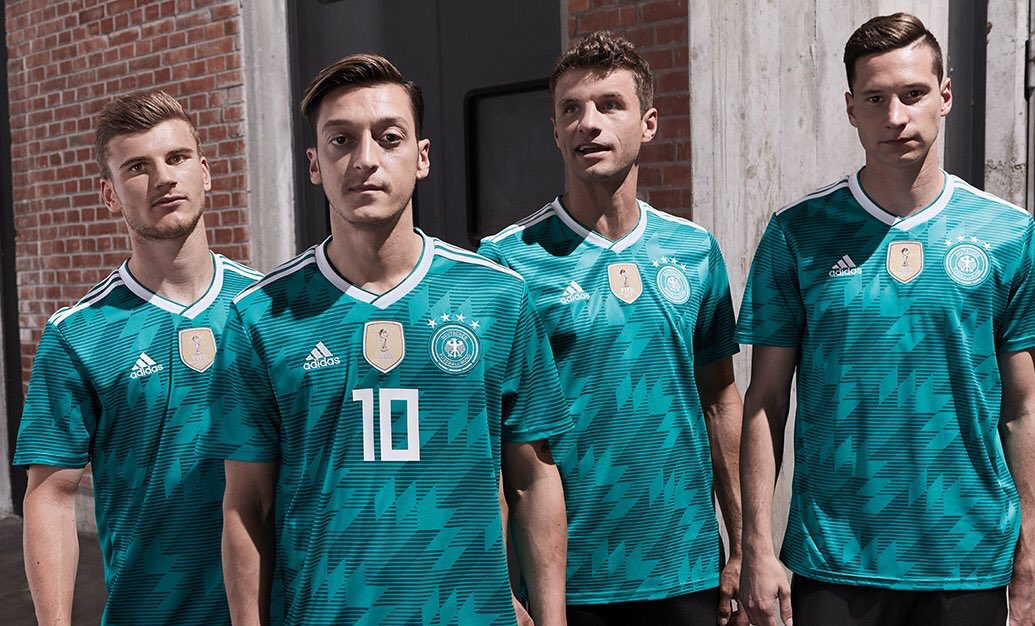 Hapless_Hans wrote:I actually seem to remember Can played left back at Leverkusen

Not that he should play it for the NT

Since i saw your Kitch album cover avatar, I have been thinking of my father record collection, it inspired me so much, that I had to bring out another of his favourites.

Oh and yeah, Can should never play for Germany, but he probably will.

The DFB has extended the contracts of the coaching team, including manager Löw, until 2022

UGH
the most ugly bunch I've ever seen. This is nothing but disgusting. What are they wearing? What is this photo?
Depressing

There are four goalkeepers, as Löw is still hoping for Neuer to get fit, who hasn't played a game all season since his anewed injury.
That hope will of course be disappointed. Neuer broke hisfoot last summer, then broke it again at the exact same spot in fall after like one appearance.
He was supposed to come back December, then January for the winter break, then March, then April...
Now the season's over and he hasn't played a minute. He's not even able to fully train ffs. He won't play in the Cup final either.
At this point I'm glad if he ever plays another game of football. Ridiculous stuff.

anyway, Ter Stegen it is.
Löw has snubbed Can (injured for months, while Boateng and Neuer were included despite injury), Götze (a mistake), and Sandro Wagner, who had proclaimed certainty to be included just a few weeks ago, especially after Stindl got injured. Apparently Wagner cried in the Bayern dressing room when he found out he's not going. For him, Freiburg's Nils Petersen is included.

No Weigl, no Götze, no Schürrle, no Schmelzer, no Dahoud - BVB has been, again, treated badly by Löw, though miraculously Reus is fit to be included, as of today.

Anyway, I think that Neuer, Tah, Brandt and Petersen end up being eliminated from the squad.

why no julian weigl in the squad is he broken

rather poor season after a broken ankle last summer/fall

klopp should be right on him tbh. now is the time to steal him.

klopp should be right on him tbh. now is the time to steal him.

Nah, no chance, Pep and Tuchel will be on the case too. Should definitively stay another year and get brought back to form by Favre though IMO

Why's Götze been dropped? I thought he's a mainstay in the team plus should be in his prime years.

Chances Reus makes the team? Felt really bad what happened to him last world cup. Or I guess his career basically. Brilliant player

Even though Germany are arguably still the strongest national team around they may be plagued with one too many fitness concerns - in goal, in central defense, on the left wing, etc. and they still haven't found a center forward to deliver on the big stage for them the way Miroslav Klose used to.