Best striker in the World?

Ariana is too sexy

He has been the best striker for a long time now.....

No striker brings as much to the table as he does, it's not just his goals but his overall game and the crap loads of chances he creates.

Closing in on 250 career goals and 100 assists, let the haters hate he's called Ibracadabra for a reason

He was the best striker in the world before PSG aswell...

Only reason he hasn't been able to bang in goals like he is doing right now is becouse most of the teams he has played for has lacked a midfield.

Good point about them lacking a midfield. Yeah Ibra is the best complete striker in the world. He is Magic on the ball

So is RVP but you wank over him daily.

Falcao has never done anything in the CL yet and Cavani hasn't exactly ripped it apart either....

Out of all the top strikers only really Rooney and Benzema have a good CL record.

I'm sure Falcao would do well in the CL if he played for a top club.

Would be a stat padder.

awesome player regardless of what anyone says.

the stats and the titles really don't lie 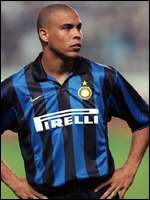 So is RVP but you wank over him daily.

Falcao has never done anything in the CL yet and Cavani hasn't exactly ripped it apart either....

Out of all the top strikers only really Rooney and Benzema have a good CL record.

Eh? Cavani carried Napoli to the CL R/16 and lost to the eventual champions.

Falcao scored 4 goals in his only CL season. I have to disagree on you with that one.

Agree on the rest except you forgot about Mario Gomez.

Ibra has no excuses this season though. He has one of the most stacked teams in Europe, probably top 5 in the World in terms of individual quality throughout the squad and the team is built around him.

Anyway since joining Inter Ibra has 20 goals and 12 assists in 46 games in the CL ok it's not brilliant but it's not awful either....

There is no excuses by his own high standards he has been well below par.

But it's not as bad as people say, at Milan his record in the CL was very good, at Barca it was very good until Messi decided he wanted a central role and at Inter it was a bit mixed which is understandable due to the quality of that team at the time.

This is one thing i will never understand, Ibra is called a flop but R9's CL record is very poor too yet no one hesitates to whip their cocks out and says hes a GOAT.

Huh?Falcao scored 4 goals in his only season and Cavani scored 3 goals in 2 games against City and no other player did that last season.

How many of those goals were him padding his stats against EL dross though?

Torres has only had like 4 CL seasons in his entire career and has scored more knockout stage goals yet you never hesitate to bash him.

I bash Torres for trolling reasons you know that

R9's european record which includes cup winners cup and uefa cup for Inter, Madrid and Milan is 22 goals in 58 games.

Would take Dortmund above QSG every day of the week btw and individual quality means f*ck all quite frankly.

This has got to be a joke.

@Mamad wrote:great striker but Scoring in France is easier

Obviously you haven't seen Ligue 1 on a regular basis to find out it has easily some of the most organized defences and tactics around the European Leagues. If it was so easy Henry wouldn't have been a flop there along with other former world class strikers who struggled in France. Myth.


OT: And how in the world is Ibra a CL flop? This myth again?

One of Ajax's most influential players playing a Left sided AM role.

One of Juventus' best players in the CL despite playing a god damn winger.

Carried Inter on his back with an old and ragged midfield who only chose to pass to him yet he still carried them further while playing in his deeper #10 role and being the sole source of creativity. Teams marked him out with 2-3 players yet he still managed to be the only player with influence and performance.

Saved Barca's ass from Stuttgart and 5 goals and 2 assists whilst being played as a god damn target man along with his problems with Pep which dropped his form.

Milan nowhere near a flop. Easily our best CL attacking player in both years playing in his Inter role as a Fantasista (#10) and never let us down ever.

PSG? Scored in his first game and along with Verrati was his team's best player against Porto. Created 3 chances for Pastore, Menez and Matudi whilst causing the Portuguese side the most problems (although not upto his standard). Thankfully not playing a #9 or forward as Pep played him but in his Sweden role.

The CL myth has come from people assuming that he is a striker whereas he hasn't played a striker since 2002 or for Sweden where he is the sole undisputed lynchpin for his team creatively and in goals.

His game is based all around how well he dictates the tempo up front which as why when he plays the passing possession up front is far more clinical. His role also is to be the creative fulcrum (stats have been some of the highest in Europe for years) as the goal scoring is just a bonus.

Ibra is nowhere near a striker as he has been a #10 for the longest time. How have people not noticed this?

As for Falcao his apps in CL was flopping twice in a row vs Chelsea and disappearing against Arsenal in the knockouts.
_________________

Ibra is the best striker in the world right now bar none. Falcao and Cavani are a distant second. Those goals