@BarrileteCosmico wrote:Yeah Audi has a sponsorship with Barca so all players must use Audis and drive them to work. I'm surprised the Q7 is so popular.

I'm pretty sure I've seen a video of Messi arriving in his Porsche Cayenne somewhere on Youtube, though?

Well of course they are not forced to drive only Audi. It is only when they go to practice and matches i think. If i were Messi i would not have only one car, especially if it is a gift and i can afford more.

@eelir wrote:Well of course they are not forced to drive only Audi. It is only when they go to practice and matches i think. If i were Messi i would not have only one car, especially if it is a gift and i can afford more.

Not many people know he has a love for cars because he doesn't brag about it like many other footballers.

Ray Hudson is a cule.

Barcelona will apparently play Bayern Munich on a friendly early July, the Munich squad will be under Pep at this time

Did Cesc and Pique seriously live in England?

Updated the player threads in the OP. Let me know if I missed any thread.

Sooner than later there will be changes in the FC Barcelona first team staff. Specifically, there will be reduction. When the club left on its pre-season Asian tour, 27 staff members (technical, medical and other assistants) joined the players. A prominent, but unnamed club source said, “the situation is unsustainable. It’s clear that we cannot continue like this for much longer.”


Basically Barça has let eras overlap. Often in other clubs, English ones in particular, as managers leave, the majority of the staff follows suit. At FC Barcelona, staff exists from Pep Guardiola’s and Tito Vilanova’s time. Now add Gerardo ‘Tata’ Martino’s people, people he has all the right in the world to want around him.

Martino brought along with him four new personnel. Assistant Manager Jorge Remigio Pautasso and physio Elvio Paolorrosso have worked with Tata for over 13 years. The other two men (Raúl Marcovich, Adrián Coria) are scouting experts, and are actually being paid by Martino personally. This is because the club has refused to pay additional analysts seeing as three are already on the payroll. Again, that’s unsustainable. Martino cannot and should not continue to fork money out of his own pocket to have his men on board. At the end of the day, Fernando Polo from El Mundo Deportivo (EMD), is correct with his assessment that, “when it comes down to it, Tata will confide in his people.”

Smack in the middle of all this is obviously Martino himself. His initial approach was diplomacy rather than that of a bull in a china shop. He wanted to get to know all the staff members, see if they could work together and understand what value they could offer. And while Martino apparently was not against having so many people, as time passed, it became apparent things needed to be streamlined. He is trying to install his methods but there are many staff members in the habit of working under Pep’s style or Tito’s approach. And because those methods bore such success, it becomes difficult to see beyond them. He is additionally wary that “gangs” or “cliques” – the Pep guys, the Tito guys and the Tata guys – don’t begin to form which could disrupt the dressing room harmony.

But there are too many people, even for a club of Barça’s size. Right now there are four direct technical assistants in Jordi Roura, new man Rubi, goalkeeping expert José Ramón de la Fuente and second in charge Pautasso. There are also five pysios in Paolorrosso, Paco Seirul-lo, Aureli Altimira, Edu Pons and Francesc Cos. Reports are there are too many cooks in the kitchen, too many voices to be heard, too many people to travel with, too many hotel rooms to book. Employees are uncertain of their role because several others also occupy it. The setup isn’t efficient.

Not everyone’s job is at risk. There are four core members in the medical team, one club delegate, one manager tasked with managing players’ needs, two equipment managers and the press relations team. However, an interesting narrative presents itself in Jordi Roura, someone Club President Sandro Rosell called a “hero.”

Roura was hired in 2009 as a video analyst at the specific request of Pep Guardiola. When Tito Vilanova took the throne, Roura was made assistant manager. Then Vilanova got sick and Jordi Roura stepped up. And then Roura became the scapegoat. But those in the know, those close to the situation, Rosell, Andoni Zubizarreta, Tito and local journalists had only words of gratitude for Roura. As the El Pais put it, “Barça owe him one.” But now with an excess of technical assistants, Roura is uncertain about his role in the club. The goodwill he amassed last season sees the directive motivated in finding the man a role, but as Roura said, “what will be will be.”

EMD claims that while Martino wants the numbers slashed, he does not consider that part of his job. Therefore it falls to Zubi to scour the organization for roles that fit someone like Roura’s or even Rubi’s skill sets. That’s likely in the youth setup. However EMD reports that Martino is a fan of Rubi’s rapport with the younger squad members and values his tactical work.

While not related to Gerardo Martino’s arrival, there was chatter last week that Zubizarreta’s role was in jeopardy. The theory came from EMD’s Francesc Perearnau and is founded on the transfer market misses. Neymar was predominately signed thanks to Rosell’s past ties with Brazilian football and the obvious will of the player himself. His contract ends June 30, 2014, but reports yesterday from EMD indicate that he will extended until 2016, the end of Rosell’s first term.

Hiring Martino ended a metaphoric homogeny of managers. Barça very soon will do the same with the supporting staff. While such issues are almost entirely indistinguishable from a fans perspective, let’s hope everything is done with careful consideration and no unneeded fracturing occurs.

every interview and press conference leads me to believe Zubi does nothing for the club except say everything is okay and fine.

So.. were going to spend 600m on expanding and fixing up Camp Nou apparently?
I personally do not look into much of clubs and their finances but wouldn't this just damage us considering our debt, also is it really needed?

FC Barcelona and Beko announced today the signing of a new agreement which will see the global home appliance group become the Club’s. worldwide sponsorship partner for the next four years. The deal will see Beko’s new logo, also unveiled today, featured on the sleeve of the new team jersey and training kit. Beko will become the first commercial brand to benefit from a permanent presence on the official team jersey’s sleeve. wrote:

What do u guys think

Sporting-wise the board is a pos. Financially since they took over Barca jumped from number 24 to number 2 most valuable football club according to Forbes.

well tbh it can't be that hard to make crazy profits after selling our jersey to sponsers such as qatar etc.

Puyol starting his new job as Assistant Director of Sports 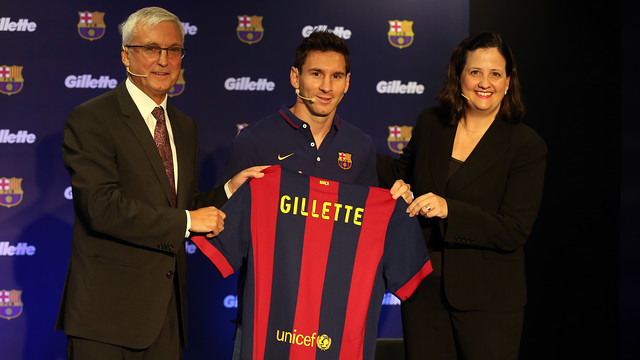 FC Barcelona has reached a sponsorship agreement with Gillette that makes the brand of men's personal care products, FC Barcelona’s Official Shaver in Latin America until 2017. The agreement forms part of the Club’s on-going project to form partnerships with the world’s leading brands.

The three-year deal was announced this Thursday in the Sala Roma at the Camp Nou at a press conference attended by FCB first team player and world ambassador for Gillette, Lionel Messi, the director general of FC Barcelona, Antoni Rossich, and the CEO for Gillette in Latin America, Alexandra Vegas.

The deal includes the launch of a limited edition of shavers that is already on the market, showing off the Barça colours and passion and which is associated to the following products: Mach3, Prestobarba3, cartridges and pre-shave products. As well as the brand association agreement, the deal also includes other aspects such as organising a soccer clinic with FCBEscola.

The alliance between FC Barcelona and Gillette honours something both brands have in common: precision. So, the main feature of the campaign is a video being distributed on social networks (https://www.youtube.com/watch?v=e9-K2aK-u9Q) that Gillette created to celebrate the partnership. The campaign plays with the relation between the word ‘precision, which is Latin in origin, and certain Latin American footballers, who are renowned masters of precision on the pitch.

Recent market analysis has revealed that FC Barcelona has some 70 million supporters in Latin America. Only China has a larger market than Mexico, with 24 million fans, and Brazil, with 20 million.

why oh dear? sponsors are needed to keep the club running and these are much more preferred considering their name isn't plastered on the shirt.

Find that hard to believe.

well someone has to pay the wages / transfer fees and not all of it comes from the tv revenue.
I don't see the problem with having sponsors like i said i understand people dislike them on our jerseys and stuff but these random ones don't affect us at all only benefit..

I think if Gilliet deal was needed to keep the club running, they probably wouldnt have spent 12m on a back up goalie, 80 something on a striker who wont play for half the season or 40m for 2 old CB's....you see where im going with this.

I dont really care about the sponsor so to speak, I just dont believe its "needed" and rather its to make money for a profit.

well i'm not specifically saying THIS sponsor is needed for the club but if you add them all up together they drastically help us.
in other words whats to complain about..
"oh dear"
sounds funny to me were getting free money...

Well I think get it.

The club presents itself in "need" of sponsorships and without them we would fall apart. So then it gets sponsor after sponsor and people all bundle them together as if we "need" all of them.

But I dont believe thats true.

Presenting the club as making a profit is what is important to them, which is why these things are done. They want to look good.

I believe that is much closer to the truth than without all these deals we would fall apart.

Page 14 of 16
Permissions in this forum:
You cannot reply to topics in this forum
Latest topics
» Champions League 2021/22 | Group E

» Where would the non-English top teams finish in the PL?

Today at 2:57 am by titosantill