Well I think get it.

The club presents itself in "need" of sponsorships and without them we would fall apart. So then it gets sponsor after sponsor and people all bundle them together as if we "need" all of them.

But I dont believe thats true.

Presenting the club as making a profit is what is important to them, which is why these things are done. They want to look good.

I believe that is much closer to the truth than without all these deals we would fall apart.

The strange thing is that apparently the club is looking to ditch shirt sponsors again in 2016 after Qatar, calculating whether it is feasible. An apparently very reliable RAC1 journalist is reporting it.

Exactly were more after trying to dethrone Madrid and United in the market rather then we need it. These last few season we've been in the top 3 most revenue earned. Last season I believe we earn $700M.

I'm not an expert in our finances but how did we make 700m last season despite not winning anything..
TV deal is the biggest revenue bringer but what made the rest of it?

Thats the closest thing I could find showing us a little detail.

financialexpress website wrote:Faus said that advertising and sponsorship revenue was the biggest contributor to the club's income, at 169 million euros, with the media - including television rights - second at 161 million euros.
Ticket sales at the Camp Nou added 128 million euros, while transfer fees brought in 53 million euros and club memberships earned a further 19 million.
The largest cost was salaries, at 286 million euros - 254 million of which went to the players.

not sure if they are reliable but if that's true then yeah sponsors have a major part in our income, if not the highest.
if we were to believe those numbers, we'd make a small profit of like 3m (without sponsors).. so yeah you'd be correct we wouldn't NEED them but then again we wouldn't be able to buy new players.. unless they cost 3m.

but i am sure it is more complicated then that simplified paragraph from that website.

Due to this summer's elections, Nike forced Barcelona into making an early decision on the kits for the 2016-17 season, with the result likely to satisfy those who prefer a traditional design

The American company usually prepare the design 10 to 12 months before releasing it and on this occasion, given the elections, they pressured Josep Maria Bartomeu's board for a decision in the days before their resignation. Nike didn't want the electoral process to delay their production so they submitted a design to the Barça board three weeks ago. The only doubt now is the presence of Qatar Airways.

The big news is that the shirt will lose the horizontal stripes, returning, once again, to vertical stripes. "It won't be such a break from tradition, like in the 2015-16 season," assure sources that have had access to the designs presented by Nike. "It will be similiar to the shirts before," added another source.

Nike's idea for how to design a shirt depends on two questions: The first is if a team is not performing as they hope (as Barcelona weren't), they change things up in an aggressive manner to halt bad sales and hopefully change results, too. And the other is that Nike usually like to alternate, season on season, with classic designs and slightly different designs.

Both of these questions were answered by Nike in releasion to the 2016-17 shirt. It's evident that the recent treble has facilitated a necessary return to a more classic design, rather than feeding the need to force a more aggressive one. 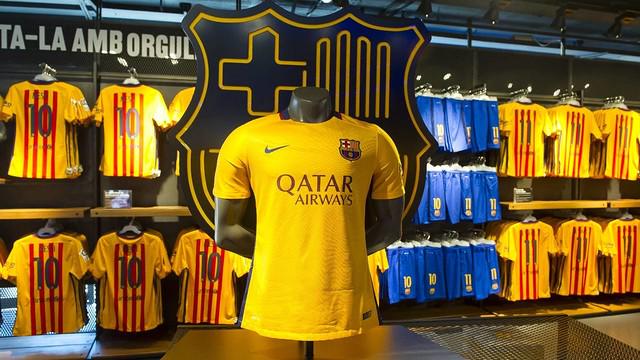 If I was part of Spanish FF, I would ask to modify this kit, it is too hard to discern the numbers at the back.

Looks fine to me 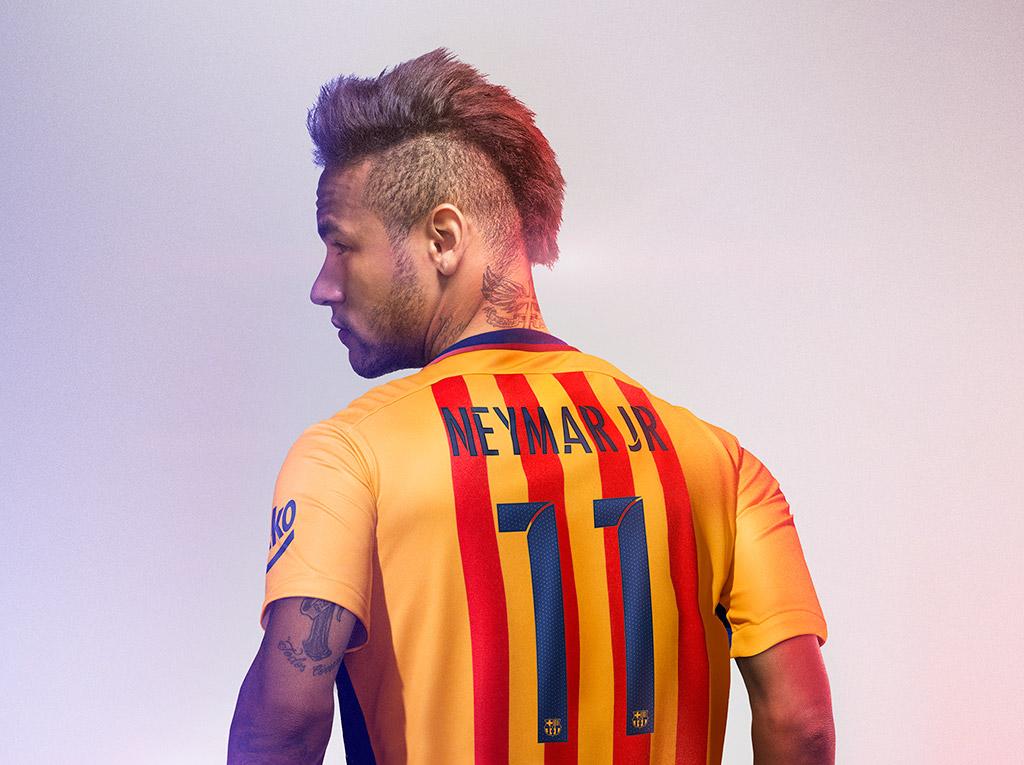 The International Transport Worker’s Federation sent this letter to all FCB Penyas, regarding Qatar sponsorship

In name of Qatar Airways’ workers – who describe the environment in which they work every day – and the construction workers who are made to risk their lives in the sites of the 2022 World Cup, we’d like to thank you all for considering the continuity of Qatar Airways as a FC Barcelona sponsor.

We believe yours is a great club with a great mission. That mission consists in representing the local community, the fans and its values. It’s hard to fulfil that mission while promoting an airline known for treating its staff in an inflexible and dictatorial manner. It’s a paradox. We are glad with the recent statements from Josep Maria Bartomeu, where he made it clear the club probably will not renew the sponsorship agreement in 2016. The President has listened to all – fans, workers and unions – that state that it’s incompatible with the blaugrana values and desires and that demand the contract with Qatar Airways is rescinded.

Josep Maria Bartomeu is right. In part, FC Barcelona is what it is due its conduct code and it’s faithfulness towards social responsibility. Akbar Al Baker, Qatar Airways delegate, said in a quote used on FC Barcelona’s website that “Barça and Qatar Airways share the same values”. That’s an insult to the truth and the intelligence of the club’s fans.

Given the disturbing revelations about what’s happening in Qatar and its choice as a World Cup host, we’re safe in saying that FC Barcelona should never renew the sponsorship with Qatar Airways in 2016. We ask you that we help us to keep it that way. If you continue to show your unhappiness with the fact that your club carries the name of a condemned airline from a nation no one believes in, we’ll assure FC Barcelona will be making the right choice in 2016.

Barcelona will return to vertical striped shirts again in 2016-17. The shirts will be based on the 1992 jersey:

Very nice shirt, if it didnt have that crap in the middle.

On Thursday UEFA's Control, Ethics and Disciplinary Body announced that they have fined Barcelona 30,000 euros for displaying a politically driven message through flags, banners and chants advocating Catalan independence during the Champions League final in Berlin on 6th June.

Official: Barcelona announce that Iniesta, Messi, Busquets and Mascherano have been chosen as captains for this season 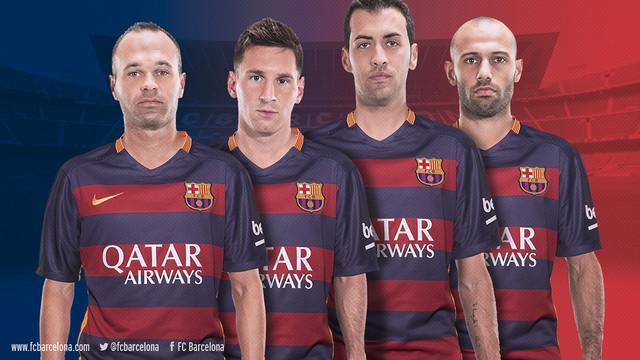 Really digging the retro looks of these kits.

Susana Monje (one of Barca VPs): "We have taken a record 679mil in revenue, it’s an absolute record in any sporting club in the world."

Bartomeu: "The deal began at a dinner hosted by Gerard Piqué at Hiroshi Mikitani's house in San Francisco in 2015"

Bartomeu: "Gerard & Shakira are close friends with president Mikitani. During 2015 preseason he organized a dinner & that's when it started"

Hiroshi Mikitani (Rakuten president): "It's an honor to announce this association with FC Barcelona, the greatest club in the world."

Barcelona have agreed to invite Chapecoense to the 2017 Joan Gamper Trophy, who were the victims of tragic plane crash.

Cover: "Barça Decade" - In the last 10 years Barcelona have won 26 titles while Real Madrid have won only 15 #fcblive [md] 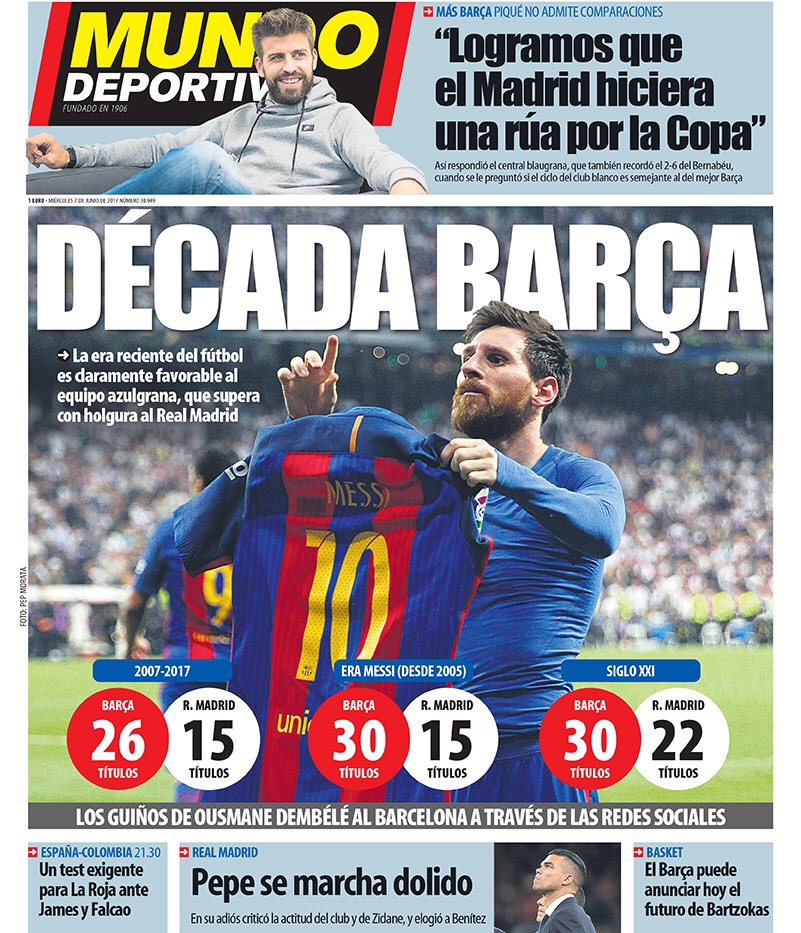 Guys, are you aware of this?

Spoiler:
A scandalous report in Catalonia has claimed that FC Barcelona contracted the services of I3 Ventures, a social media company, in order to damage the reputations of key figures such as Lionel Messi and Gerard Pique, potential presidential candidates, plus former players and managers.

According to the La Llotja del Què t’hi Jugues podcast and radio programme on SER Catalunya, the focus of a controversial operation has been to “create opinions on social media”, “with two main objectives”.

The first is to “protect the reputation of President Josep Maria Bartomeu and his board” and the second, “to erode the image of people and entities that have relations with the club to a different degree”.

When you read the report, you immediately feel it's BS. But Barça has officially released a statement to deny everything, which prompts me to believe there might be some truth to it.

What do you guys think?

But we should probably wait for hard evidence to call his head (for this). He should be fired from a purely sport-based evidence perspective though, without bringing in all this extraneous stuff into it.