Lord Awesome or anyone else how do you think Valencia will lineup this year? And I know they are trying to bring on Enzo Perez as well, I thought he looked good during the WC.

Thanks for update Nasir really appreciate it.

Of course I'd welcome Perez as well I also thought he did well in WC.

Jonas, Cuadrado and Pereira have been mostly on the bench this preseason. Unless the new coach is just testing out his bench I doubt they will be starters

It's only a guess really. Haven't seen Valencia preseason matches at all so I'm only going by what I know. The younger players will earn their spots in time once they've proven what they can do in this team.

As for Parejo, the thing is now we have too many AM's and I couldn't find a way to squeeze him in the squad with Feghouli there. Unless Espirito Santo wants to go with 2 AM he'll take out Guardado put him instead or he can bench Feghouli. I only put Feghouli there as he knows how to Dribble with the ball more so than Parejo who is more of a Passer.

Well now we got Zucullini on loan from Man City. We'll see what he brings to the team.

Andres Guardado on loan to PSV.

parejo is the captain, he's been one of our best, if not THE best players in the last year and a half, there is no way he's not starting... even if/when we sign enzo

joao pereira and jonas are both leaving

Lost points to Bilbao. Basques coming back to laugh at me for laughing at their CL performance.

There are two Valencia Threads in General Section. Can't we merge them with this one.

On topic, would be happy to be in CL next year. That's all I expect right now. And hopefully they will become a regular CL team (like the old days).

What's the status of their new stadium!

I'm expecting nothing less that the title. lol While Atletico, Barca, & RM duke it out in CL Valancia should sneak past them in the latter stages of La Liga. Muahahah.

All we have to worry about is pesky Sevilla who could also do the same.

As for the stadium it's still only half done. Apperantly it's set to be finished as late as 2019....

Guess we'll still be at Mestalla for a few more I suppose. I could wait. 7 years since they started, what's a few more.

all bow to awesome rwo

Defo have to win against Barca next week. I expect nothing less.

. Was hoping for at least a draw since we were at home

Yeah, Iftikhar I was also hoping for a win but right now but with the way we played I don't think we deserved it. Our best performance came from the midfeild as we more or less shut down Messi, who as a result of tightening the midfeild, hardly appeared. Xavi, with his experience & Technical prowess, was the one who controlled most of the strings for the Barca attack. However, even that turn out lackluster because Dani Alves had one of his worser performances attacking from the right. Jordi Alba's flank was the side that seem more dangerous and top it off our Defense, despite it's typical solidarity looked shaky when Neymar/Suarez got on the ball. Suarez should already have had his first goal for the club but was wrongfully disallowed. Our woes were worse upfront. The players were given space on the counter thanks to the reliable midfield. Mainly from Andre Gomes who had a really good game. However our peformance in the attack was just god awful. The lack of composure led to some pretty ridiculous decisions upfront when it was time to srike. Won't critique Negredo too much as he din't do too bad and looked, if not lethal than at least dangerous. Rodrigo, Parejo, & Feghouli, tho, were just woeful to watch them fail. Diego Alves started shaky too be gained confidence as the match progressed. Next to Andre Gomes, Gaya, & Negredo he was probably our man of the match.

Real man of the match is Busquets tho. Not based on performance, just based on importance.

For the second consecutive week they conceded on the dying minutes

. Those dropped five points means they are now four points from CL place

Yep. Actually we've dropped 7 considering that I felt we should've defeated our oppenents in the past 3 fixtures.

We're in a slump. Has to be said. Flopping left and right. If I had to single someone out I'd say, Otamendi had like his worst game ever. Negredo finally scores tho it wasn't enough. We'll come out of it. Hopefully sooner rather than later.

Back on the winning road & advance to the round of 16 in CDR. Finally a good week for Valencia. Piatti surely the player of the week after what he did against Rayo. Showed what can happen when one chooses not to dive.

As for Rayo, kinda sucks for them losing out to Valencia in both League and Cup tourneys. No hard feelings guys. Put up an epic battle.

And are the current La Liga standings: 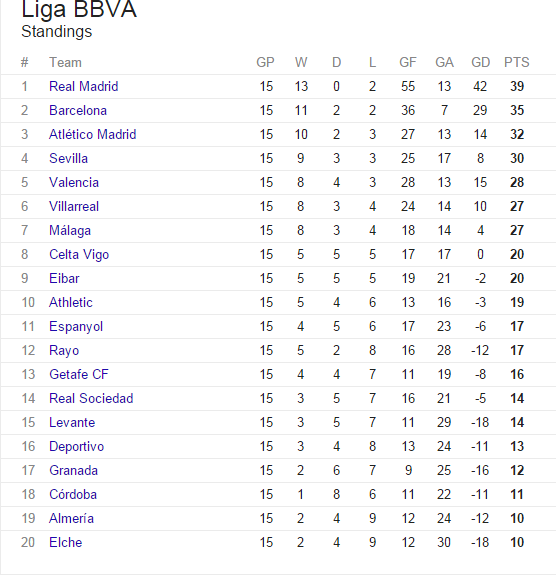 Still plenty to do to reach the top. Valencia must do their best against RM when they face. Still plenty of time to catch up, though.

Third in the table

Valencia have spent £76.30m so far in this transfer window. That's quite a hefty sum and even more impressive considering the financial clouts of non-Barca-Real teams.

Most of their signings seems to be loan deals made permanent. This have an advantage, the players are already adapted to the league & team while the manager knows exactly what to expect from them. However, considering the money paid, do you think there were better alternatives than Rodrigo (£21m), Negredo (29-year old/£21m)???

A bunch of players have also returned from loan. Those regular games (albeit at Dutch or Belgian Leagues in some cases) must have improved them.

Well we seem to be signing players that might have potential in the future. My opinion on Negredo is that he's there until one of the youngsters benches him which I hope is soon. Paco is still growing and Rodrigo needs to step it up a bit more if he wants to stay in the first team. Santi Mina was a good choice as well. Defo big game player from what he looks like. Bakkali might be big one day.

I'm torn with Monaco but I hope it's Valencia that progreses. It's certainly 50-50. And yes there's the fear we might get Lazio after whom are also on a bit of a rise.

Top 4? Oh, definitely. We already had some depth to the squad with all the promising youngsters and now we acquired a bit more. I'm happy with Nuno.

I'm a bit nervy about the away goal conceded.

Still early in the season but it's not looking good right now. Really not liking the Abdenour or Bakkali signings so far. Not liking Negredo as much as I thought I would. He makes me miss Soldado who was at least much more clinical.