With Liverpool coming up seems likely

Fred, maguire, Shae and ddg need to go tbf, no matter the manager

Why is Eriksen playing DM?

No wonder Utd have no defensive bone

And if Dalot is going to be in no mans land every time Brentford attack then at least he'd have to be a good attacking RB which he certainly is not.

we have bottom of the table LB/RB players

We dont have a real DM...our options are Fred, Mctominay, Eriksen and Donny Van De Pleb

Eriksen went from CF to DM in the span of 2 games?

ETH is a visionary

No wonder Utd have no defensive bone

And if Dalot is going to be in no mans land every time Brentford attack then at least he'd have to be a good attacking RB which he certainly is not.

He shouldn't have been signed in the first place. He's not good enough if you want to finish in the top 4.

Was Ralf right after all?

Basically, he was implying that at United, there are some world-class numpties working with the manager in many departments across the club and they are playing a huge part in keeping United far behind. In the same press conference, he said that it isn't enough to replace the manager for United and that they need to make a major overhaul in order for the club to improve (the overhaul here is not just regarding players, but also the staff).

Surely there's some truth to it. I mean, how many managers have come and go at United since SAF? No way in hell all of them, ALL OF THEM, were incompetent. Some of them were decent enough to have better results.

I'm starting to feel bad for Mourinho. Dude managed to win more trophies than anyone else post SAF with this United?! Major respect man!

Manchester United's last 6 (and a half) Premier League away games:

Madrid sold him at the right time 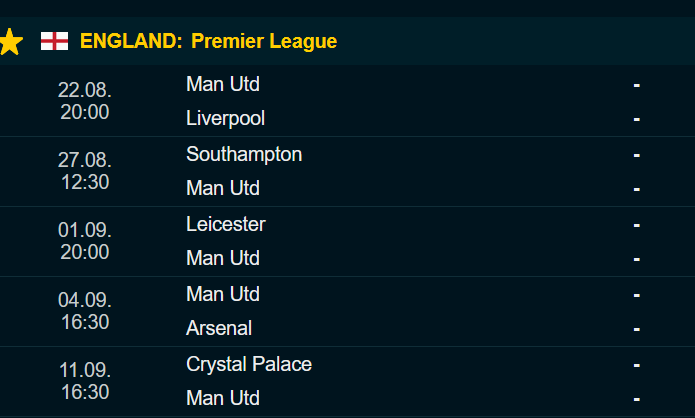 oof, genuinely could have 0 points into September

tbh I think its mostly the dog shit players

but ETH has made too many mistakes, strip Maguire, bench him forever

I’ve been saying this for years. It’s been a decade of no sporting director and signings that either aren’t good enough or disrupt any plans of creating a cohesive, effective system, and yet most fans seem to think getting a new manager will get them back to where they should be.

Managers constantly going in and out and leaving behind players that were likely brought in to fit their respective philosophies is only going to cause increasingly more disruptions to the club’s ideal goal of eventually improving the team as a collective.

The only manager whom I feel did a terrible job post SAF, was van Gaal and Rangnick. One who is overrated and the other is just an average manager.

Moyes had it bad given he had to settle in post SAF but showed some interesting signs. Mourinho was their best amongst an admittedly small sample size given the trophies and Ole did a sizeable job with what he was actually given even if lacking the conviction in sticking to his ideas.

I know I’m eternally branded as an Ole stan on here, but despite the generally disjointed team and varying results under him, I saw some semblance of progression in the counter attacking football that they played before CR7 arrived.

I might be wrong, but it did seem like a few player replacements was what they needed to improve on that team, and at least look like they belonged in the top 4 and were going somewhere. They were actually playing well against the other top teams at the time.

Ronaldo’s inclusion provided some clutch goals, but evidently forced them to scrap the counter-attacking system that had worked so well towards the end of the season, and it was back to the drawing board.

Ten Haag gets a lot of flak for wanting to bring in dutch league players, or players that he’s already familiar with, but I genuinely believe that it would be in the club’s best interest to put some faith in one manager and allow him the time and resources to build a team that can perform cohesive, sustainable football instead of repeating this pattern of bringing in new managers that inherit a world of headaches that have been papered over for 10 whole years.

If the club no longer have the pulling power to attract players who both fit what the team needs, and possess the right level of quality, they’ll have to settle for less than that. That’s unfortunately just the situation they’re in these days. I can’t think of any other, high-profile clubs that looks this chaotic and unsettled from the outside, and that matters when potential transfer targets are considering if it’s a move worth making.

It’s bizarre to me that the most vocal fans seem to be largely content with this never ending solution of hiring short terms managers when the end goal is to rebuild and get back on track. Clearly, this solution was never sustainable. The team building issue has been present for a decade. Nothing’s being done about it.

BarrileteCosmico wrote:Lvg is easily the best United managed in the post SAF era

Not even statistically better.

There was an infogram at the end of the first half with the number of sprints in the final third, pressing in the final third and total distance run. Brentford was so far ahead in both I was left wondering what exactly it was Utd were doing during preseason. Wasn't that what he wanted to improve on?

And before anyone blames Ronaldo. Rashford had the body language of someone being forced to do something ge doesn't want to i.e. he was half arsing everything. Fred was playing in I don't know what position. Absolutely no cohesion and no life to their pressing

ROFL @ Man U, geez, no one wanna thought such a disasterous start for Ten Hag for sure? Hows he gonna recover from this? Hard to see at this point if he can be successful from such a bad start. I almost feel for CR atm XD Stuck in a EL level team n no big clubs want him anymore

oof, genuinely could have 0 points into September

Wow, he will sacked in just a few games then, another new manager incoming.

For the Arsenal fans, is Martinelli like ur best player? Cos everytime I watch ur games (mostly highlights

) he stands out n seems to create the most danger?

Again, Utd could sign me as their DoF and I'll be doing the same damage on a lesser salary saving them on wages.

Again, Utd could sign me as their DoF and I'll be doing the same damage on a lesser salary saving them on wages.

is the Mom included?