I can't wait to see Cherychev clutch for us

Bale behind the striker is not going to last especially if he's just going to turn and take long shots. Sure some of them will go in but will Ronaldo & Co like that?

He was already frustrated during Roma not getting passes when making a run. You can't have Isco and James on the and play Bale behind the striker. Rafa better not *bleep* this up.

still hoping bale gets sold to united for a big fee.

Benitez tried Ronaldo as the number 9 alongside Jese and Bale on the left in the latest training session. It could work but Ronaldo and Jese make similar runs so they might clash
_________________

Ronaldo complained about the disallowed goal in a joking manner. Ramos complained too about the lack of free kick for a foul. The sessions look less relaxed than under Carlo which is good. Also the cross bar practice was as a joke when the players were leaving the field. Whoever did not hit the cross bar would be paying for lunch according to Marca/AS, those who hit it could leave the field. Non story imo

funny how the media works. AS has been trying to spin the training ground story as cristiano being upset with rafa (even though video footage suggests it was all in jest). they've also been trying to monitor every move in the training session between those two to get a story about them "not getting along"

@halamadrid2 wrote:oh and Rafa just called Ronaldo the best in the world so AS cant run with that story either

Recently when asked he answered that "he's one of the best". I guess they taught him

I think he just wanted to avoid the controversies this early in his Madrid career. One reason why Carlo was so popular was because how he handled our stars and refrained from making controversial remarks in the media

anybody who follows the youth sides what do you know about borja mayoral? marca's saying he could be promoted to second first team striker. anyone who's seen him play, what can we expect (i thought jese would be the secondary striker after benzema, unless they want jese to act as second fiddle on the wings, but we already have cheryshev and lucas vazquez). i expect mayoral to be third choice and not second choice, maybe its just slow news for marca

they want Mayoral to train with the first team and play for Castilla kind of like what Morata did. Personally I think it's too early, he has never played for Castilla. He played for our Juvenil team, and DeThomas is probably the best striker we've had for Juvenil but he couldn't replicate that for Castilla
_________________

thanks for the info, i also thought it would make little sense to have him play in the first team at this stage (no disrespect to him) since we need players who can deliver when called upon....regardless of the other competitions, not winning the league would be a massive failure, 1 league title in the last 7/8 years is not cool 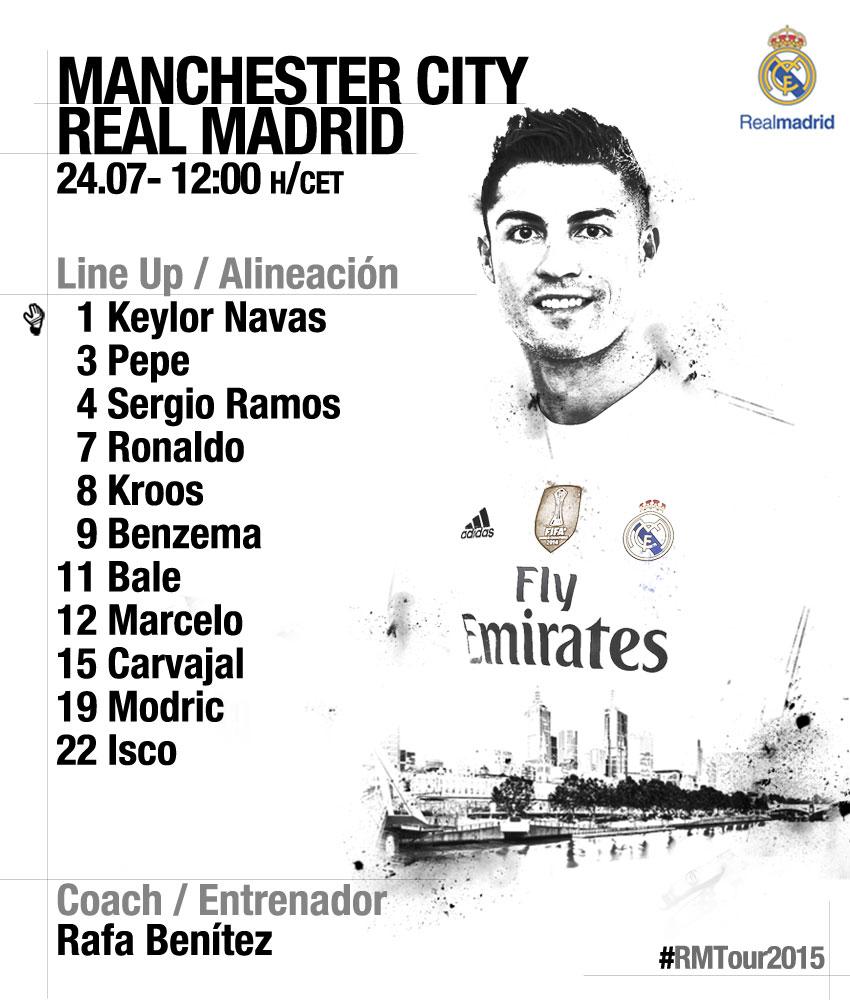 lmao this reff. Penalty for an offence that happened outside the box. But Ramos is such a braindead person, won't miss him if he leaves. Anyways some points:

-Bale looked really good in this role. Some neat one touch passes to open up City. Benz and Ronaldo looked good too
-Looks like Kroos is doing the role of Xabi by covering for Marcelo and Bale drops back to cover for Kroos.
-We've defended really really well but it's too risky to let City or anyone else pass the ball right outside our box because Barca with all their talent are going to carve us open. Need to win it further up the pitch
-Pepe and Ramos were poor although City didn't create anything they let Sterling wriggle past them a couple of times. Need to do alot better there
-Hope Isco carries on in the second half but in place of Bale. Benitez is limiting him in that RW role
-Benitez grinning from ear to ear when that fan ran to Bale not Ronaldo

Excellent game although some of the goals were due to poor defending than excellent attacks. The last 15 minutes were a little boring but that's because Isco disco went out. Some points about the second half:

-Isco looks alot better in the middle as opposed to the wing.
-Lucas Vasquez and Denis were really good, covering really well, playing one twos anr hitting City on the counter
-Marcos Llorente had a really nice cameo. Some nice dribbles but CAM is not his position. He is a CM
-Lucas Silva looked alittle awkward out there on the ball. Left our defenders to find a pass by themselves by not making himself available for a pass. Won alot of balls though
-Casemiro

that was one hell of a half from him. Kept winning and winning and winning the ball and switched the ball really well from flank to flank. Playing like this he definitely has a future with us
-Navas was really calm out there, calming everyone down while they were panicking when getting pressured. Really assured in the air too
-Hope Jese and Bale don't get obsessed about scoring goals. They played really well today without scoring any

Now James is coming back, back to full squad

How did Cheryshev do? I'm really looking forward to him getting minutes with us this season.

also does anyone have a link of the full game? The time zone difference is too drastic for me to watch the games live.

@FalcaoPunch wrote:How did Cheryshev do? I'm really looking forward to him getting minutes with us this season.

also does anyone have a link of the full game? The time zone difference is too drastic for me to watch the games live.

I see people praise him a lot on here, but I think he was just decent. He mostly shone on the counters. Did well to run into position for the cross that lead to his goal

Apparently Modric felt some discomfort after the first half and was subbed out. We really need a back up for him. Casemiro played alongside Kroos im the second half which was interesting, Benitez probably sees Kroos as Modric's replacement and prefers a destroyer type next to him. But I wouldn't want him overworked like last season
_________________

Looks like we might see Casemiro next to Kroos today as Modric felt a little discomfort and Illarra ruled out completely. Could be an interesting pairing I wouldn't mind seeing vs Barca. Casemiro as the destroyer and Kroos further up. Benz also felt some slight discomfort so might not feature today. I hope we see James but doubt it.

Looking forward to Isco running rings round their midfield. I saw them against Bayern, albeit their first pre season game they were dreadful and couldn't muster a single attack, they are still waiting for some players like Jovetic before their attack is complete though
_________________ 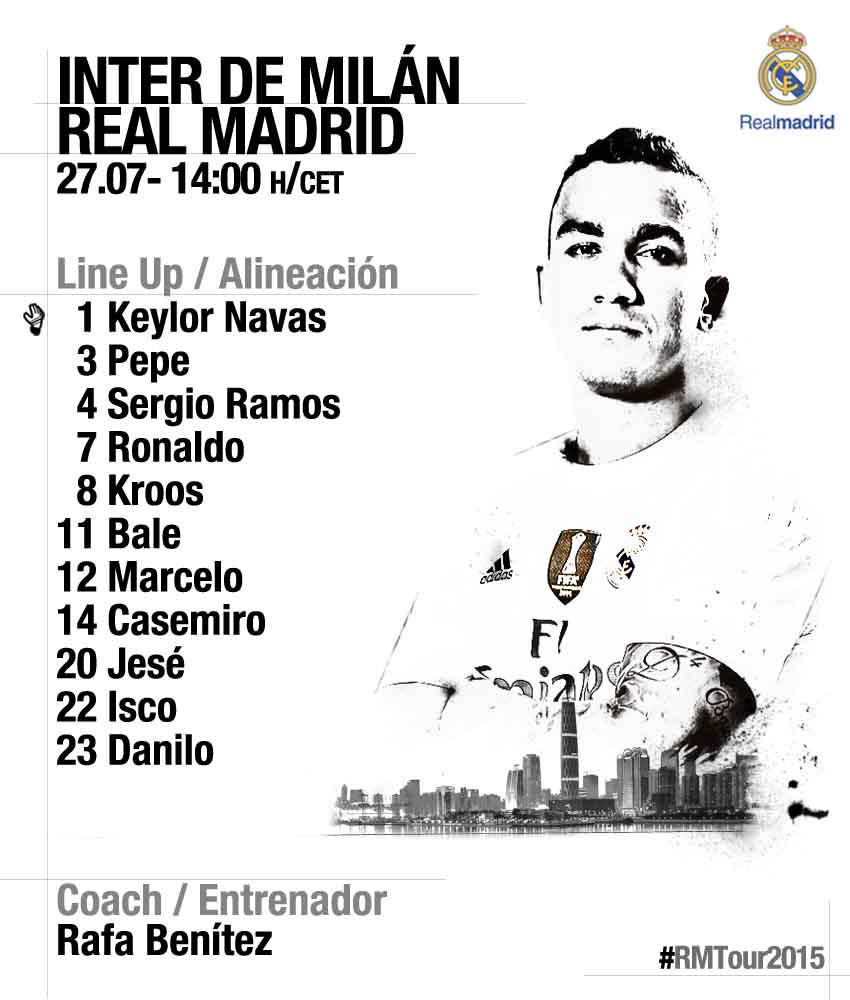 Page 3 of 33
Permissions in this forum:
You cannot reply to topics in this forum
Latest topics
» The Official Dwayne Wade <<<<<< you thread

Yesterday at 8:49 pm by Nishankly

Yesterday at 8:09 pm by RealGunner

Yesterday at 8:06 pm by RealGunner