It's going to be official soon as he's arrived in Liverpool today but I cannot wait, so premature thread

£20m suggests I should have high expectations for this guy for next season, but I'm not feeling it yet.

Welcome, anyway, looking forward to seeing him play for us & hopefully he'll be a revelation.

Finally another Serbian in Liverpool after Jovanovic (

He'll be just fine, looking forward to it. Ofcourse don't expect him to put in Suarez numbers and replace him, that's not happening.

I always had a facination for East European players.

The biggest prospect to leave liga sagres since CR7 in 2003.

From a benfica season ticket holder at Newcastle forum I post in.

Benfica fans in general are sad to see him go but we knew he would leave sooner or later. He's the most talented player I seen in Benfica since Di Maria, as I stated before. Regarding the fee, I believe we could get an extra 10-15M€ in one year or two, after he refined his game a bit more, problem is a third party owns 50% of Markovic economic rights and they aren't willing to wait. Just like Ramires. I genuinely believe he'll be one of the best in the world given the time to improve. Liverpool made a great signing and at the exact timing. One more year and he would certainly be bought by some crazy oil guy with way too much money and free time.

Unless he fails his medical exams, it's a done deal. I hope there's a problem with his teeth or something.

Just out of curiosity, how many times have you seen him play?

That's a huge statement to make.

I'd have James Rodriguez comfortable better.

@Red Alert wrote:Just out of curiosity, how many times have you seen him play?

That's a huge statement to make.

I'd have James Rodriguez comfortable better.

James Rodriguez would cost 2 or 3 times so it's not even worth looking at him.

We will never be able to sign Hames. If Monaco ever decided to sell or Hames decided to leave there will be a whole line of top clubs with pockets deeper than ours waiting to pounce. So the fact that you prefer Hames to Lazar means shit all.

We don't have the pull that absolute top teams who can pay the insane wages have. Even now United have a stronger pull than us even though they're not in CL and we are.

We won't sign James Rodriguez, don't think he'll leave Monaco tbh. Tax free wages, in a livable city, has CL, and has Falcao with him. Only team that can get him is Madrid, really. But don't think they'll sign him as he's not needed.

I was really just addressing the "best prospect to leave the liga sagres since CR7" point he was tryig to make. Again, thats a HUGE statement and I'm certain he never knew who this guy was before we were interested... yet hes the "best"?

Di Maria, James Rodriguez are probably the two best to leave since then. This is assuming hes talking about prospects which excludes Falcao etc as he left at a mature age.

Surprised we're not in for Garay, Gaitan and even Salvio if we're looking at Benfica tbh. :/

I saw him in Inter- Partizan in EL and he impressed much all Inter fans, great personality at San Siro , I remind all Inter fans wanted him after it . i remind media thought talked Markovic-Inter because Zanetti congratuled him and hugged with him after that match

I still remind also Chelsea was very close to sign him before of Benfica.

He was shit at times for Partizan but really shined at Benfica.

And yeah I remember he was hyped like crazy in Serbia after a few great games at Partizan and was inconsistent later so Benfica bought him for small amount of money, everyone thought it was bargain deal by Benfica and in the end it really was.

Markovic is expected to be confirmed as a Reds player within the next 24 hours.

The Serbia international is currently undergoing a medical at Liverpool.

And according to reports in Portugal, Markovic will request the No 50 shirt at Anfield.

Markovic wore 50 on his back at previous clubs Partizan Belgrade and Benfica.

The 20-year-old is set to cost Liverpool a fee in the region of £20million.

Spanish forward Iago Aspas could be on his way out of the Merseyside club though, with Sevilla in talks to sign him.

Anyways apparently he never celebrates his goals either. 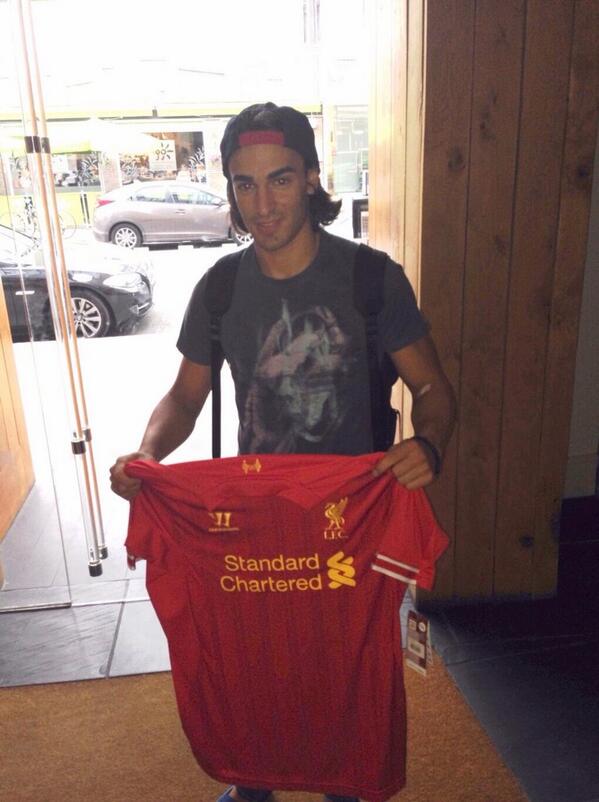 Why doesn't the official site announce it already ffs

we've known it's happening for days.

Weird that his allowed to say whatever he wants regarding the transfer before anything is official.

Very very happy with this transfer. Unlike in Adam Lallana, we are getting a player who isn't at the peak of his career, coming for an absurd price and has actually performed in a big club, in Europe and isn't just coming off Championship level.

Hard to describe Markovic as versatility is his forte, though his pre-dominant position has been more an Italian type Mez'zala than a pure winger for Benfica. Other positions he has succeeded are as second striker and an inside forward coming from deep to cut inside with what is a favoured right-foot.

It is his technique and ability to change pace in a split-second that impresses me most as in the final third he will be quick to link up and produce some exquisite through-balls to which make him a complete package in attack.

I don't know where the idea came that he will be scoring goals for us as despite his composure in the box, it is evident he does not have a distinct eye for the goal.

Yet what we have is a player who especially by an experimental Rodgers, will be eager to optimize not just on his finest position, but to eliminate the rawness to which Red Alert has spoken of, still existent in his game.

Comparing him to James is wrong, considering the 3 year age difference and that Lazar has not yet found his best position yet. James just recently has under Ranieri.

Arquitescu wrote:
Comparing him to James is wrong, considering the 3 year age difference and that Lazar has not yet found his best position yet. James just recently has under Ranieri.

Again, this is the reason why I even brought "Hames" up:

Sterling on one wing and Markec on the other

Our counters gonna be deadly

Also I believe it was reported that he's going with number 50, though it's probably not official yet.

btw he must be the first player ever to confirm his own signing ahead of both of the involved clubs.

After watching few videos, just remembered that I saw him in Europa league. Tbh I was not so much impressed, although he looks good in videos...after reading Sepi's post in GS and Arq's post feeling good abut this signing let's see how he does

Today at 5:37 am by BarcaLearning

Yesterday at 6:41 pm by BarrileteCosmico

Yesterday at 5:06 pm by Casciavit

Yesterday at 3:50 pm by Robespierre

Yesterday at 3:09 pm by Myesyats