After watching few videos, just remembered that I saw him in Europa league. Tbh I was not so much impressed, although he looks good in videos...after reading Sepi's post in GS and Arq's post feeling good abut this signing let's see how he does

Still no number yet 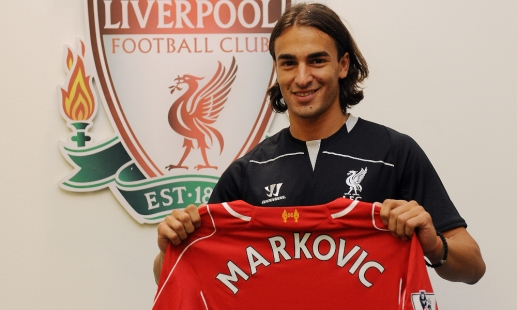 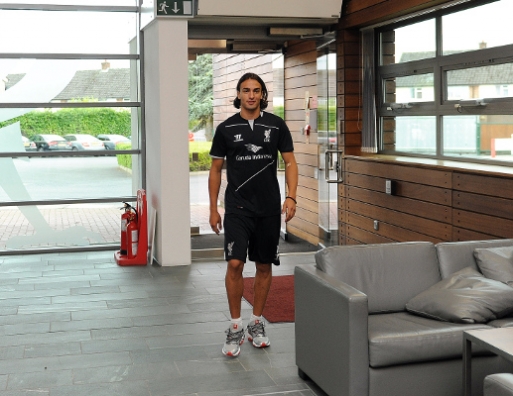 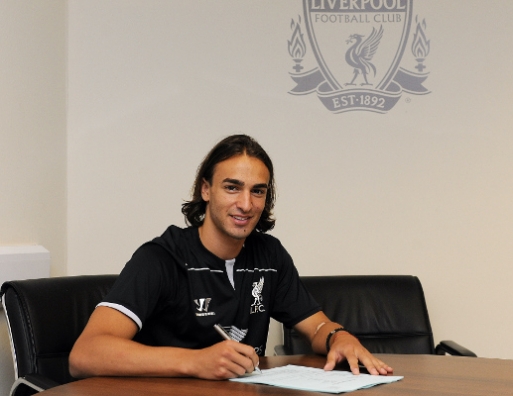 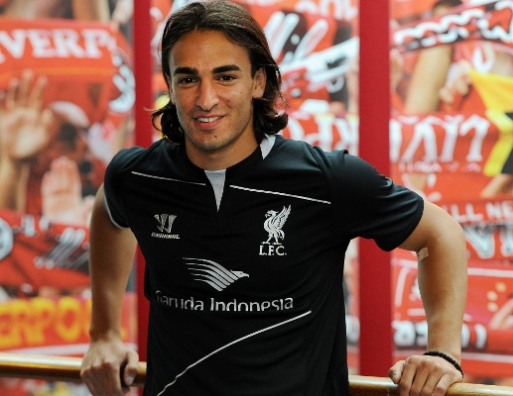 That's got to be the most impressive lean I have ever seen.

he looks too cute for my liking !!

Is it official Nish?

No, But he likes that number :O

lol everyone knows that, I need to buy a kit already and waiting for the official number.

And I really much rather have Lazar on the back of mine than Markovic.

I'm from Serbia and supporting Liverpool, this is like a dream, a player from my country playing for the club I support

I know Jovanovic played recently, but he's not that good...

It would be really cool if he went with Lazar, but he won't.

Don't call me James wrote:btw he must be the first player ever to confirm his own signing ahead of both of the involved clubs.

Anyway, congrats on the signing.

50 till now is for Brannagan if I'm not wrong. But i guess that won't be much of a problem!

Caolán McCullough ‏@Caolan_Mc_C 1h @JamesPearceEcho been impressed by any of the new signings at training today?

Can't wait to see him play today. Think we'll see Coutinho, Ibe and Lazar all playing together at one point in this match 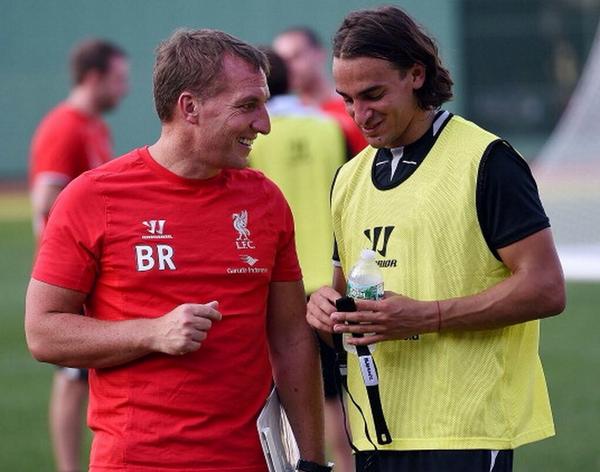 Really, really excited for Markovic. Looks exactly like the type of player I am, only obviously not as good looking.

Hope he succeeds...everything I've seen on him has been really, really positive.

We are not worthy

Q : How do you deal with the burden of being the most expensive Liverpool signing this summer, are you bothered by the huge price tag?

A : Correction, I wasn`t the highest paid and even if I was it wouldn`t bother me. I never compared myself to other people in relation to money. Not privately nor in business, not when my parents supported me and not now when I earn for myself. What does it mean being more expensive than others? It is not about price tags but what about people show on the pitch. Pitch is the best measurement of one`s football value. I believe Liverpool fans expect a lot from me and I expect a lot from myself too. It also goes for the people persistent in bringing me here.

Q : Is it realistic for you to be great even in your first season in PL? That competition is known for `swallowing` much bigger debutants than youself.

A : I don`t think like that . I don`t compare myself with better nor worse than me. I have my own path. I go from hurdle to hurdle and try to skip over them the most simple and fastest way possible. So far it`s been going good. I hope even in such a big club and respected league I`ll start well.

Q : Does your head hurt with all the compliments you get from Rodgers, teammates, Liverpool scouts and legends, pundits and media in England?

A : I don`t suffer from vanity but I`m not gonna lie by saying all those compliments don`t mean a lot to me. Especially from my boss and teammates. We are part of the same mission and we depend on each other. We encourage and help each other out. I have all that in Liverpool from day one.

Q : Does the team stand still when legendary captian Steven Gerrard talks? Especially you kids. How did Stevie G welcome you?

A : We all say Liverpool when we think of Steven Gerrard not just us born in the 90s. He is a legend, icon, king and this club`s embodiment and yet still he`s natural and normal. He doesn`t talk much but everything he says is spot on. We all listen to him and look up to him with huge respect. We are completely aware of where is his and where is ours place in club`s hierarchy. He welcomed me as a true captain and a gentleman. Other newcomers too.

Q : Rodgers is full of compliments about your football qualities. Is there something you`d like to perfect, improve , change in your game? What are you working on the most in training?

A : Even when I was a kid my parents explained to me that smart people spend their whole lives working on themselves and learning. I believe Mr.Rodgers will help me to improve like he did with other young players. Every day we are working on it together. Let my future performances showcase those details.

Q : Do you stay on the left wing ? Will you have to work a lot defensively like in Benfica?

A : We`ll see where will I be used the most because I can play in several positions and there is strong competition for every one of those. Either way I can`t avoid defensive efforts. All offensive players must run after the lost ball, get back even up to your keeper if necessary in order to help the defence. Modern football demands work in both directions. I am capable of repetition.

Q : Who are you getting along the best in your new club on and off the pitch?

A : I`m still adjusting. In America I was focused on fitting in the team and play as soon as possible and time between the training sessions I used solely to get the necessary rest. Since we returned to Liverpool , now that I have a bit more time, I try to organize my life in the new town. I only got to go to one dinner with Skrtel and Coutinho. There will be time for socializing and making friends. Let`s say I`m a bit closer to guys who also joined this club this summer but everyone else is also trying to make me feel like I`m with them for a few years.

Q : Footballing Serbia also can`t wait to see how you`ll do at Anfield. One part of it is sure you chose ideal enviroment and that you`ll do great the other feels you`ll leave sooner rather than later. What do you got to say to your compatriots?

A : Nothing new, all that is normal when you join the big club. Everybody`s got an opinion and think they know best if someone will make it or not. I`m not gonna discuss with people who think I won`t make it at Liverpool. I don`t give promises to those who keep their fingers crossed for me. Let the time show what is the truth. I know what my goal is and I stick to that. I work and will work as hard as I can and we`ll see what happens. It`s just if I never came here I`d never know how many Reds are there in Serbia. Every day I hear about someone from Serbia saying how they dream about listening live to YNWA at least once in their life. That makes me extremely proud.

Q : Here everyone thinks you have to be stronger to stay on your feet after duels in the most physical league in the world where not every contact is a foul. Do you feel perhaps a bit physically inferior compared to PL athletes?

A : It`s not all about strength pace is important too and vice versa. It`s normal I won`t be able to avoid duels all the time but it`s not like I was constantly rolling around on the floor in Primeira, CL and Europa league. In this situations I like to mention the advice Nemanja Matic gave me when he said : " If you can make it in Portugal you can make it in England too." And you know what kind of a player he is so he knows what`s he talking about and that`s the guy who played in both leagues.

Q : Matic said you`ll make it big if you change your attitude towards training a bit. Have you obeyed that advice?

A : I was brought up to listen to elderly. Ok, Matic is not that older than me but he`s at the big stage the longer. He`s been through more, he knows more and probably sees things that I don`t. I know however his remarks were made with good intentions. I take his advices seriously. I`ll try not to disappoint him.

Q : On your promotion you boldly stated you want to win the title. Do you think it`s possible to do it without the best striker of the last season given the incredible competition that exists in the PL?

A : Competition is from hell, but I meant what I said. I didn`t come here to fight for 5th or 6th spot, Liverpool fans deserve the return of the most prestigious trophy. I want to be the part of the PL winning generation. As soon as possible.


Q : Manager Brendan Rodgers mentioned how you gave up your first class ticket in the favour of a woman who was a club employee travelling with you.
A : For me it was a normal gesture of a man who respects women. I believe anyone else would have done the same if they were me.

Have you guys read/heard his recent interview/quote ??? Sounds a bit cocky to me.

Yeah I read it and I loved it. I would say confident more than cocky. He has great self belief. I think exactly what we need in terms of character.

Look at Lamela for example. Came in last year for Spurs and has a terribly weak mentality. He had all the talent in the world but his mentality was worse than a teenage girl on her period.

I don't think Markovic is quite ready for this level. He has no end-product whatsoever.

@Art Morte wrote:I don't think Markovic is quite ready for this level. He has no end-product whatsoever.

You people were saying the same thing about Sterling this time last year...

Markovic is only 20, and has never really had a continuous playing time. He needs time to develop. That was always going to be the case even if we did overpay for him. He wasn't going to come here and be a regular straight away; he wasn't even a regular in the Portuguese league so let's not put any pressure on the lad.

He needs time to develop.

I don't think Markovic is quite ready for this level. He has no end-product whatsoever.

so funny and cute in a way that people in this section just choose their player to defend and they just do it...nice keep it up!!!

Today at 5:37 am by BarcaLearning

Yesterday at 6:41 pm by BarrileteCosmico

Yesterday at 5:06 pm by Casciavit

Yesterday at 3:50 pm by Robespierre

Yesterday at 3:09 pm by Myesyats