Age was the only issue I had with signing Hazard, back when we were linked to him for a second time. No one could predict how his time with us has panned out. He looked like he'd be a great fit for us in the short term, but I just looked him up and he's 31?! That short term I had in my mind has already passed, lol. Has to be one of the worst transfers of all time considering what was spent and what was expected of him.

We have 4 games left at the SB. Is he going to pretend to be injured in all of them?

Wonder if he'll join the club at the open bus parade

Carlo wrote:We have some issues in defence because we're without Alaba, Nacho and Militão. I'll give Vallejo a run-out; he's played less minutes but he's a fantastic professional. Casemiro can play alongside him at centre-back. I have lots of options in the middle but I have fresh players in Camavinga and Ceballos, who have done a good job and are full of confidence. Asensio is fresh too and I'll assess whether Karim can start another game and if he's fully recovered I'll be able to play him. I'll put a team out capable of winning the game while avoiding any injuries to players who might be fatigued

I think it's safe to say that he's going to rotate the squad. Cama, Ceballos, Asensio and Vallejo are guaranteed to start.

He also seems reluctant to play Benzema, which is a good thing. I hope he doesn't play at all against Espanyol. Would be stupid to risk him when title is almost in the bag.

Loving the lineup. Really glad he decided to rest many players.

True, that would have been ideal.

Well taken goals by Rodrygo. Ceballos has been excellent. Mariano on the orher hand

Imagine if Marcelo didn't retire early and instead worked hard to keep in shape. Class is permanent. Will be sad to see him go. I mean the difference between him and Mendy is like day and night

My thoughts on Espanyol were greatly exaggerated. This is ez pz stuff. Or perhaps the lads making this look easy.

Camavinga and Ceballos really looking like a nice midfield pair though. Shame Ceballos may not have a Madrid career after this season.

No idea why he subbed in Benzema and Kroos when the team is already winning.

Now, I get to see Atleti give us the guard of honour. Awesome, so so so so so awesome. 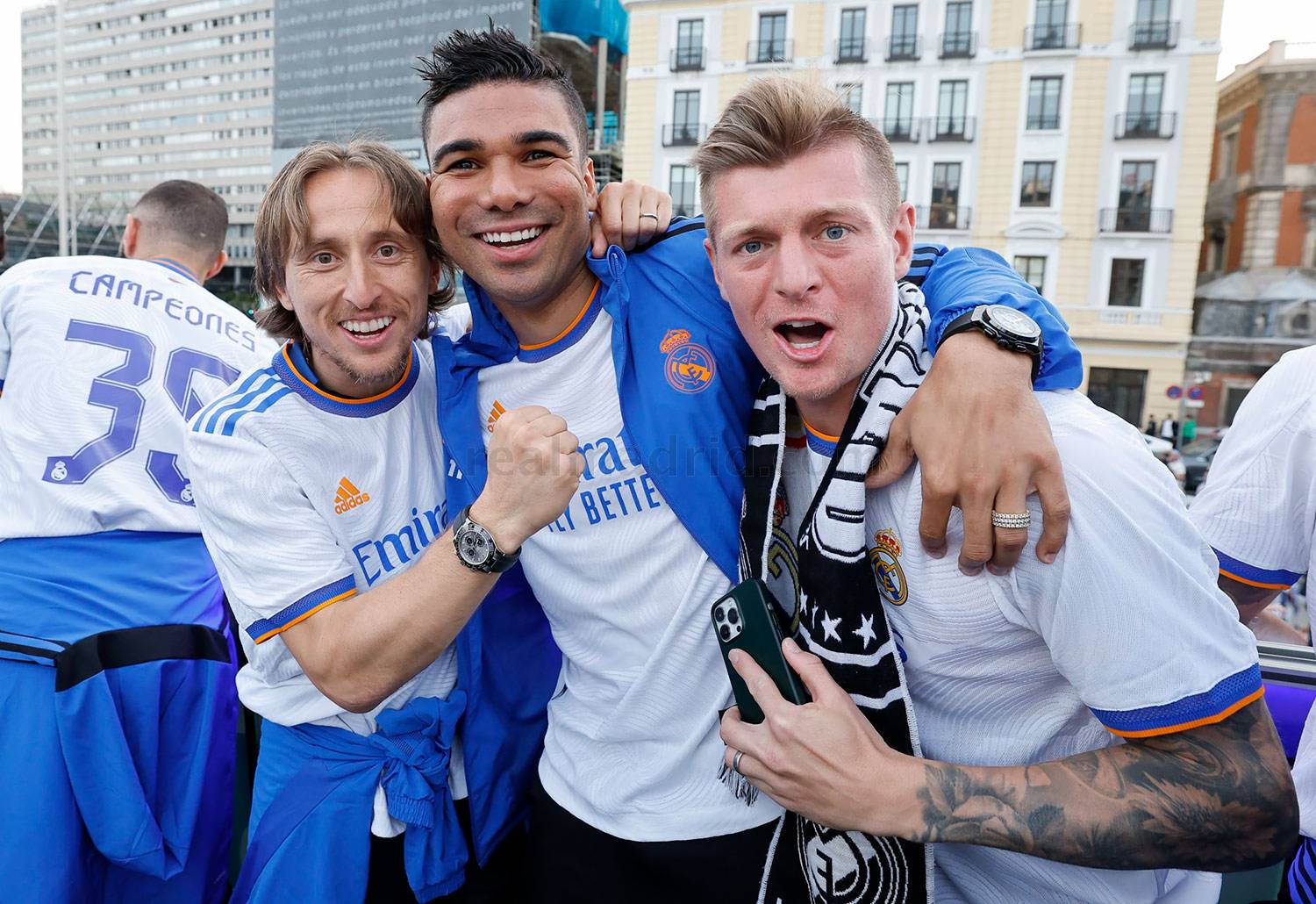 To another 5 seasons together

Congrats on winning the league. special thanks to Benz and Thibu who won so many games for us with their excellent performances.

Now, CL, The amount of Brain fart our CB's had against City was unbelievable. it reminded me of Varane against City 2 years ago.

City is probably the best team in the world, but if our CB's get their **** together we can play way better than what we did. Also Casemiro needs to play one of his good games because we need it.

We are playing the biggest game of the season on Wednesday. I want the team to be sweating blood

The Bernabeu will be lit like never before. The players, coach and Perez have been drumming the fans up all week

We need to get an early goal. We need to give Vini support so that he can find Benz in the box. Rodrygo needs to step up from start. Kroos needs to defend for his life and Benz needs to be prolific. I can't wait!!!

I didn't think we'd win the league and make the cl semis this season. Super happy for the lads and Carlo. We have already overachieved for the season

Marcelo and Isco get their moment. Hazard too joined in on the celebration meanwhile Bale complained about back spasms for not attending

Anyway let's hope we have a full healthy squad for Wednesday

Doubt Alaba makes it. But the rest should be ready

Good luck guys you will win

Amazing atmosphere the fans have produced. Gives you goosebumps

Defensively we have been very good but quite poor in attack. Vini and Benz need support. It's very easy to defend against Vini today because City are quick to close down Benz meaning he has noone else to pass to because Kroos and Modric rarely run into the box

We need Camavinga and Rodrygo asap

Just as I thought. Cama and Rodrygo turning this game on its head

This team gives you goosebumps

Page 32 of 40
Permissions in this forum:
You cannot reply to topics in this forum
Latest topics
» Most controversial World Cup Golden Ball's since 1966