@Arquitecto wrote:Man can someone tell me why in the world Mancini brought deer-in-the headlights Cristante instead of Locatelli for Verratti?

Cristante is skilled but often is bypassed physically and looks caught by a big occassion at times since he is soft like Morata.

yes, what you say it makes sense but all the Mancini substitions on last minutes were excessively negative ,  Toloi for Chiesa in last 5 minutes ...and if they score, match is not finished, it is extra -time

I think we must give Mancini credit as nowhere bar the final minutes did he do the usual "defend the lead" spiel that always ends up absorbing pressure for 30 mins till the inevitable goal.


The substitutions I did not like and Toloi coming in was negative but Spinazolla coming off for Emerson threw a wrench in his works.

Ah yes, it was first time where he looked like " negative" , but  it's understandable for last minutes

if I think to past Italy managers .. he looks like a visionary

When I read Germans poster against Low, I think what I 'd write if GL exsisted 20 years for Italy. I'd have written similar things.

for Italy-Austria, I had watched again the match played in France 98

Italy was a firepower for talent, but it was wasted from a negative lineup where you had to play with 5 defenders

Not a fan also of Italy under Trapattoni.  Trapattoni excellent manager but I think his job under Italy was very bad and you can't reduce it just to bad refs ( Moreno etc )

my first Italy NT memories are this. There was  fixation that Italy,  for a sort  of DNA    could win it only in a way. Much much defence, catenaccio, counteattack. ( but DNA in football doesn't exsists . Allegri says it too but I think it's foolish speaking)

And he came back to be that manager seen in Lazio 2002-2004 that played football very similar with this.

He made it also in first 2 Inter years.

Then he converted in Capello for the "obligaiton" to  win at all costs.

But the first Mancini was similar with this, but playing 4-4-2 ( Eriksson legacy), while its Italy is developing a very effective 4-3-3

Il Trap always seem to succeed under high pressure situations and was a club manager through and through. Internationally he was rather laid back and beyond his Ireland international football did not suit him.

Mancio for me is more surprising here because he never was really an "attacking" manager be it his Inter or Man City.

It still boggles my mind that we see him so attacking and possession based for Italy as that does tell me he has evolved and continues to even with his decisions in games.

For me I only disliked Donadoni despite his positive style and of course Ventura to whom I hate to this day.

De Bruyne: "It was a miracle that I played today because there was definitely damage to my ankle. A tear in my ligaments. But I felt responsibility to play for my country today"

City going to love hearing that...

And he was arguably their most dangerous player.

For me when I saw him starting I saw the chances for Italy to win drop drastically but increasingly through the game, they nullified him.

Fantastic match. Loved the level of play from both teams, for the first 70 minutes or so I can say confidently it was the best match of the euros in terms of level shown.

Barella scored such a beautiful goal and then was outdone by Insigne.

Gutted for Spinazzola though. Such a sad career for such a great player, as Robes said his injury is always about to come. Clearly one of the best players in the tournament and one we don't have a replacement for. Really sad to see him leave like that, he deserved to go all the way.

It was the best match in the Euros by far. A technical spectacle along with some interesting tactical play.

Spinazzolla could make his case for the best in the tourney so far and it is not hyperbole to say this will cost Mancini big given Emerson is just barely match fit.

His injury record is not pretty 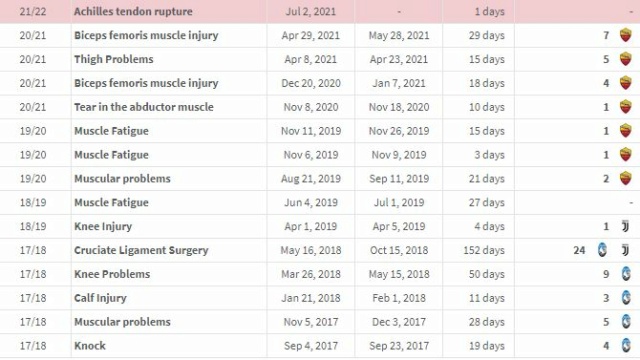 Speaking of defenders this had to be a perfect performance from Bonucci tonight.

Yes even better than Cheillini as his passing from the back was sublime and he was absolutely everywhere to defend and made some brilliant oncoming saves in the midfield to nullify Belgian counter-attacks.

I appreciate this pair while it's still here 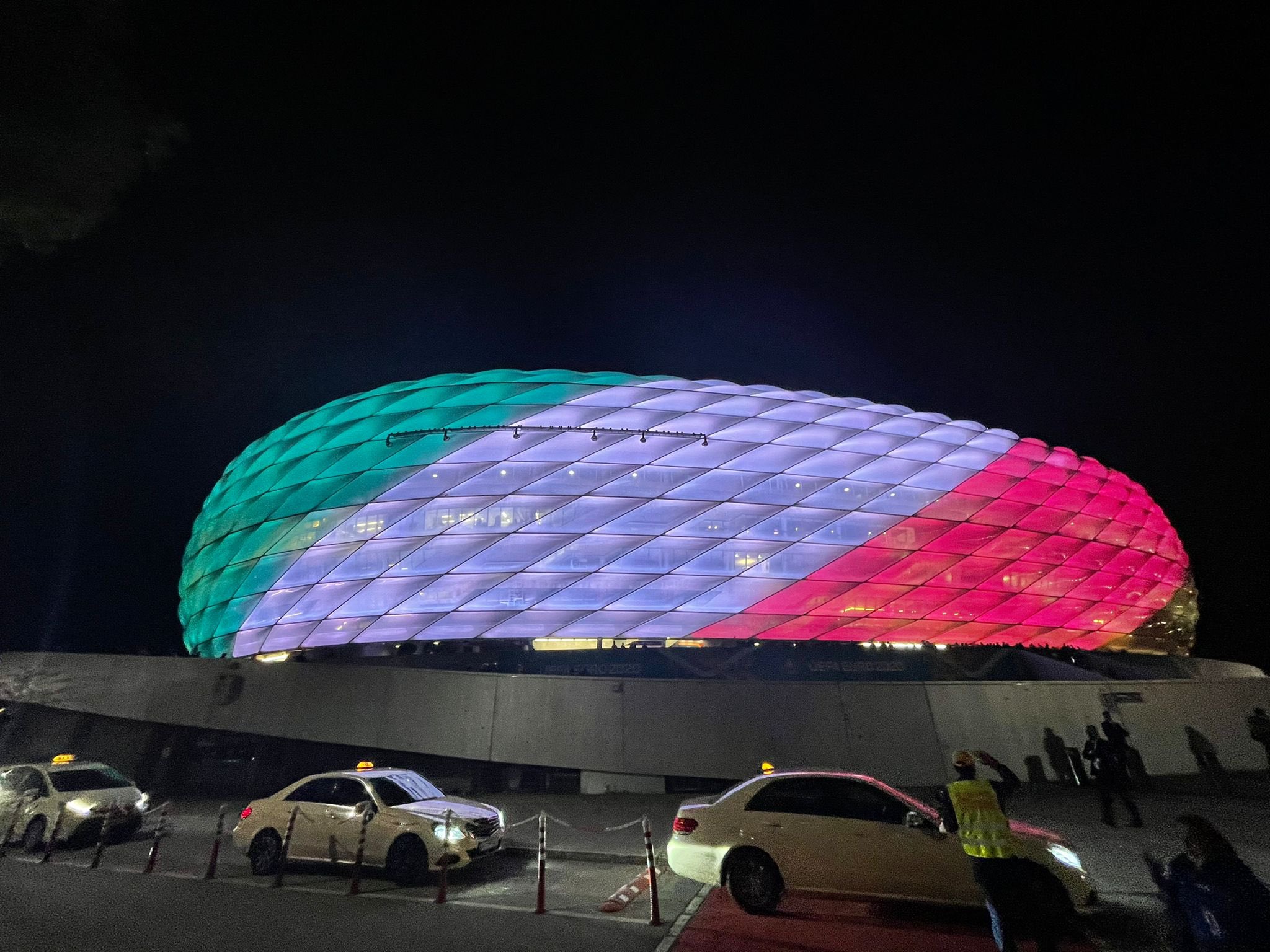 Allianz Stadium at it again

I felt Belgium playing 3 at the back was a mistake. None of the 3 were great at bringing the ball out and none of them were comfortable being dragged wide. Therefore Munier and Hazard always dropped back creating a back 5, which meant less numbers in mid / attack and less control. They should have dropped a CB and put in a forward to help the front line.

Qualitywise, this will have been the final.

And Italy are now surely the main favourites. 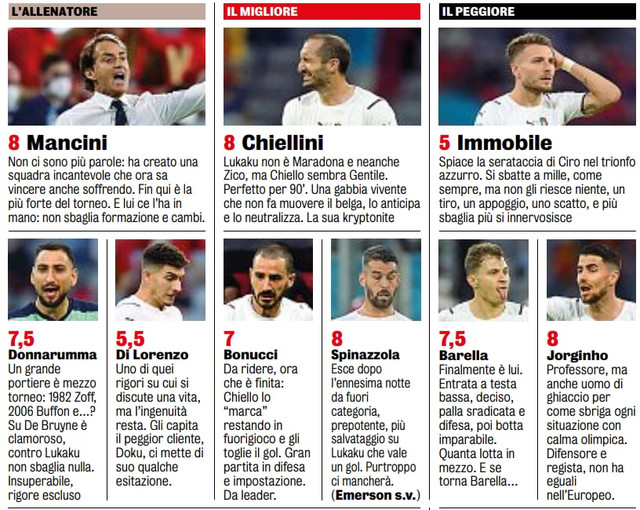 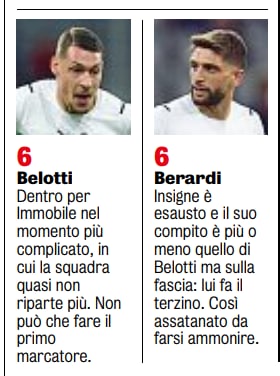 Btw have you changed your opinion on Jorginho? I recall you didn’t rate him.

Jorginho was the best midfielder on the pitch by a good distance even above Barella, Verratti and de Bruyne.

His work is discreet so its hard to notice but he has been spectacular so far in this tournament.

Btw have you changed your opinion on Jorginho? I recall you didn’t rate him.

He 's improved in these 2 years at Chelsea , I'd say he has made that path that you expect from an intelligent player (as him), refined some gaps , improved constantly.

If he was a player that performs thanks to the system, now he is the system .

Him and Barella are very improved in last 2 years. While I 'd not want to be hard towards Verratti but I feel he 's a bit regressed . Very good even him yesterday though , Mancini was right to insist with " his " midfielder... Despite Pessina and Locatelli were going good

Amazing team. So many performers, nearly everyone is pulling their weight.

Need Immobile to wake the hell up, he is asleep out there and looks lost at times. Unfortunately, Belotti is no better.

Chiellini is just another level of defender. He is from the last generation of defenders, guys who actually want to defend, not ball players who just happen to play back there. This lunatic is flying head first into driven shots from outside the box and of course Lukaku was getting almost nothing against him and switched to the center. No striker will get anything from him, despite him being 35 or 36, he will surely continue for the next World cup at least. He could do a Maldini I believe and continue until 40 while still being pretty much elite.

So many other great performances I could go on forever. Rooting hard for this team.

Immobile scores on most levels alike big or small but if he has a bad start this is how he becomes. Ive always said his confidence is based on a frail sphere of momentum and once broken half the match he will be hard on himself as if remembering the missed shot some minutes ago or what not.

He looked good in the groups stages and has 2 goals so far (with one nearly top corner shot v Austria) but alas his confidence when low means he will do close to nothing.

Plus his success was made more in counterattacking forms of play as in this system I dont see a nine being needed but more a Luis Suarez type.

Chiellini is 37 and barely fit, and just came on from injury v Belgium and bar one moment he never looked in trouble.

Bonucci was the best defending part in the game though.

It may in the end come down to the fact the 3 strikers of the big teams left, all have question marks surrounding them but Kane is now finding a way to get goals while Morata/Immobile are not.

If Immobile continues like this, the rest of the guys who are seemingly taking turns on being effective inside the box have to keep finding a way.

Today at 7:47 pm by RealGunner