FC Bayern wrote:
FC Bayern and Hansi Flick are extending their cooperation. As a result of positive talks in a spirit of good faith, chairman Karl-Heinz Rummenigge, board member Oliver Kahn and sporting director Hasan Salihamidžić have agreed a contract extension with the head coach until 30 June 2023.

Karl-Heinz Rummenigge: “FC Bayern are very satisfied with Hansi Flick’s work. The team has developed very well under him. They’re playing attractive football, which is also reflected in the results. We’re the only German club still present in all three competitions. In addition, I like the way he leads the team. His qualities as a person are convincing, he has empathy on his side. FC Bayern trust Hansi Flick, and we’re convinced we’ll continue to achieve our goals with him in the future.”

Hasan Salihamidžić: “From the first day Hansi took over, we had a plan for managing the situation. Hansi initially took charge for two matches, then until Christmas, then there was an agreement that he’d be our head coach until the end of the season. Hansi abided by it with loyalty and discipline, that’s one of his qualities. Another factor is the results Hansi has achieved with our team. The results speak for themselves. Hansi and I know the ways we want to take the team forward. Football is facing huge challenges. We think Hansi is the right head coach for these times too."

Hansi Flick: "I'm looking forward to taking on the upcoming tasks along with my staff and the team. The talks with Karl-Heinz Rummenigge, Oliver Kahn and Hasan Salihamidžić were very good and in a spirit of good faith. We've determined the direction for the upcoming years. I'm sure we can achieve a lot together."

Oliver Kahn: "It's important for FC Bayern that a coach understands the club's philosophy. Hansi was a player and later an assistant coach at FC Bayern. Now he's head coach for the long term. We're heading in a good direction. Hansi knows the club's mentality, he knows maximum success is the benchmark for FC Bayern, and I'm delighted we can develop our idea of the club and of football along with him in the years to come."

He gained more experience as TSG Hoffenheim head coach and as Giovanni Trapattoni's assistant at Red Bull Salzburg, before Germany head coach Joachim Löw called him up as his assistant in 2006. After the victory in the 2014 World Cup in Brazil, Flick took over as DFB (German Football Association) sporting director. He went on to be managing director at TSG Hoffenheim before returning to FC Bayern as assistant coach in the summer of 2019.

Elaborate on your thoughts on this extension.

Well deserved. Is it me or Bundesliga has best managers at the moment?

I wouldn't say so but they definitely have the most progressive & long term idea on it and it WILL pay off big-time within this decade. Very impressively run league.

So much for the Poch rumors

There was no alternative to giving him the job

feels a bit like our Ole, in that I would have liked (and the board would have too) to see how he fares until the end of the season before giving him the job out of a first wave of euphoria

we've played well since he took over, and most importantly it brings me joy to watch Bayern games again and this started with his first game.
Players are improving, the players are happy again. His man management is evidently great.
Question marks about him still whether he can win tough games and what's going on with his in game management

Average coach for an average club, nothing to see here.

I rate him highly, Bayern are set for the decade with him and ten Hag lined up

Seems tactically astute and has charisma.

@Valkyrja wrote:I rate him highly, Bayern are set for the decade with him and ten Hag lined up

Seems tactically astute and has charisma.

Well. Not sure whether that's sarcastic, or jinx, or serious.
But he seems to be a good man manager and probably does a very good training, as all players are visibly and outspokenly happier under him.
He's als brought back the kind of football both the board wants and the players enjoy, high up the pitch, counter pressing, controlling and attacking, but with an enjoyable and chance-creating verticality to it.
The way we play is awesome, it's become very enjoyable again to watch the team, so I couldn't be happier about him.

But, how tactically astute exactly, hard to say, I still have doubts about his ability to in-game manage. We'll see.

And 'charisma', well, let's not exaggerate.
He's actually a decidedly quiet, modest type, I'd rather call him un-charismatic tbh.
Complete opposite to Klopp, for example, in terms of demeanour, thankfully. 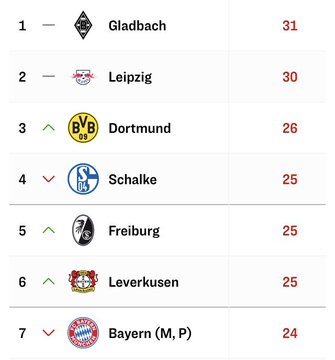 table after losing to Gladbach on match day 14 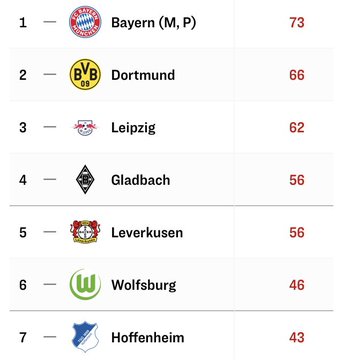 Now, champions with 2 games to go

Congratulations, Hansi, on your first Bundesliga title as manager, in your first season as top flight manager

How did he manage to put half a B team out and still won too, hes making Bayern sooo good.

What a turnaround, under Kovac this Bayern team didn‘t look like they could challenge for the Bundesliga let alone the CL... and the Bundesliga.

Well done Hans. Not easy to post on GL and manage Bayern at the same time

We should all get medals too as part of the coaching staff. Pretty sure Hans makes a lot of use of our analysis and arguments.

Congratulations to our Bayern fan(s). Immense game by Neuer. Relatively even performance by both teams. I’m quite surprised that Coman ended up as the match winner.