We will replace him with a better player,  I dont think people realize how much better B.Silva is than FDJ lol and also better suited to Barca than FDJ ever been 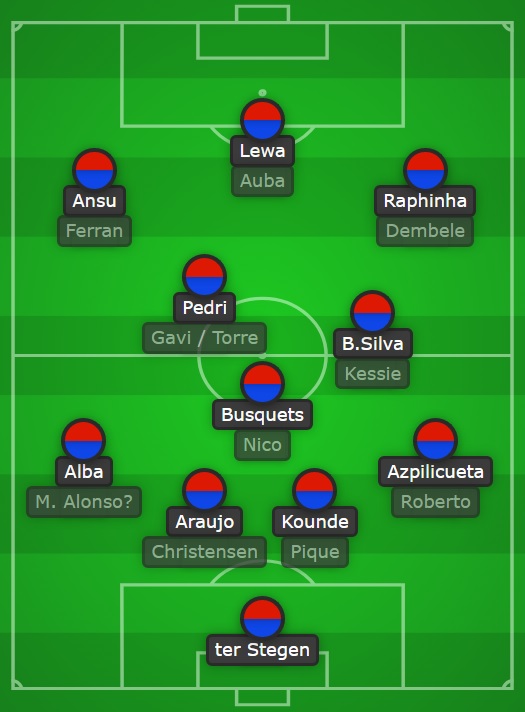 How many players  are on official squad list, and how many of new signings are yet to be registered, including the two you list that are not signed yet?

I just looked it up, adding Lewa, And two you list that are signed, you have 33 players on squad list! That’s 8 players you have to somehow get off of squad list?

Specifically, you have to deal with;

That’s a tall order to deal with. Granted a few of these are loanee candidates, but it will be difficult to deal with so many. Our experience with Mariano is an example of how difficult these situations can be, and we don’t have the issue some of these have of owed deferred salaries. Mark my word, you’re going to have difficulties and it will cost you financially to shed this high number of players.

Arent Balde and Akhomach registered with the B team? not sure

Some will go on loan (Abde, Pjanić maybe), some have suitors and could leave anytime (Puig, Mingueza, Braithwaite), Depay could be included in the Kounde deal (unlikely but maybe)

As for Dest I think Xavi wants him to stay and have another chance to prove himself, Umtiti's situation is a mystery

danyjr wrote:Why do you prefer Silva to De Jong? How are you planning to line up? With Busquets on his final legs, you need a DM. Without De Jong you don't have any replacement for Busquets. Nico can't play there, he isn't ready and might never be. Pedri and Gavi both play where Silva would potentially play.


Bernardo is a fantastic player and De Jong just a mediocre one.

There is a feeling that with Jules Koundé, it's another ‘Raphinha story’ as the player is keen to join Barcelona.
@FabrizioRomano

hasn't this been known for a long time?

Don’t think fabrizio said it though

Barça has a plan B, C and D if Kounde doesn’t come. @gerardromero

Not sure who could that be since Koulibaly is off

Xavi adding Lewandowski to this Barcelona attack alongside Dembele and Raphinhapic.twitter.com/uQHO2G0Zh0

I don't know how the midfield looked in the first two preseason games but I thought Pedri and Gavi were just passengers yesterday because the team tried to play to Lewas strength. I think the commentator mentioned just before half time that the possession was 54% in Barca's favour. I don't know, I feel Lewa will suffocate the creative players in the midfield by wanting the ball played to him fast

I think he’s perfectly built for possession football, learned a lot from Pep. He just really wanted to score in a clasico, it’s early days so he has to adapt

That said Xavi likes direct footy too, he wants to recover balls in the opponents half and keep attacking so Lewa will work well in that system for sure

That may be true, but recovering balls in the opponents half is not direct football, it's been a tenant of possession football since day 1. Now whether we did it or not is a separare story haha

Let’s not get into technicalities

Chelsea have given up on signing Jules Koundé; they are out of the race. @marca

Bruh Alemany is a menace in the market

Yesterday at 5:59 am by BarrileteCosmico