True, completely forgot that Messi benches players who could outperform him

Can't argue with that tbh.

Ronaldo should not be in 1st place he flopped when it mattered and costed his team to be second in group with missed penalty. He was great in 1st game but when teams finally took him serious and after he received messi treatement he flopped. He didnt score and his overall performance ratings were low.He is not even in top 10 according to whoscored world cup ratings 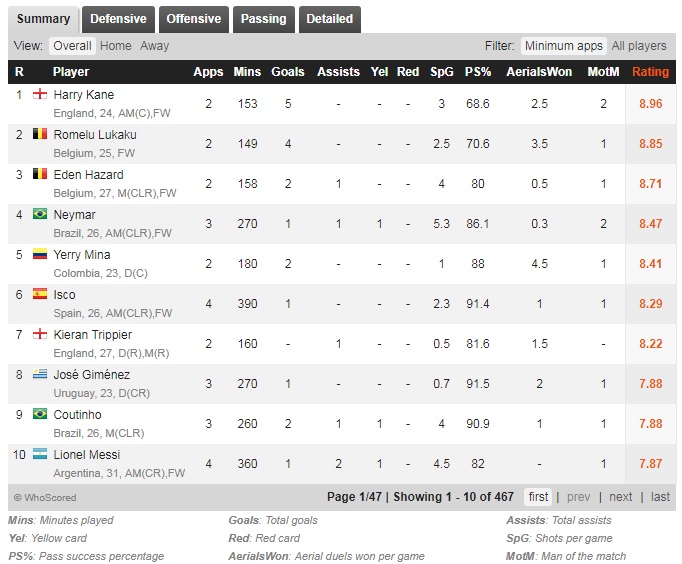 lmao "whoscored", there's a reason why i value the eyetest more than whoscored. anyways both goalies from today despite denmark getting knocked out, have to make the top ten in the next round

those are real performances that we saw, not some mathematical bull-jive

United players have utterly dominated this tournament. MOU OUT.

PSG and United the best represented in the tournament thus far IMO. Kinda funny since our best player flopped though.

Although there were multitude of diving and fouls in Colombia vs England game, one player manged to stick out anyways:
Ashley Young dived with no contact at all, stomped on the foot of a midfielder for no reason and got a freekick of it for acting ( red worthy ), didn't contribute anything to the English game while he was on, lost the ball consistently under pressure.

The ref today was even worse than thr German and Turkish one.

Young definitely should be in the plastics, so too Carlos Sanchez who, once again, let down Colombia.

I wouldn't fault de bruyne for playing out of position in CM. The coach was responsible for the mess. Also, he led the winning counter to 3-2.

Doc wrote:Young definitely should be in the plastics, so too Carlos Sanchez who, once again, let down Colombia.

Sterling? He was our best attacker today tbh, no coincidence our build up play went to absolute shite when he went off.

As far as England players go Lingard and Alli are much more deserving of any Plastic Ball nominations tbh.

Dele is coming back from injury you mong

He'll be right by Sweden. Watch him put in a man of the match performance. Mark my words

I don't blame him lol, he's clearly not fit just saying that there were worse performers than Sterling tonight imo.

Doc wrote:Young definitely should be in the plastics, so too Carlos Sanchez who, once again, let down Colombia.


We have our own opinions but I would like to know why you put Ekdal there? Because he missed a clear but difficult chance? Other than that he was one of the best players in that game. Quite harsh I would say...

I think it is really harsh to include a winning teams' player here, only if one has a real shocker. The closest I would put is Berg, missed a lot of chances but overall his link-up play was very good. France and some of its players could be a shout for conceding three against that Argentina side.

Well, it's a short list and not necessarily THE list. It's up to Nick to pick whomever. And yeah, I'll agree to the harshness but that miss was very painful to see. I like the Guedes, Dzemaili and XHAKA picks, they definitely have a bigger claim to be plastics. As for Sterling, no, I didn't see any of that best attacker stuff, didn't think he added much but in all fairness, just an honourable mention.

Rojo and Armani, forgot about those 2. Uff.

No 1: Mbappe - What a a game he had, if there was ever a way to put himself on the map, he did it. Skewered through Argentina like hot knife through butter. Argentina was leaving a lot of space behind and he destroyed them. Im curious to see what he can do vs Uruguay.

No 2: Cavani - Great finisher, that second goal was just ridiculous of technique. Sent CR packing like a boss. What did he have? 2 chances 2 goals? a shame he is injured for the next game.

No 3 : Schmeichel - he is my first keeper on the list, even though his team went out. He had some great saves, namely the penalty in game vs Modric and then the shoot outs. Probably peaking in his career and it's a nice moment to show it.

No 4: Subasic - Even if he won the PKs i put him below Schmeichel for his in game error. Still ended up being decisive overall and got his team to the next round.

No 5: Hazard: Casper is finally starting to show up on big moments, he will never be a good scorer but he is at least showing up and delivery key assists in big games.

No 6: Neymar - I know he dives too much, but i still think he is getting better and better this tournament. He gets tripled teams and abused but he still delivers

No 7: Pogba - Pogbinho is becoming a real footballer with no fancy haircut and less useless tricks. Handled himself like a real man in midfield vs mascherano and co

No. 8: Kagawa - I really hesitated here between him and Inui but ultimately i felt like he had a greater impact on the game, running circles around Belgium, great niche player.

No 9: Forsberg - Finally came through for his team, even on a deflected shot, he put them through.

No 10: Godin: He has been great all tournament but being in an easy group with 0 attacking threat i wanted to how it would carry vs better sides. he handled his business and helped shut off CR for the win.

No 1: Pique: NUMPTY UNO. what a walking disaster, i would argue Nacho is a better player than this guy nowadays. was horrible for Spain in every game.

No 2: Pepe - NUMPTY DOIS. I mean, this former la liga lads are having a killing here. Pepe was once a great stomper but his best days are behind. chose the wrong game to screw up.

No 3: Carlos Sanchez - He started the world cup with a red card and ends it by handicapping his team vs England. hope his family is safe back home.

No 4: Rojo: Hero to minus zero, got absolutely rekt by Mbappe. it's not easy to cover space vs a speed demon but still, got to do better.

No 5 - Enzo: I can copy and paste all that i said about him in the group stage, hardly ever seen such a bad player.

No 6: De Gea - Tops the list of most useless player in the world cup, the supposedly best GK in the world is supposed to be a tiny bit more i think. disappointing.

No 8 - Armani: Should really have done better on that 1v1 vs Barca to give his team a lifeline but he lost his challenge and a seemingly winnable battle. fate is cruel, he sent Mbappe on his way to greatness and him, maybe wnt play for argentina again.

No 9: Dzemaili - In such a close game it's a shame he couldnt step up to the moment, he wasn;t even having such a bad world cup. oh well

No 10 Guedes: He escaped the list all world cup thanks to the germans but who did he shot his stock down lol. I dont know where is the guy i watched in valencia for the first 6 months of the year but this aint him

thank you for the suggestions guys

You have Neymar there but not Coutinho ?

Honestly, either Pique or Carlos Sanchez are shoe ins for GL's Numpty of the Tournament.

Wouldn't you consider Suarez for the Golden Ball??? Not only he created the first goal, he showed tremendous technique and dedication throughout the game. Just my thoughts.

Impressed from Pavard in this WC .
And not just for that amazing goals of course.

I didn't know who was him before of WC tbh. But I suppose he is not fraud.

Similar topics
» Weekly European club power ranking
» Era of player power is upon us
» Has any player had as much power as Lionel Messi?
» Wayne Rooney The King of Player Power
» Danilo is the worst 30M player out there

Page 7 of 10
Permissions in this forum:
You cannot reply to topics in this forum
Latest topics
» The Official Real Madrid 21-22 Match Day Thread