Its as if the man has a history of making shit games. Given his track record I trust him. And this trailer was good, I am confident this game will be great.

I didn't understand anything from that trailer 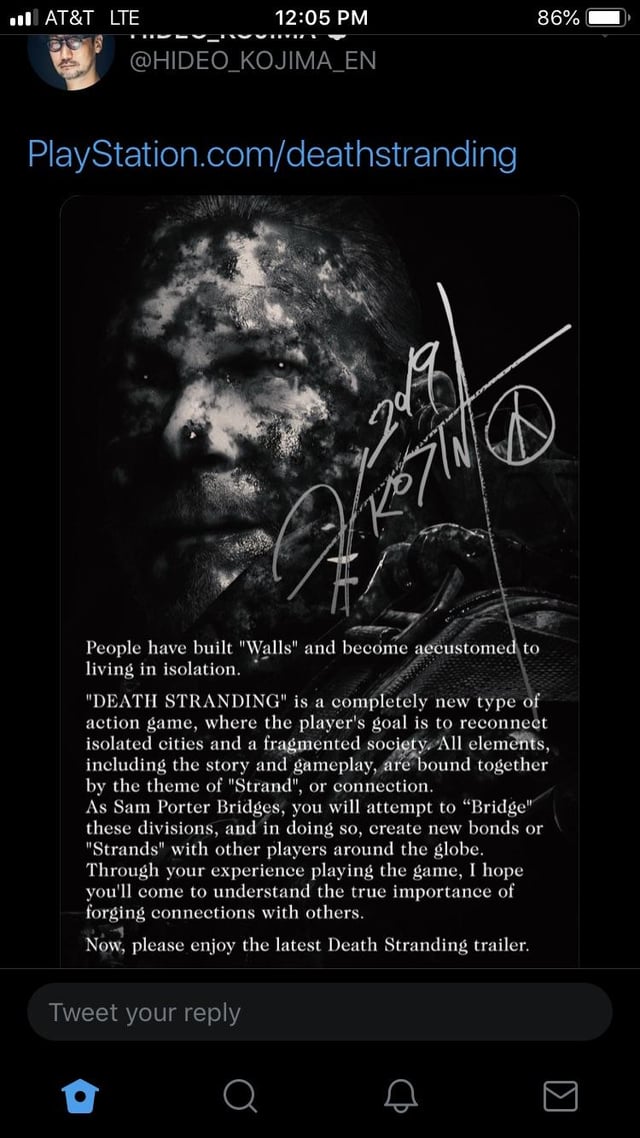 Travel between life and death

Save civilization in a desolate world that is plagued by supernatural dangers.

Experience an adventure you've never seen before - from the legendary game designer Hideo Kojima. Play as the everyday Sam Bridges as he faces a deadly and mysterious world where death is lurking everywhere.

What is Death Stranding?

In the near future, the entire world will be plagued by mysterious explosions and supernatural events called the Dead Stranding. Strange, deadly creatures appear everywhere and humanity is about to die out. Sam Porter Bridges travels through the destroyed no man's land to secure the future of humanity.

Make sure you are armed and complete your missions to reunite a broken nation. Hold yourself under the weight of your cargo as you protect your things from bandits and try to evade frightening Stranded Things. Many people depend on you. Don't disappoint them.

The Decima engine generates a lifelike landscape that has been totally transformed by the Dead Stranding. Obstacles block your path and force you to find other routes, while supernatural elements change your environment.

Death is not the end

Dying means no 'game over' in Death Stranding. You then end up in a strange world and you have to find your own way back to the land of the living. Also be careful during battles. Killing your enemy is almost never the best solution. After all, every death has consequences.

Help other travelers without meeting each other via asynchronous online gameplay. Send stuff, share safehouses and follow the routes of other couriers to restore civilization.
_________________
#JUSTICE4

WTF is up with games trailers these days, you get way more hype and info from press releases than trailers itself lol.

But above all, that soundtrack. Kojima bringing A game 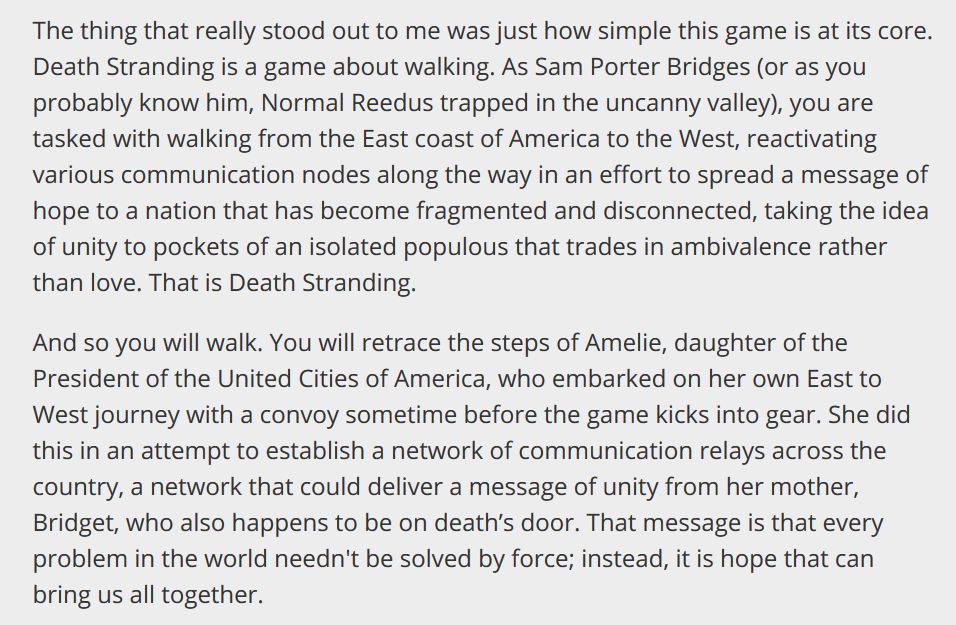 After all this time...that's the first time i have known about this lol.

That sounds a lot more appealing than the trailers.

After all this time...that's the first time i have known about this lol.

That sounds a lot more appealing than the trailers.

Trailers in general tbh, i can't remember the last trailer which was worth paying any attention to positively or negatively.

Their just kind of there, i don't think it's worth reading into them personally.

Kojima is the Refn of videogames...which is ironic considering they're BFF's and he's in DS

Kojima on Death Stranding: “Even now, I don’t understand the game”

so He's released about 50 minutes worth of footage over TGS, thoughts?

a picture is worth a thousand words

gonna be a glorious trainwreck, day 1

a picture is worth a thousand words

@M99 wrote:Its as if the man has a history of making shit games. Given his track record I trust him. And this trailer was good, I am confident this game will be great.

all I can say is big big yikes

A reviewer for the Portuguese publication Record.pt has revealed that the game is one of the best titles in the history of video games. This comes as the first impression of a review for Death Stranding. As a result, it sets the mood for more to come.

Even though João Seixas, the reviewer in discussion praises Death Stranding, he still confirms that it isn’t for everyone.
_________________

less than 2 weeks away, who is day 1ing this? I likely am. Expecting it to be gash and having to cut a scathing promo on Kojima tbh. Hope I'm wrong.

I'm definitely buying Jedi Fallen Order and Pokemon so it depends on time more than anything.

It's a distant 3rd on my excitement level behind those two so we'll see.

I am not sure which leaks you have read but most nonspoiler early opinions i have read said the game is great and a definite over 8/10.

Let's see when the official reviews are out because there are a lot of troll attempts. Basically very few people actually have the game.

I will day 1 buy it but probably won't play it.