http://soccerlens.com/files/2013/05/Emirates.jpg
Date: 16th Feb Sunday
Venue- The Emirates
Time: 1600GMT
Liverpool turn their attentions to FA Cup action on Sunday when they take on Arsenal at the Emirates. 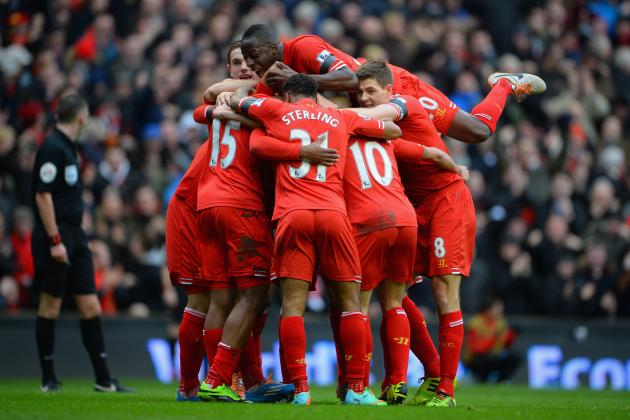 With last Saturday's 5-1 win over the Gunners still fresh in the memory, the Reds will aim to book a place in the quarter-finals of the competition.

-Flamini and Vermaelen return to the squad.
-Ramsey, Kallstrom, Walcott, Diaby are all out.
-More on Arsenal as we get to know.

https://pbs.twimg.com/media/BgL-06hCAAAqX2q.jpg
Johnson and Agger are back, This game might be too soon for Glen though.

Lucas, Enrique and Sakho are all expected to return by March.

Arsenal:
Sceznsyatsys
Sagna Koszeboss BFG/Vermaelen Monreal
Flamini Arteta
Chamberlain Wilshere Podolski
Giroud
Liverpool:
http://this11.com/boards/abGn5Y9api.jpg
We could also see the likes of Jones, Kelly, Aspas, Teixiera getting game time or does BR believe the starting 11 can handle this? Especially with the next game 7 days away on the 23rd.

Last time we played Arsenal in a cup was in 09 in the Carling cup where we lost 2-1 at the Emirates, With Bendter scoring the winning goal.

The last meeting in the FA cup also resulted in a 3-1 defeat at Anfield.

What would you want? The top 4 or the FA cup? Both?
Surely we do have the squad which can handle both the league as well as the FA cup.

Arsenal will be hell bent on taking revenge for the 5-1 loss we inflicted a week ago, Expecting them to outrun us in the midfield as well keeping the ball under their control for majority parts of the game, Yet i expect us to atleast nick a goal with SAS playing. They face a dilemma of rotating with Bayern (Away) three days later, Nonetheless their squad players can do the damage.

Winning against them, Surely give us a big up in both morale as well as winning the FA cup considering City and Chelsea play each other.

Will this thread be worth the effort?
Lets see.
COME ON YOU REDS
YNWA

I assume no responsibility for the upcoming loss

That 5-1 will definitely be in their minds. They'll either bottle it or come out firing. One thing is for certain, and that is we're going to win this game.

I'll add the pre match facts some time tomorrow. I'm about to go to sleep now.

Nishank wrote:I assume no responsibility for the upcoming loss

I think it will be two full-strength sides going at each other. We certainly have little reason to rest our players. I'm feeling relaxed about this game having won the more important one at Anfield, in the league. This feels kind of like a bonus.

Expecting Podolski to start this match.

thought I was supposed to make threads for big games

or should I save it all for home games vs. Spurs/Chelsea/and City ?

Natalie Portman wrote:thought I was supposed to make threads for big games

or should I save it all for home games vs. Spurs/Chelsea/and City ?

you have 'go ahead' for that

Btw, our squad players should be enough for these scrubs

otherwise I wont mind concentrating on the league alone

Surely we do have the squad which can handle both the league as well as the FA cup.

ffs you cant blame me now

Also Sepp you won against Arsenal, hence i thought it your powers might be inadequate this time as they know you like our bodies know about Chicken pox.

Strongest team possible please. Think we can win this if we get past this round.

when we had played against Bournewhatever, we went on to beat Everton 4-0...since we have one week rest before our home game of Swansea, i wont mind a strong team. But I am worried about injuries to any current first team player, specially after the great work done by Toure

I would start Aspas for the match and probably start Allen ahead of Gerrard. I wont mind keeping our game changers like suarez, Sturridge and Coutinho on the bench. Play the right tactics with the rest of the players and we can still win this and in case we need to bring any of the three or all three we can always bring them

BusterLfc wrote:I'd go with the same line-up against Fulham except for Agger starting instead of Toure

Pretty much this and if Johnson is available, throw him in instead of Aly as well. Also if Hendo's broken wrist is bothering him then Allen can start. but that's as far as I would want to go.


I think Arsenal would be terrified to have a replay at Anfield what with their insanely tough schedule, so we should go in ultra defensive and counter attacking. Let them come at us and hit them on the break.

First team with agger in. Forget the cup, if we knock arsenal outta the cup at their own back hard, it'll have a big effect on them psychologically that could see their league form suffer. All the pressure for this game is on them. Sit back, enjoy and trust Sturridge.

'I will play a team who has a good chance to qualify,' Wenger added. 'Will I rest some players? I don't know yet.'

I dont know what Arsenal fans are thinking but Wenger has got a complicated situation here.
1. Getting thrashed by Liverpool 5-1,
2. Drawing with ManUtd at home, where i heard their performance was not good enough
3. Then they have got Liverpool playing at Emirates, where they just can not afford to lose because of many reasons
4. After that they have Bayern midweek, where they have to show some pride and put in a good performance
if Wenger fields his strongest side on the weekend, he is really risking both CL and EPL, whatever you say but it takes toll on players, they have to handle the whole Feb month with the same squad where the depth is so great as City or Chelsea...I am really worried about them

Btw, if I am Wenger, i will field the resrves side with few senior players and win such a game 1-0 on the counter

Natalie Portman wrote:First team with agger in. Forget the cup, if we knock arsenal outta the cup at their own back hard, it'll have a big effect on them psychologically that could see their league form suffer. All the pressure for this game is on them. Sit back, enjoy and trust Sturridge.

Pretty much this, If we beat them again that too at their home when they are out to prove the 5-1 wrong, They'll hit rock bottom.

Don't know how seriously Arsenal are taking their chances in CL against Bayern. If I was them, I'd pretty much give up on that already and focus on FA Cup and league.

Think the pressure is higher than ever on Venga to win a trophy and he knows it. FA Cup is good start.

Think Rodgers might be thinking along the same lines, but the last thing Arsenal and Venga want is a replay at Anfield. Another game added in their already congested schedule would be a killer for them. Think for them this game is a win or a lose but absolutely no way draw.

So think we should go ultra defensive and play on the counter. Arsenal will surely throw numbers forward leaving us with space to exploit.

Rodgers: "We want to win the FA Cup - that's our objective. We won't need to rest anyone on Sunday."

I think that Liverpool can really get into the heads of Arsenal with a win here, and on their current form I wouldn't put it past Liverpool at all.

In this game all of our shots that would normally hit the upright will go in. It will be a fabulous match.

I think that Liverpool can really get into the heads of Arsenal with a win here, and on their current form I wouldn't put it past Liverpool at all.

In this game all of our shots that would normally hit the upright will go in. It will be a fabulous match.

long time needed in this section

If there comes a time when we'll have to choose between winning FA Cup and finishing in top 4, I'll be pissed.

I don't want to us go into the deeper stages of FA Cup since I don't believe we will possibly win this and this adventure will just be a waste of energy in our pursuit of top 4.

Having said that, we'll probably win this game given that BR will field our best XI as compared to Arsenal, who will field their second-string side.

Page 1 of 5
Permissions in this forum:
You cannot reply to topics in this forum
Latest topics
» The Gospel of Gabriel Jesus according to Pep