I have been thinking about it all week.. given the importance of Citeh, we HAVE to rotate at Napoli.. But I have a feeling AW will not want to take any chances there and we will have to field a stronger team there.. 4-0 at San Siro brings back a haunting memory..

I think, just like the Yanited game, we will be knackered for the Citeh game and drop 3 points.. That won't be all that bad if Soton pull off a win tonight and we pull off a win against Chavs after that.. Fingers crossed man..

Diaby in l'Equipe today : "The idea of giving up football had crossed my mind. Then, I talked with the Boss, and chose to fight"

Diaby : "Yes, i follow the french team. But priority is to come back with my club. I will take my time, i want to be back for good"

Remember that Bad buys 4 life rap? on park and Bendtner

Will have Napoli-Arsenal preview tomorrow night after work.

Darren ‏@DarrenArsenal1 wrote:Asked Ivan about the Bergkamp statue unveiling, only reason hasn't happened is they want to do it with him in attendance So waiting for him to be available for the unveiling. Ivan also said they 'could' be a surprise other statue also unveiled.

Not sure about that, good question though.

I think this will be our line up.

Szczesny
Jenkinson Koscielny Mertesacker Gibbs,
Flamini, Ramsey
Walcott-------- Ozil-------------Cazorla,
Giroud
Hope Podolski makes the bench at least and get some minutes if the game is tied.

Here's a question that's been picking my interest lately: You guys have been in control since the start of the season (well, the Villa game excluded, obviously). You've got a bit of a gap and have had for a while. Playing well and coping with injuries. How come I've seen next to no excitement from Arsenal fans about the very real possibility of winning the Premier League after so many totally dry years?

It's because we've been down this road before and have come up short. In the 07/08 season, we had a four point advantage going into final couple of months but blew it after Eduardo picked up that injury. In  the 10/11 season, we were challenging for the title and looking strong until the Carling Cup final at the start of the March, which we lost and then proceeded to only win three of our remaining league games. Both times we had a strong squad playing excellent football, but still managed to capitulate.

While this current squad is mentally tougher than those squads, we've pretty much been conditioned to expect a slip up whenever things start going well; a bad injury, a bad defeat, an injury crisis, bad mistake costing us a game... just something like that. Hasn't happened yet, but we've got such a long way to go in the season. So while we're enjoying the season so far, we know better than to get too carried away. The manager and players say very much the same thing: we need to stay focused and committed, we need to take things game by game, etc.

If we come out of December still leading the way, though, expect the excitement levels to jump up.

Haha, I certainly do!

Art Morte wrote:Here's a question that's been picking my interest lately: You guys have been in control since the start of the season (well, the Villa game excluded, obviously). You've got a bit of a gap and have had for a while. Playing well and coping with injuries. How come I've seen next to no excitement from Arsenal fans about the very real possibility of winning the Premier League after so many totally dry years?

It's very easy to get carried away in this good form but as Jay said, we're used to expecting the worst, so while we're all very thrilled (could hardly ask for a better season so far) it needs to be curtailed until at least after another couple of months if we're still leading. 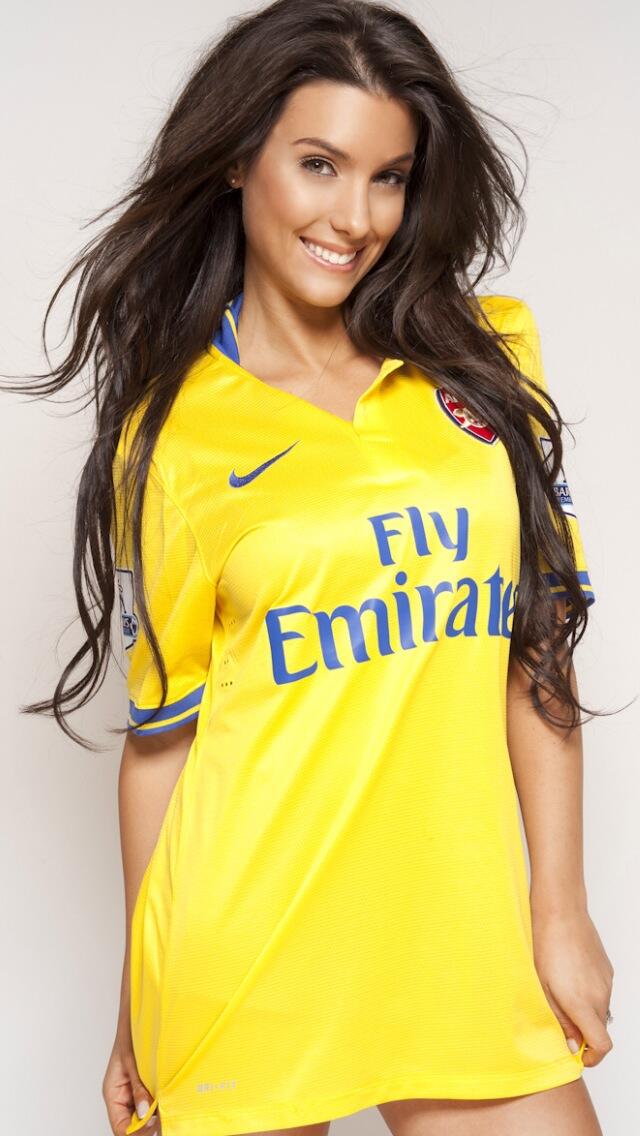 we will  keep her even  if Bac leaves

She is great looking but have you heared her talking? Her voice doesnt suit her face.

i know, i know

Ffs even if Wenger's voice came out of her mouth I'd still be all over that.

Verm's bird is better.... should sign her up too

MJGunner wrote:Ffs even if Wenger's voice came out of her mouth I'd still be all over that.

MJGunner wrote:Ffs even if Wenger's voice came out of her mouth I'd still be all over that.

WHHHAAAA!!! MJ, I'd expect that to be a complement! Wenger <3

Sandwiched between a piece on Barcelona's new Intel deal and FIFA wanting to get tighter on doping, Peter Staunton writes this:

"Arsenal will fall away in the race for the Premier League title as they face a gruelling trip to the Etihad Stadium this Saturday lunchtime. The time is upon them to prove their credentials and show they have the stomach for the battles ahead. But the Gunners are teetering.

Although they are five points clear at the top, nobody genuinely expects them to hold that position come the end of the season. And given City's home form, that lead will be eaten into this weekend if Arsenal come up short.

They are on a poor run of form, all things considered, after failing to beat Everton and being relegated to second place in their Champions League group. Those matches were chances for Arsene Wenger's team to show their capabilities to lead from the front and establish themselves as contenders. They failed on both counts.

What we are about to see now is Arsenal's bright league start diminished. They were lucky in the sense that they did not have to play the Premier League's better sides while rivals took points off each other early in the season. Their one big test, a visit to Old Trafford, resulted in failure.

Simply, Arsenal are not strong enough to win the Premier League and already the excuses are being made. Wenger and Mikel Arteta are complaining about the scheduling of the City game, ignoring that the television company which sets kick-off times is the same one which provides them with a good deal of their income. You can't have it both ways.

After Saturday, Arsenal will be no closer to winning the Premier League title and will be shunted into the category of also-rans, despite still being top of the league. "

Hatred and rubbish I can understand. But to spew that regularly on a column? This guy just has to do it every single time he writes. If he were writing a report on a beach football tournament in Hawaii (which he doesn't even has the minimum credentials for, as a "journalist", in the first place), he would still find a way to take a dig at Arsenal.

And he works for Goal.

Probably the shittiest sport journalist I have ever come across.. and he always has to find a way of crapping about arsenal.. no matter what he is writing about

What I copy pasted above if from his column on Barca Intel deal.. tell me, how is it even related?
I always ignore his columns and reports.. i got tricked into this one cuz i wanted to read abt barca intel deal..
And this comes today.. yest he did a piece with some other journalist and this guy went on abt how arsenal's season is over cuz we lost to napoli..

Yeah. Sure. That, coupled with everton draw and losing at OT 3 days after winning away to BVB means end of the world.

BVB is the toughest team we played, and we won away to them,. Keep hating and underrating us, we don't need people to talk abt us winning the league. If we play the way we have, then we will be there in May.

Winning against Spuds and Liverpool mean nothing, but drawing to an in form everton means everything now. L.O.L.

and why the fack do we always have away games against top 5 teams after away legs of CL? in march, we play away in return leg of R16 of CL followed by Spuds away, Chavs away and City at home.
when do we play at OT? 3 days after BVB.
away at Etihad? 2 days after Napoli. TWO!
FA should go fack itself.

I am beyond livid right now.
And despite all this, Arteta or Arsene don't have the right to fret about our fixtures? WTF:

I dont understand, why do they hate arsenal so much? i mean what did we so wrong that they started to hate us?

as for above post less expectations,less pressure,more motivated players to prove doubters wrong i see only winner there and so many that can potentially look like clowns so chill mate

What grates me most about that is his use of absolutes. Arsenal will lose to City, Arsenal will fade away, Arsenal aren't good enough, etc. Okay, but why? What's his reasoning? That we lost at Old Trafford? Why is not winning in two games suddenly a bad run of form? I generally don't care what agenda a journalist has, so long as he attempts to give a decent argument backing up his opinion.

Unfortunately, this is going to be the case all season long. We could be top in April and there'll still be articles predicting Arsenal to slip up because we have that stigma of being a team that capitulates when the pressure is on and the going gets tough. We could beat City and Chelsea and they'll just say that we haven't proven anything until we've lifted the trophy. That's just the world of media and journalism for you.

It's easy to feel victimized but it's worth bearing in mind that a lot of clubs suffer from similar treatment.

Page 1 of 40
Permissions in this forum:
You cannot reply to topics in this forum
Latest topics
» 2022/2023 Premier League Discussion