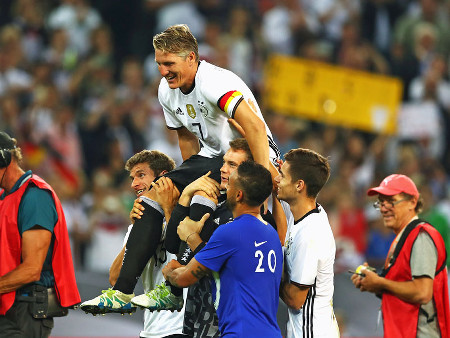 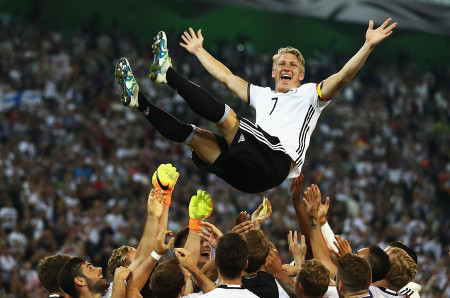 And the new captain: Manuel Neuer! 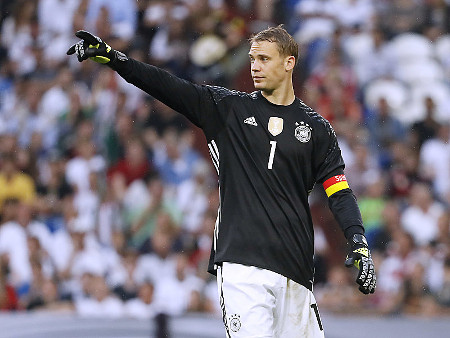 I cried like a Schlosshund when Schweinsteiger did.
Hit me right in the feels.

I will be crying if kicker is correct about the line ups for today's RambaZamaba. I dont know what a RambaZamba is, unless it means a scoreless draw?

Well, Thomas Müller managed to score a typical Müller goal now - not exactly a beauty, but a triumph of will XD

To be fair, 'Ramba Zamba' is a pretty good term for what has been going on so far.
Very entertaining if a bit wild.

Kudos to the Norwegians for remembering they are allowed to attack

Good attack by Norway right now. But that was a bit lazy by our defenders

Kimmich, nice finish and good game from the youngster.

Joshua Kimmich scored his first goal for the NT

(And Thomas Müller with the assist...)

Sadly, instead of a striker we have that small bulgy lump of dough with the face and body tension of a seven year old that is Mario Götze. Can't believe what a shit player Götze is.

If only Lewa moved to Germany as a kid

Jogi Löw should have called up André Hahn

I think Hahn is the best option for striker....at the moment.

For what? Being a small bulgy lump of dough with a stupid face?

The grace of a swan wearing ice skates, but he's just so darn effective! #Müllered pic.twitter.com/75zwQG4wYt

Norway were shit though, right? I mean sure, some of it was us dominating the match, but they were mostly crap, right?

BTW despite his two or three shitty passes in the first 30 minutes, Höwedes is the god of tackling. GOAT.
Liked Özil in this match a bunch, Kimmich and Müller great as well. Draxler made great runs, very good spacial awareness, and definitely seems to want to score.

Hummels, at times, looks like prime Beckenbauer when he dribbles forward from the back line, did also f*ck up once or twice, though, like the Kaiser wouldn't.

Special shout out to Brandt, who came on, and was great immediately. Will keep Müller on his toes in the future.

When Julian Brandt got into the DFB dressing room yesterday he was frantically searching for his usual jersey with the Nr.24. In the post match interview he admitted that he was at first shocked and feared he wasn't in the team at all. Only a little later he was told that he was now given the Nr.7 that was formerly Bastian Schweinsteiger's number.

Page 38 of 40
Permissions in this forum:
You cannot reply to topics in this forum
Latest topics
» The Official Dwayne Wade <<<<<< you thread