They could potentially get 15 points from their next 5 games without a manager.

Rooney is back from suspension. He'll carry them. Moyes is crap, but United is still a threat.

Anyway, Zabaleta has done his hamstring. He'll miss the Liverpool game too (Aguero's the other).

David Silva is 1 yellow card from suspension. Let's hope he picks up a card against Fulham.

Apparently Micah Richards is also out, so they have no right back to cover Zabaleta. I hope they stick with Pantil as well, he has butter fingers, can't hold onto the ball from a shot / cross. Only bad news for us is that Kompany is back and pretty much carry's City defence on his own and they're attack is still deadly.

With all that said, we always give City a game so it's looking positive.

Chelsea just played 120 minutes against S'land and were kicked out of the CC. They pretty much had "team B" out so don't think it'll affect their performance level against Arsenal.

Rooney's out injured. No time on it yet, but hopefully misses the "easy" games in December. With RvP and Carrick out, they'll struggle.

David Moyes says Wayne Rooney is injured & when asked if he will be fit for the festive season, answered "We hope so"

*bleep* sake. Do people now see my "pessismist" posts of ys dropping stupid points away from home as a problem yet? United's one game behind us ffs. One.

Everyone was adapting to their manager. Something we already had the edge over and didnt take advantage of instead decided to play stupid away from home (and a a stupid game against Soton @ Anfield). So yes, even if we did look all high and dandy at the start of season, we dropped stupid points that WILL affect us come March / April next year. 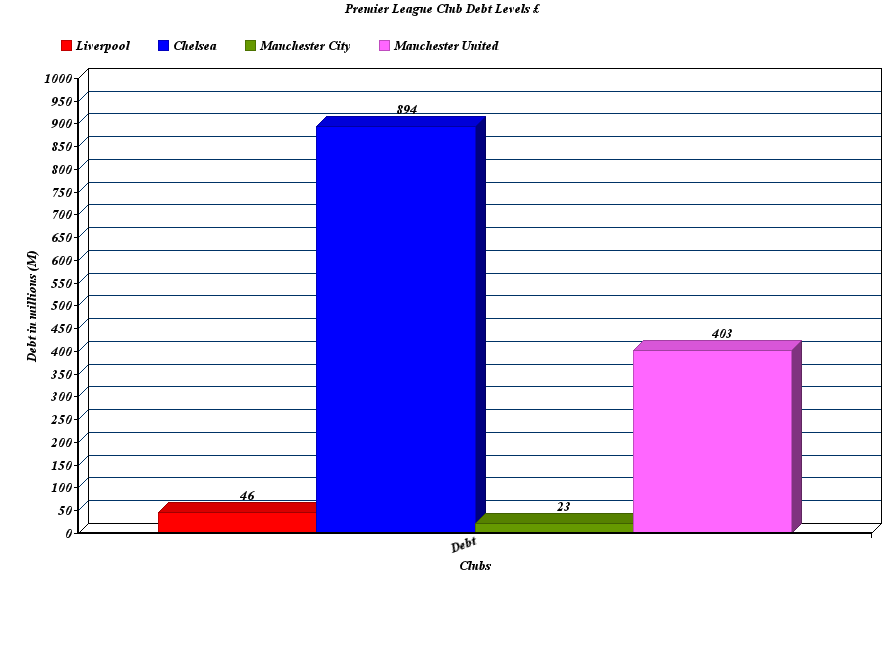 Our debt in the last accounts was between £80m-90m, mostly to banks, partly to FSG.

Chelsea's "debt" is interest-free, to Abramovich. I think it's only there in case he sells the club, then he can collect the debt from the club's new owners (but obviously that's something that would be settled in the sale transaction).

So Chelsea is basically the same as City, who have no debt.

United are in large debts still, but on the other hand are the ultimate money making machine of the Premiership.


When it comes to money, we're the worst off out of these four clubs as our current spending seems to be financed by bank loans.

They are only 2 points behind us and with a better squad, united are a massive threat for that 4th position.

after everton dropping points, we are back in top 4. Seems like Stoke has become a difficult place to visit. Hopefully Sturridge will be back, but better not to rush him , we will be fresh against stoke. So if we play our game, we should win it

They wont have their danger man assaidi =].

HEIL MEIN REDS wrote:because these are the games we have to win as we have lost last two fixtures

Yeah, precisely. If we lose to our main rivals, we need to make up for it in matches like Stoke away - who have now beaten Chelsea there and drawn against Everton.

Damn you Swansea, Cardiff and Southampton.

Good stuff. Next matchday has tricky away game for many of our rivals as well as ourselves. Should be interesting.

McAgger wrote:Good stuff. Next matchday has tricky away game for many of our rivals as well as ourselves. Should be interesting.

Everton and Spurs have Norwich and Palace at home....and we play on Sunday. We could be 6th by the time we play Stoke, so there will be pressure.

A win there would be bloody amazing, and set us up very well. Thankfully, we'll have Sturridge on the bench at least !

Chelsea are away at Hull. Arsenal away at Villa. City away at Newcastle. Even United have a tricky one with Swansea visiting. We just have to make sure we do the job in our match and there's a good possibility that some of them will lose points.

McAgger wrote:Chelsea are away at Hull. Arsenal away at Villa. City away at Newcastle. Even United have a tricky one with Swansea visiting. We just have to make sure we do the job in our match and there's a good possibility that some of them will lose points.

I can see only City drop points at Newcastle. Chelsea have found winning form. I watched Villa v Swansea the other round and Villa had about 30% possession and couldn't create anything, not even counter-attacks, (yet still they somehow drew 1 - 1). Even if Arsenal concede I'm pretty sure they're going to find the net a few times, too.

tbh, i dont see anyone dropping points among top 4 contenders

Chelsea is winning 2-0 ATM (93 mins). Will top the table till tomorrow.

Tottenham & Everton both winning. Both leading 2-0 at 78 mins.

Anyway, the away form comparison between other teams:

Liverpool and City have been dreadful away from home (although City have improved their away form in the last month or so) this season. If we improve on the road (and stop with this counter-attacking / half-arsed performances) we'll get into the top 4 if we manage to continue our home form.

Well you also have to consider that we've had to visit all of the top 10 or so teams away from home except United. We'll do better second half of the season I'm sure. Considerably tougher away schedule than every single one of those teams.

All teams around us winning yesterday really puts pressure on us to win today. Lose and we'll be only two points ahead of "crisis-mode" United.

Arsenal's some what bottled it. They needed a striker in the summer, and instead signed a number 10 in Ozil (who is class) and now they're struggling. Chelsea / City to fight for the league I think.