We desperately need Fabinho for the CL final. Keita can be a big liability defensively. When Fabinho plays, there is a massive difference to how our midfield works.

Salah lately has been little off but even at his worst Salah can be useful such will be his influence.

Let's be realistic, I think it's safe to say that Madrid has overachieved this season.

Winning the league may not be much considering the quality of the domestic rivals, but the fact that they have managed to reach the final of the CL against all odds and through the toughest CL route possible, is something every Madrid fan should be proud of.

Now we have Liverpool in front of us, and I can't lie, I think their squad is better than ours and they are undoubtedly the favorites for this tie.

I think they are going to win, but there's a very small part of me that still believes in miracles and it's constantly and naively whispering: "...but what if?"

These last few years we have seen many things happen in football that go against logic and expectations, so honestly I wouldn't be lying if I said that I absolutely have no fucking idea how the game is going to play out. Liverpool could end up trouncing us. They could barely beat us. Or Madrid could somehow, miraculously get a win.

So I guess there's nothing much left to say except: See you next Saturday, guys and Hala Madrid!

we are a difficult team to beat, i'm really not scared of liverpool. they are also a side that can be prone to mistakes. my only thing is i dont want anything to get my heart rate up, with goals in minute 93. lets just get two early goals and close out on defense

it won't be anything close to miracle if Madrid wins, pls. You guys have Champions League pedigree like no other team in the history of the competition, as well as the best player in the world in 2022 so far. Along with a competent stable team with veterans and youngsters that can come off the bench to make a differences, as well as one of the most coveted coaches in the competitions history.

So please, stop underplaying your team's status heading into this final.

Liverpool is a young team. We are a team full of over 30 year olds

We've rode our luck so far as we have struck gold with our young players coming off the bench to turn ties around but at some point that luck will end.

Both Fabinho and Thiago are doubts for the final. Is that true Pool fans?

Whenever Demon goes on a dramatic rant on how we will lose the opposite always happens. I'm fully confident we got this in the bag

I had to re-read my post twice to make sure we are talking about the same post.

Where did I rant dramatically? I only said that I consider Liverpool the favorites and I think they are going to win, but that I still have a small part of me that thinks Madrid can also win.

What's wrong with that?

as far as i see it, it's a 50-50 final. Both teams have winners on their team, and they play with great mentality never to give up or lose.

The reason I'm leaning a little bit towards Liverpool here is that they have too many difference makers and their pressing has always been our kryptonite.

Madrid has also many talented players, but the most important one of all is Benzema. You isolate him and you've already killed 80% of Madrid's chances to score. It doesn't also help that our best players are now old and their performance can sometimes be affected by that.

Carlo has a stellar CV in the CL, but in my humble opinion, Klopp is better currently.

Finally, I think that Liverpool will go into this game with more drive and hunger after missing out on the PL a few days back.

Yes, Madrid has deservedly reached the final after knocking out all the best teams in the competition bar Liverpool. But objectively speaking, when I see how many times we came very close to getting knocked out and only through almost a divine intervention did we come back from the dead to win and go through, I can't help but wonder if this luck (or whatever you want to call it) will ever run out and if it's against Liverpool that it will.

I'm honest to god not downplaying our chances, I would love to win, especially in Paris because Madrid has some unfinished business there. But it's not really a crime to think that Liverpool (at least on paper) are the favorites for this tie.

And it goes without saying that this is one of those times where I hope to be proven wrong and see Madrid lift their 14th.

titosantill wrote:we are a difficult team to beat, i'm really not scared of liverpool. they are also a side that can be prone to mistakes. my only thing is i dont want anything to get my heart rate up, with goals in minute 93. lets just get two early goals and close out on defense


Pretty much my thoughts.

El Gunner wrote:as far as i see it, it's a 50-50 final. Both teams have winners on their team, and they play with great mentality never to give up or lose.

I don't think Liverpool and Real Madrid are equal in quality. All things considered, Liverpool have more sustainable talent in both offense and defense, and under most circumstances I'd say the odds favor Liverpool. I won't be surprised at all if you dominate us throughout the majority of the match, but we have an X-factor that seems to be able to tip the morale in our favor just long enough for us to come out on top when it matters most. I don't think that element is quite comparable to Liverpool's high work ethic. We don't really have that.

I don't know if it's experience or something else, but I'm past the point of boiling it down to luck or coincidence. If I had to bet, I'd wager that Liverpool goes through, but I wouldn't rule out our chance of winning even if you're the stronger team on paper. We already beat Man City under similar circumstances, and I suspect we have a better track record than any other team of winning against the odds.

Basically liverpool needs to finish their clear chances early because they'll have plenty. Real Madrid have been extremely good at capitalizing their chances that if liverpool only score 1 goal while dominating 75 mins of the match Real madrid just needs 15 mins to put 2 in. It really depends if liverpool finish there chances or not.

Would appreciate some preview from the Madrid posters. What would be the potential starting XI, the general tactics etc.

I don't watch a lot of football these days, so some help would be appreciated. One thing that confuses me is that Brazilian guy (Casemiro!) is supposed to be the holding midfielder but I generally see him around the edge of the opposition box.

The line up is anyone's guess. Ancelotti on the other hand already knows his XI as has been confirmed in his presser

Goalie and backline is set with Alaba back in full training. In the midfield judging by his rotations KCM will start. Valverde is needed to combat their lack of pace and strength. If he starts he will likely start on the right and shift inwards to cover for the 3 slow pokes, in attack you won't see him much so our RW will be effectively dead

The way we play now is trying to get Benz and Vini on the ball as much as possible. Vini only passes to Benzema so if you manage to mark Benz out of the game (impossible) then Vini will effectively go all superman trying to go solo over and over and getting frustrated. If you can't mark Benzema and let him get on the ball alot then he will get his connection with Vini going and they'll definitely combine for a goal

When we attack we do it with very few players as KCM are scared that they wont keep up when we get countered so if you stuff the right side (our left) with a fullback and a backtracking RW we will find it difficult to get attacking moves going. Vini and Benz combine for over 60% of our goals this season. They are the 2 danger men.

We will likely defend deep to protect KCM and try and hit Pool on the counter. And we can't defend deep so Liverpool will score at least 1 goal. If Van Dijk runs after Benz and Konate plus Fabinho stay on Vini Liverpool will control this game. We are also teriblr at defending set pieces not to mention never score on set pieces oursleves Pool will have plenty of chances to score

I can already tell you what the subs will be

If we are losing:

If we are winning

Whole world is with Real on this. It would be their first deserved, non controversial titulero. Liverpool is the most obnoxious modern team, with their fans and media propaganda.

halamadrid2 wrote:I can already tell you what the subs will be

If we are losing:

If we are winning

Only question is whether Alaba or NAcho will play although Carlo stated he will play Alaba.

Fede will be on the right wing. KCM in the mid.

Not really sure about KCM. On the one hand, their experience in the CL is unparalleled. On the other, bar Modric, the other two are horrible and very prone to mistakes when being pressed.

But, would it be wise to bench them for the younger guys in a game of such magnitude? It's a difficult decision.

I'll say one thing though, in case KCM is not working, I hope Carlo will not waste too much time to make his subs.

Just let Carlo do his job, he somehow got this dead team this far so he must know what he's doing, let him work bruv

what happened to Casemiro, and why all the hate or doubt on him? He is just 30 years old, and just as recent as 2018 or something he was Madrid's best player.

He's still very good and one of our best players. Rarely ever did we manage to control the tempo without him in the lineup.

It's just that some of his weaknesses tend to appear a lot against high-pressing teams, which is the case for Liverpool.

His only fault is that he takes all the blame for the dysfunctional midfield. He is having to cover too much ground and he's given too much responsibility on the ball than before

We're just going to ignore Casemiro's recently (and by recent, let's go with 2 seasons in) developed error prone ways and it has not been a one off incident either?!

This is obviously a dig at Hazard isnt it? 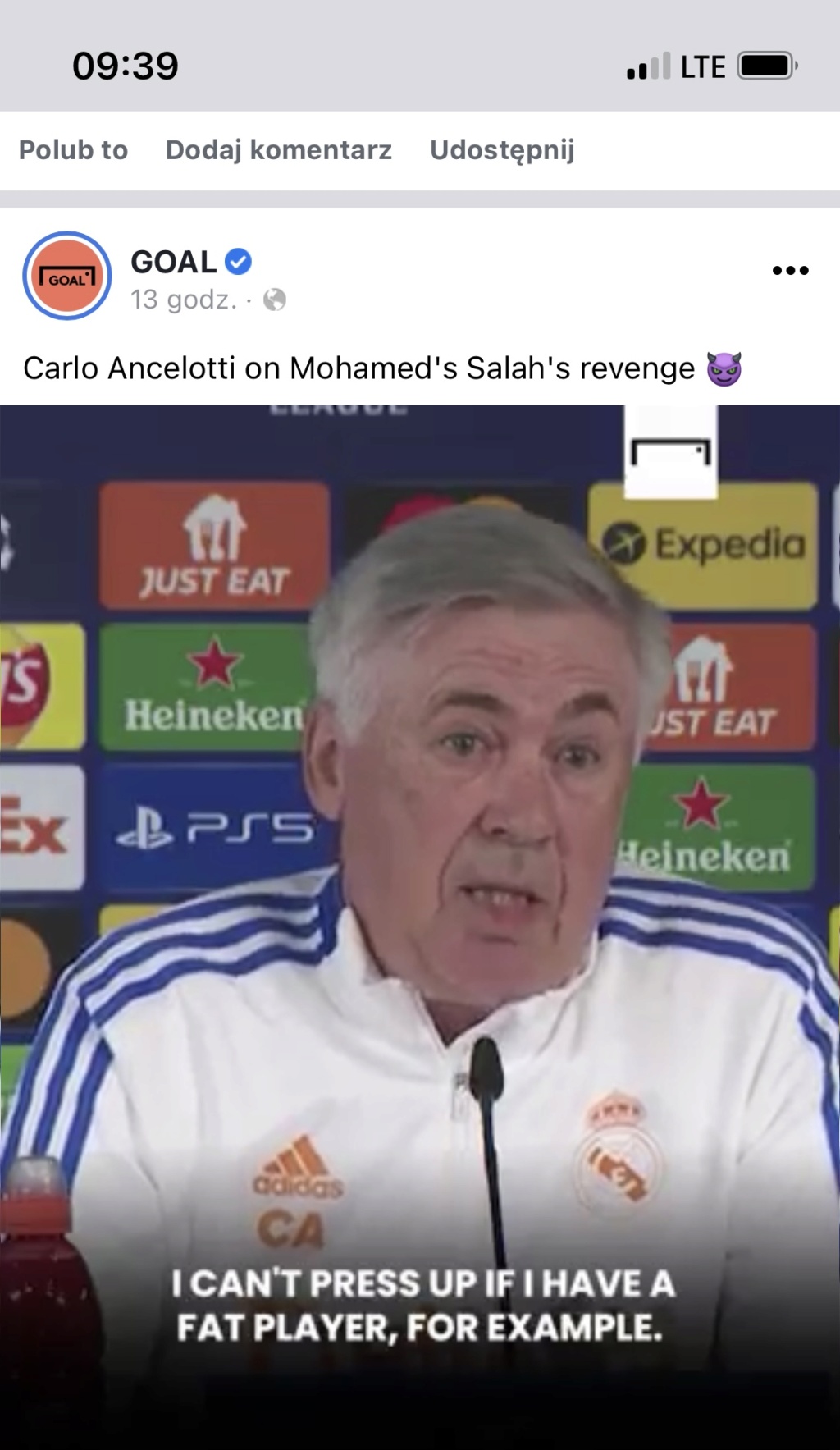