Blue wrote:Congrats to Madrid, what a run of teams to go through.

I thought Liverpool gave them the least challenging match, man what could have been if it wasn't for that perfectly placed pass by Modric in the 2nd leg.

I still have a hard time coming up with the right words to describe that pass. Even 'magical' doesn't do it justice.

Modric is just something else. One of the best signings in the club's history. 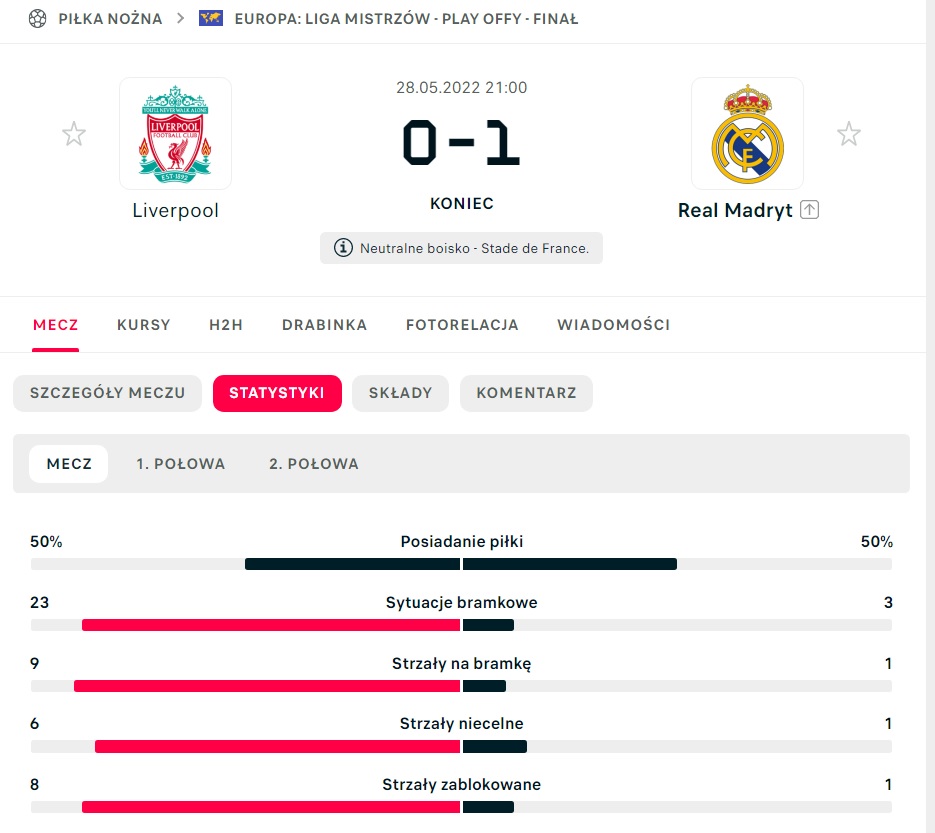 RM is the new atletico

^ If you know what you are doing, one shot is all it takes:

If anything that stat just highlights how we don't attack in numbers. Even on possession but unsurprisingly the team that attacks in numbers has the most shots. Hopefully when we move on to a more athletic midfield that stat will be rectified

If I am being honest and I think the player will think the same but the toughest game we faced was against Chelsea. Never seen the team so dead after the game. Chelsea really wore us out.

Yes, Chelsea was definitely the toughest.

Ceballos and Casemiro had open goals but for some reason they chose not to shoot.

M99 wrote:Ceballos and Casemiro had open goals but for some reason they chose not to shoot.


Well Ceballos gets an aneurism when inside the box. This is a known fact for years...

Casemiro, for all his great defensive work, has become absolutely atrocious with the ball. Really has. He was never great to begin with. But lately, he just passes it to the opponent. So shooting is likely the last thing on his mind.

Casciavit wrote:Madrid really went through the hardest UCL path ever despite being the underdog going into every match ffs

I dare say they didn't look like the better team in any of the knockout games but they did it the dirty way and always came out on top. You can get lucky once, not 8 times. There is a character in this team that know how to suffer but also know how to punish.

They didn't, but again CL isn't necessarily about who is the better team.

I made a lengthy thread a few years ago saying the recipe to win CL involves reducing the variance of the match as much as possible. Since they're knockout matches with high stakes these matches tend to be extremely chaotic.

Madrid was a side that tried to reduce that variance. They had a balancer coach who played to the team's strengths, so the players weren't put into uncomfortable situations by their manager. Against Liverpool, they weren't pressing high and they weren't building out from the back. He puts Valverde in as a winger to give more legs to the midfield, then plays Vinicius higher up the pitch to be an outlet. Sensible stuff.

Then they had Benz who was scoring from half chances, Courtois making world-class saves, and impact subs changing the dynamic of the game when they came on. When they needed to control the ball and reduce the tempo you had Modric evading 2-3 players, Kroos making those extra passes, and Benzema never losing the ball when holding it up.

Their players know how to suffer and that comes down to having reliable technical outlets that can relieve the pressure. It also comes down to the experience of former champions and the history and pressure that comes with playing in the Madrid jersey. So even if they weren't the better team in their matches they still knew what it took to win the competition. Obviously, they had good fortune go their way in some key moments, but you'll never find a CL winner who doesn't.

Wtf, I got the date wrong thought it was tonight looool..wtf, Real actually won AGAIN? Beating LIVERPOOL? Wtf is going on, going to watch the game now ffs...

Even at their old age they’re still the best at relieving pressure. The amount of times Kroos and Modric would hold the ball and evade pressure or Benzema would hold it up and almost always get a pass off. Their technical security is amazing.

Anyone who couldn't see it in this match should watch it again and learn. It's not about running around like a headless chicken (although that is useful sometimes).

Both Kroos and Modric absolutely bossed the tempo, and Madrid should have score more if they weren't shy about shooting (the shot statistic is poor, since it doesn't take into account the chances created that were not taken).

Just watched the game, n its pretty much the same shit again, Real only managed a few chances n got their goal. Liverpool created much more but Courtois saved well n with some luck n just couldnt finish the chances on the day they dont score. Mane hitting the post early on was sure a sign of things to come.

Valverdes 'pass' to Vini for that goal was pretty flukey, looks half a shot/pass dunno which, n prior to that Liverpool pressed but Real managed to beat it with a few nice passes starting from the back with Modric I think was... just another one of those from no where goals.

Anyway, cant explain this Real win, another incredible one, I mean WTF THEY WIN ANOTHER ONE? ANOTHER CL? Ffs...

Liverpool loses to them second final in 3 yrs ftw...

This definitely needs to be looked at by Klopp, even this game generally Liverpool were just too rash n not patient enough... although it is also something strange thats gotta do with Reals maturity n calmness. It seems all teams outplay them n yet on the back of everyones mind is that Real always could come back in it n as soon as the inevitable happens they mentally collapse a bit. So not sure exactly what it is, I really though Liverpool would be mentally strong enough n have the right mind for this game.

BarcaLearning wrote:Wtf, I got the date wrong thought it was tonight looool..wtf, Real actually won AGAIN? Beating LIVERPOOL? Wtf is going on, going to watch the game now ffs...

It's probably the most incredible CL run ever. Liverpool was pretty toothless in the final, after the goal it looked as if their souls have evaporated from their bodies and I knew they wouldn't come back judging by their reactions but at every stage of the knockout phase I expected Madrid to go out, they werent clear favorites, they werent superior to the opposition but they just won, responded to adversity and came back from the dead again and again despite having far fewer chances to score and often a leaky defense, though a stellar keeper.

What a way to put Premboys in their place though, whew, they were getting far too cocky

If you think about it all of QSG, City, Chelsea and Liverpool literally capitulated once we went ahead. Like they knew they couldn't come back or something

We were told about Liverpool being mentality monsters and how like us they always come back from the dead but i actually think it's a coin toss between them and QSG on who capitulated the worst. With Chelsea and City although they had their winds knocked out of them and stopped being a threat in OT still had their structure intact. Dissapointed after all the nonsense we were fed by their fans and thr premface pundits

Congratz for Real for the first real CL-win.

Imagine if this was PEP

First of all, congratulations to Madrid, Courtois, and Ancelotti. Well played. I’m heartbroken, but not disappointed. And above all else, I’m proud of our players, Klopp (and other behind the scene staff), our fans, and our owners.

Thank you, means a lot coming from you.

This RM team as I have said repeatedly are the real Men amongst the boys. They get things done and that's what separates Men from boys. Congratulations to all resident RM fans. This is a special team not necessarily the best but certainly a special one.

sorry i missed the bants last night, can't be bothered to browse through the pages, would have really liked to see Arq eat his crow as per.

Watched the match at my mum's house. My stepdad (who is a Dr. Umar level pan-africanist and huge fan of Mane and Salah) was big on Liverpool and saying how Madrid's defense was shit in the previous games. And i just told him none of that matters, Madrid will win it in the second half.

People get too caught up on who is the better team talk, end of the day it  about who wins and liverpool should have lost like 3-0 they know it as well, that besides the point I happy Carlo trusted that old, tired, and slow midfield all the way until the end, so know it all madrid fans can shut up now about athleticism, stop trying to shit on the players who won yet another trophy their gonna brag about on the internet, as usual this win shows once again how cr was actually carried by a great team and not him carrying them like I have been saying for years, where are all these people who said madrid will never have success again? Cr did sod all since he left while the team won 2 league and ucl, learn to respect players and not stupid narratives.

Mbappe already looking like a clown who is scared to compete, watch a real club at work with a real project, sport shut up about Flo such a attention whore going on and on about hating Flo who cares shut up, acting like you work for uefa or something, your so mad the team keeps winning and all your rubbish posts amount to f all be humble and shut up, you don't know shit vini scoring must be killing you inside too.

sportsczy wrote:Of course I'm just a poster.  I love trolling you lot.  Your skin (with a few exceptions) is thinner than rice paper lol.  Bill especially....

Couldn’t have made a better response than Chad!

Chad31 wrote:sport shut up about Flo such a attention whore going on and on about hating Flo who cares shut up, acting like you work for uefa or something, your so mad the team keeps winning and all your rubbish posts amount to f all be humble and shut up, you don't know shit vini scoring must be killing you inside too.

Just when you start feeling bad for Liverpool fans, they remind you why you shouldn't.

It was reported that there were 50,000 Liverpool fans with tickets yet only 20,000 were legit. That’s an incredible scam. The lineups were because the fake tickets were registering in the machines as invalid. UEFA is considering sanctioning LFC!