@El Gunner wrote:Smith Rowe is way better than Sancho too

Yea lets just compare a boy in a mid-table transitional club who has performed for half a season to Sancho who has had 3 straight world class seasons and just plain more ability to take the game by himself.

Both who happen to be the same age by the way.

Of course you'll bank on how he has been underwhelming so far in a United let by Ole and Ramrod Ragnick, capitalising lets use the word here but I do admire your loyalty to your club player he is no doubt fantastic.

But in the end there is no comparison.

"fantastic but no comparison"

do you realise you are making Sancho out to be some world class star? like you said they are the same age, so please, adjust your reasoning. Balling out in bundesfrauden and lighting it up in the GOAT league are two completely different levels.

And correction: Smith Rowe emerged end of December 2020, so it's been a year now of constant good performances, not just half a season

Im just going to come to the conclusion you have no record of watching the player given the obvious cognitive bias on his half a season with mostly sub appearances and the fact that he is a United player, to which I totally get. I hate United and rather am fond of Arsenal but it wont have me negate from the fact that you are comparing a man with 3 world class appearances lighting up the league compared to ESR who despite his "emergence" only has been at this level of performance for half a season.

Lets not forget his over 25 appearances in the Champions fucking League in which he was good basically each game. ESR? Like compare ESR to Saka not Sancho

There are levels to the game and unless he continues it beyond that compared to Sancho who has done it for more than twice as long, then its a null and void comparison not to mention he has played for England over 20 times just already.

Bundesfodder is a weaker league but the disparity is nowhere near as high as anyone says.

The comparison is just silly and not worth taking seriously and the moment Sancho does inevitably light up the league, when played correctly and not under a poor man's SAF in Rambunctious Rangnick then I wonder what you will say by then.


Anyway glad we can call Bundesfodder Bundesfodder now that RWO has vanished from the Universe and wont throw a fit over it. 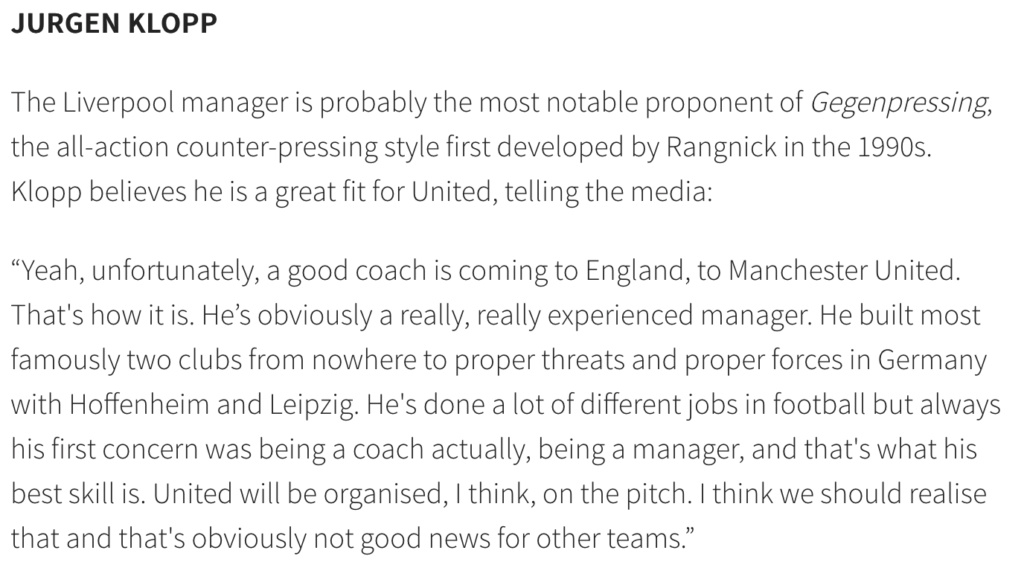 He's like a Bielsa/Cruyff figure to these German coaches, but they've all surpassed him.

His blueprint is the high pressing 4-2-2-2 with a heavy emphasis on counter-pressing when winning the ball. Maybe those guys all started out with those concepts, but they've all evolved to add positional and possession elements to their game. Especially Naglesmann and Tuchel.

I haven't seen that kind of adaptability from Rangnick yet. Even in interviews, he's very dogmatic about his approach. Counterpressing is his entire brand.

sounds on brand for a guy who once suffered from...

"chronic fatigue syndrome, stating he did not have "the necessary energy to be successful and to develop the team and the club"

also if that Schalke 2011 UCL stint was his peak in football, then yea

If Rangnick flops, United's ideal summer managerial appointment is probably Ten Hag IMO. I would keep Rangnick as the director though because I believe he would help United make smarter purchases than what the previous board did.

Almost all the elite coaches play a variation of 2-3-5 or 3-2-5 on the ball. You need the numbers high up the pitch against deep defenses, especially when you're managing a bigger team. It's not just about numbers, but you need coaches who can understand how to play against deep blocks if you're coaching a big team. 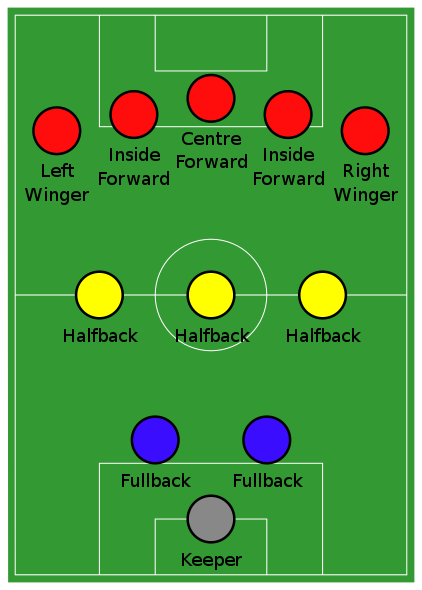 Guardiola repopularized their use in the 2010s. Now they've become more and more popular. Pep, Klopp, Conte (Chelsea and Spurs), Zidane, Pochettino, Tuchel, Naglesmann, Ten Hag, Arteta, Pioli, Xavi, Mancini, Pirlo, Luis Enrique, Flick, and I'm probably forgetting more names but all those guys tend to use either of those shapes when attacking.

Now the players who play those roles depend on the characteristics of players you have. Guys like Zidane, Tuchel, Conte, and Klopp usually played their fullbacks as wingers, their wingers as inside forwards, and their CM's right in front of the defense.

Then the new generation of Ten Hag, Nagelsmann, Xavi, and Arteta prefer to have one fullback act as a winger, and the other to act as a CB, meaning the winger on the opposite side actually stays on the wing. Ex: Pavard vs Davies & Sane vs Coman... or Tiernay vs Tomiyasu and ESR vs Saka. Mancini did this with Italy in the Euros too. Di Lorenzo played deep and narrow and Spinazzola acted like a winger when Insigne would cut inside.

Pep's approach has his fullbacks playing as CM's, his CM's playing as inside forwards, and his wingers sticking to their roles as wingers.

The point is there is always a player in each of the 5 vertical channels, and then there are players in the middle to cover the forward players' backs. Some of those managers on my list are more flexible with the positioning and then there are others who are more rigid. Guys like Naglesmann and Ten Hag are even more daring as you can see them attacking with a 3-1-6 a lot of the times too.

To me, it's clear modern football is going in this direction. Big clubs need to hire coaches who understand that and know how to play with these shapes since they give you positional superiority. Football is all about positional, numerical, and qualitative superiorities.

I think the days of telling players to go out there and have fun are over. Everything is hyper analyzed to the last detail. It's all about being as complete as possible in all phases. Having numerical superiorities in the build up, good positional play to progress the ball and to stop the counter attack, knowing how to create chances with possession, knowing how to press high up the pitch, knowing how to sit back and defend compact, and knowing how to counter attack.

Ultimately, if you are competing against Pep, Conte, Klopp, and Tuchel, then hiring a coach who is only world-class in coaching one or two of these strategies isn't enough for a big team in the modern game IMO.

@El Gunner wrote:pls i look forward to your apology when ESR continues outperforming this bum as the years go on

Not to stretch this out more than it needs to just want to know your basis for why he ESR is better.

Rangnick is just outdated and a power freak. He wants ultimate control of a club as if he is Wenger but has proven a very small sum in his rather average career.

He has no clue how to adapt as he runs systems well but isnt a remarkable tactician by any means.

@El Gunner wrote:pls i look forward to your apology when ESR continues outperforming this bum as the years go on

Not to stretch this out more than it needs to just want to know your basis for why he ESR is better.

just look with your eyes - ESR is a better, smarter, more varied skillset player all round. Plus ESR has that IT-factor that you think Sancho has.

He can make something happen out of nothing with his sharp short passes and strong running dribbling ability instead of having to be placed into the absolute right conditions and position on the field to get the most out of him (like it seems to be the case with Sancho). He has a bigger body frame than Sancho too (important factor in PL) without compromising any pace or athleticism whatsoever.

Agreed Cas. It’s a big part of why certain players who are talented are struggling. Football is an end to end game for 90 minutes. Every player has to pull their own weight. Messi, Ronaldo, Neymar, etc, (put james, ozil as recent examples as well) are struggling because fitness, off the ball, and on the ball work need to be all spot on. You can’t just have one. For example, Ronaldo has the off the ball work down, but he’ll never press for 90 minutes and he’s essentially a poacher, guy can’t even trap a ball right now. Messi still has magic on the ball but his fitness is far below the required amount and he can’t press either. Neymar is another example and his off the ball work is even worse then messi’s right now. The modern game takes no passengers. It’s end to end stuff. Mahrez for example, completely took all the flair out of his game, put on weight, and his fitness is outstanding now, which is why he’s succeeding.

The fitness and training aspect of football was always behind other sports.. but it’s catching up.. and so are the PEDs to make it possible. The player profile of someone like Haaland, a physical specimen and probably future ballon d’or winner is far different then the free flowing and unique profile of someone like R9. It’s a sign of the way football is changing.

@elfmeter wrote:you guys are so stupid that it really hurts my eyes t read any of your posts

City are an extremely dirty team. They commit so many minor niggling fouls in their press, and never get carded for them.

They wouldn't get away with this outside of the PL.

That being said, they are completely dominating Chelsea at the moment.

Highlight of the first half

Done, City wins the PL for this year.

@Lord Spencer wrote:City are an extremely dirty team. They commit so many minor niggling fouls in their press, and never get carded for them.

They wouldn't get away with this outside of the PL.


it's Pep team thing, they always do extra shit and usually get away with it

this Greenwood kid is talented.

Elanga is a baller. Man U looking so much better without rashford.. and sadly CR. It’s clear that Ronaldo has to play on the wing.

Disgraceful postponement of the arsenal spurs game by the FA. If arsenal has too many injuries or Afcon players that never caused a postponement before. Good on spurs for calling it out