He had a couple of other sick passes against Lille. Can you post those?

The pitch seemed pretty bad as players were slipping all over the place, but he placed a few passes on a dime

The more I watch this, the better it becomes.
It's a classic Messi goal. Create the play, AND finish it.

He picks up the ball in his own half, destroys 8 players (9 including the keeper) with two give and go's and a sublime finish.
Just Messi things


P.S. Notice the weight of the through ball to Mendes. It sets up a perfectly timed one-touch for the return pass. That attention to detail

_LMG_10_ wrote:He had a couple of other sick passes against Lille. Can you post those?

The pitch seemed pretty bad as players were slipping all over the place, but he placed a few passes on a dime

Lol KDB. They are raving about him because something that good is finally been shown in the fog islands, from where they can't see to anywhere else.

This was more than a decade ago, since then Messi has like 5 times more throughballs than the next one.

Yep, oppositions often just crowd in front of him to try n stop these, Lille seemed too open n MNM were all having fun out there

Leads Europe Top 5 in dribbles and assists, at 35.

Now leads europe in throughballs too

First player to score 18 consecutive seasons in CL, and against 39 clubs.

Gotta say he scores nowhere near as he used to be and misses chances he used to convert. He looks very human these days.

danyjr wrote:Gotta say he scores nowhere near as he used to be and misses chances he used to convert. He looks very human these days. 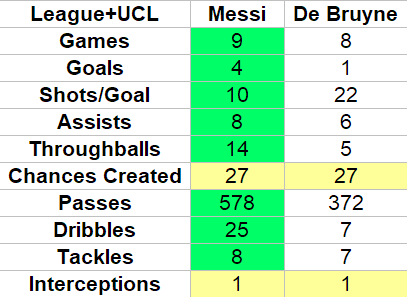 Most throughballs since 09-10 in Top 5 leagues

look at Wenger man so inspirational

danyjr wrote:Gotta say he scores nowhere near as he used to be and misses chances he used to convert. He looks very human these days.

His finishing has been off, but I think it just looks worst than it actually is. I'm not really worried about it.

I think it has more to do with him playing a different role and not needing to be the main goalscorer. He's got Mbappe and Neymar to feed and that's his main focus.

In his last few years at Barca, he was totally carrying the goalscoring burden. Suarez was pretty inconsistent and poor in his finishing in his last few years. Dembele was always injured and isn't a 9. Messi knew he had to score a boat load of goals.

You'd have to go back to peak MSN under Luis Enrique to the last time Messi had proper consistent goal-scorers across a whole season.

Nowadays at PSG, it's expected that he's gonna score less. That being said, yes, his finishing has been off, and you can see he's quite frustrated by it.

But I think it's a combination of less focus on finishing, and also a lot of bad luck (and maybe a bit of a mental block too).
The luck element is real considering how many posts and near misses he's had, even last season.
Perhaps, he's getting all of his bad luck out of the way now, so that when the world cup starts, he'll be ready to light it up.

Also, if you've noticed, he rarely ever gets into those positions from outside of the box where he can curl it in. Again, that's because his role and his team are different.

The thing is, when you've reached the heights that Messi has reached, there is no where to go but down. That is the truth.
91 goals in a calendar year, 50 goals in a league season...lol
We shouldn't expect that, nor anything even near it, especially 10 years later.

Good point, but yeah that's what I meant too. He's just looking more human but still a top player.

wtf is this camera work?

This angle is cold af pic.twitter.com/k8dLBt9bQc

What's with goal keepers turning into Yashin's against Messi? It's either that or a record number of posts, that's his PSG career. Again unlucky not to score a hat-trick.

imagine he got injured before the WC because of pitchside stewards

Career 90th goal for Argentina, including 10 this year, which is his second highest after 12 goals in 2012.

His finishing is still incredible when he cares/gives a shit. I dont even have a Messi shirt currently, will get Argentina's away with his name on it for the WC to support him even though they're in the group with us!!!

Friendssi prolific in friendlies as usual

Looking forward to his 0 goals in the World Cup and the plethora of heatmaps posted by his fans to convince us that he's actually a central midfielder for Argentina and that goals shouldn't be expected of him.

farfan wrote:Looking forward to his 0 goals in the World Cup

They said the same thing about him before the 2014 world cup and he did this in the first match:


By the way, he has 9 goals in his last 3 matches for Argentina I believe lol

Page 22 of 26
Permissions in this forum:
You cannot reply to topics in this forum
Latest topics
» World Cup 2022 - Quarter-Finals

Today at 10:46 am by Great Leader Sprucenuce

Today at 10:43 am by Great Leader Sprucenuce

Yesterday at 11:27 pm by BarcaLearning

Yesterday at 7:42 pm by halamadrid2

Yesterday at 7:11 pm by rincon