So how are for example Italian teams supposed to compete with the oil money clubs?

not to say club owners with +10 billion net worth can buy everybody in uefa and fifa lol. let alone the Saudi's who print money for fun.

the club football is ruined.

Lille is the reigning Ligue 1 champion.

City isn't winning EPL because of money... they weren't dominant at all before Pep became their manager and the new owners had been there 8  years before that.

Man U, Chelsea, Arsenal if it wanted, Liverpool if it wanted...  could all spend as much as City.  In fact, I think Man U has kept up lol.

Here's the total roster market value by club in Europe as of April 2021 btw: 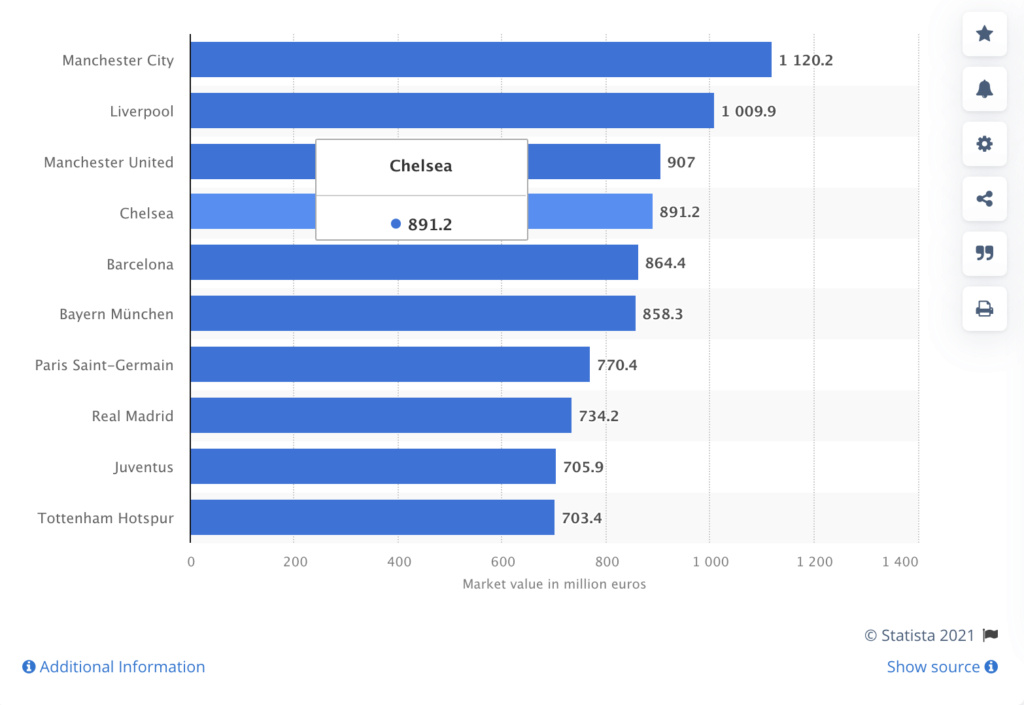 Jesus sports, your last post has so many inaccuracies and misinformation, I couldn't even summon the necessary energy to respond.

What a time to be alive, Mole .

rename the thread to Sandcastle watch or something

Exclusive from me and @SamWallaceTel : Newcastle's new owners first approached Fonseca in the summer and talks have now reopened - but other candidates (including Lampard) not yet ruled out #nufc https://t.co/ZhunrSFWGe

It legit boggles my mind how this mediocre trash keeps getting touted at lucrative clubs. I know its Jorge Mendes, but still, the guy is ass. The EU should over-regulate Mendes' clients, fees, companies and everything because no way in hell is fucking Fabio Silva worth 5m.

@ES Wenger talked about the same thing regarding Portuguese coaches:

They just keep getting parachuted into top jobs over and over again.


who cares, the Saudis can fuck off, murderous fascist pricks


who cares, the Saudis can fuck off, murderous fascist pricks

People of middle eastern descent who aren't any of these things?

Junglecastles do not exist, unlike sand castles

Newcastle team of the 2020s

Junglecastles do not exist, unlike sand castles

Juxtaposing sand with anything when talking about middle eastern people just sounds iffy to me.

I am sure i named it a lot better.

tbh it is a huge mark against the sport that this move was even allowed to happen but hey, not much we can do as fans, I basically don't pay for anything football related anyway, I do feel dirty for quietly praying they buy our scrubs

Junglecastles do not exist, unlike sandcastles

The actual desert area covers around 50-60% of the country's space.

That being said, calling it Sandcastle or OilCastle isn't racist in referring to Saudi control. Nor would calling it Blood Castle by the way.

Firenze wrote:one of their CM's in that lineup is dead and still better than fred-mctominay (RIP Tiote)

A special moment - and a player fondly remembered by the Geordies. pic.twitter.com/JeuuQiWMek

I am glad he scored against us. I will forever remember him