His last season was really bad with us and a fresh approach was needed but given what has transpired over the last two years, can you blame any Juventus fan for being ecstatic over his return?

Mate, we avoided an Ole situation with Pirlo and that alone makes me relieved.

Besides, he's by far the best option in the market to guide us through this rebuilding phase and I'm glad that the management acted on it. Tried and tested and a safe choice.

I was definitely for him leaving when he did, his cycle had ended. He struggled to fit Dybala in during his last season and with Ronaldo, it made sense to make a short term push. In reality, that didn’t happen and the team deteriorated badly over the next two seasons.

Pirlo did what we thought. He’s an inexperienced manager and it showed. He didn’t exactly manage a transition but he did introduce new and young players that were signed and had to deal with veterans relied on by Allegri and Sarri respectively leaving (Khedira, Matuidi, Pjanic, Higuain etc.).

I’m very excited for Allegri to be back home. He’s my favourite manager of all time and I know he would’ve only agreed to come back with certain assurances.

Love this. Didn't want him to leave 2 years ago and love him coming back.

His experiments every season in terms of tactics was one of my favorite things about Juve in the last decade, his management of the matches and changing the game is GOAT, as are his press conferences. Sarri and Pirlo had me miss 99% of pre match conferences both live or via news sites. Max was always interesting and entertaining until the last season when he was just too tired and angry at the media.

A refreshed Allegri has me really excited for next season.

Also the way Juve's media team has been announcing Max has been great. The tweets about Minesota and the jacket cracked me up.

Firenze wrote:doesnt seem that long ago Juve fans were calling this guy a bum/fraud when they were being knocked out of the CL

He still is. I hope he's gone by Christmas

S wrote:His last season was really bad with us and a fresh approach was needed but given what has transpired over the last two years, can you blame any Juventus fan for being ecstatic over his return?

Mate, we avoided an Ole situation with Pirlo and that alone makes me relieved.

Besides, he's by far the best option in the market to guide us through this rebuilding phase and I'm glad that the management acted on it. Tried and tested and a safe choice.

Allegri and rebuilding is an oxymoron

Btw, Allegri coming back is just the latest proof that he's cancer

4 year contract too. Seems like a lot in this uncertain climate at Juve.

Allegri's Juve always started the season poorly, didn't they? Even when he still had a top squad. That it's no different with this mediocre bunch should not be a surprise, and I'd still expect some kind of upturn soon enough 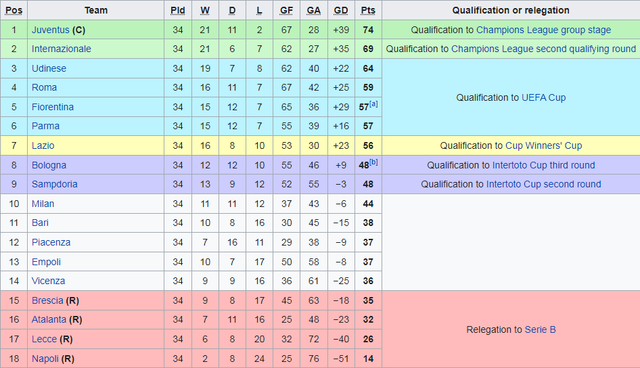 He should have never returned, the writing was on the wall, Juve state is dire at the moment, especially with their reported losses.

I can guarantee you a few things will happen next summer:

No way are you paying him his insane salary under this climate, he'll be booted and you will probably sign Romagnoli on a free if Raiola wills it.

Under which climate ? Covid ? we already offload Ronaldo's salary and we have worse big earners to cut before we touch the core

If De Ligt leaves it's because we have a shit season and he and Raiola feels it's better for both career and wallet. If we do good more likely than not De Ligt stays and if he asks for a raise we pay him. That's how Juve does business. I think you overestimate our problems, not sure if trolling, anyways Juve's management has a history of being competent financially (unlike Milan) and the delayed payments of our summer transfers give us more freedom on the market

Woj and Ramsey being sold would be fantastic news

Allegri needs time it's been 5 matches, the problem is mostly of mentality and automatisms, things that deteriorated heavily last year with Pirlo. We started winning vs Napoli, vs Milan, vs Udinese, and yet we failed to see out those matches. It won't change overnight

8 points difference ain't that big of a deal, but -11 points is making me nervous
-5 means we're already back in the race

I'm not too worried about CL results until the knock out stage, it's likely we get there

i never rated allegri, even when he was in milan and juventus, i think i have said this but much of great juventus allegri inherited was from Conte, and they still had star players back then.

that being said allegri needs time. i think juventus will be just fine, they were great against milan majority of the game and that just shows they just need fine tuning, and when many guys said here already but the allegri's ultra conservative approach sometimes isnt helping juventus.
way i see it, juventus are definitely going to make top 4, it is just that allegri cant make them scudetto challengers.

4th 1-0 win in a row. The lineup and available players has changed every time but the solidity remains. Allegri made Juve feel like Juve again.

8 matches since the Napoli draw yielded 7 wins and a draw.

Inter-Juve this weekend could be big.

Whats Allegri's secret? That he seem to guarantee these results, amazing

You got that right. We're baclk to being boring af again

Parking the bus and praying for some random goal. It has worked in the last few games, not so much at the start of the season. The only bright spot was the second half versus Torino, the rest was utter shit