This beautiful hipster joined Sevilla earlier this summer, and boy oh boy is he building quite the team. ( ͡ʘ ͜ʖ ͡ʘ)

But before we get to that, even though he isn't unknown, an introduction is needed:

He's a Bielsa disciple, so he preaches attacking football, high aggressive pressing, verticality and positional play. Not only that but his assistant coach, Juan Manuel Lillo, is the father of positional play and is Pep Guardiola's biggest coaching influence. Jorge Sampaoli was Chile's former coach and he added more control and pragmatism to their game (compared to Bielsa) and he ended up leading them to a Copa America victory, and an impressive 2014 WC, in which they were knocked out in the R16 on penalties, against Brazil.

All the tactical hipster nerds love him, and for good reason:

- He's stacking up on creative, and technically excellent attacking players.

- He plans on converting Ganso to a regista, à la Pirlo.

"You pick players to attack, you form them to defend."

"The idea is to come to any place and play the same way. We can win or lose, but the idea is not negotiated.

"One night, I went to a bar, I was with a woman. We talked all night. We laughed, we flirted, I paid for several drinks of hers.

At around 5am, a guy came in, grabbed her by the arm and took her to the bathroom. He made love to her and she left with him. That doesn't matter because I had most of the possession on that night." 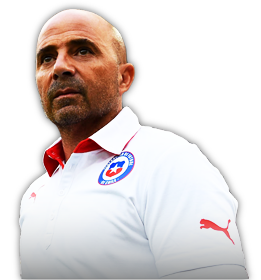 In Sampaoli, we trust.

Prediction: Sevilla will make it to the quarters in the CL, and will finish top 4 in La Liga.

Spoiler:
If you care, and want to actually read up on his playing style or watch some videos on his teams, here are a couple of links:

Vietto's upside is much higher than Gameiro, though at the moment Gameiro is slightly better. I think in the long run Sevilla got the better deal here.

Franco Vazquez and Ganso are really good signings. Easy replacements for Banega (who for whtever reason played as a defensive AM

) Emery's tactics were too defensive.

Konoplynaka will finally be able to flourish properly under Sampaoli as well.

Definitely looking forward to this Sevilla more so than the Emery one.

Watching them yesterday when they played 3-2-4-1 and they dominated the ball but looked unsurprisingly short at the back when they were countered. The right and left centre backs were coming up to overlap the RW and LW ffs

They played 4-2-3-1 in their other three friendlies, and I think that'll be the one they'll use most often. The team is already pressing high, and signs are they'll be less direct than Sampaoli's Chile team and keep the ball for longer. They can't really play any other way having stacked up on wingers and AMs.

Seeing a new team every season is part of following the club, but this transition is the most interesting and exciting. Sampaoli's approach is completely different to Emery's and the club captain, it's best DM, playmaker and striker have all been sold. Where Emery would stock up on DMs, Sampaoli asked for more creators. Even after they signed Ganso, Vazquez, Sarabia, Kiyotake and Correa he was asking for Dani Parejo from Valencia.

They play Granada on Tuesday. Maybe they'll set-up like:

Which Kolo is this?

I see he was born in france to polish dad. About time he gets called up to Poland

Why did Atleti give them both Vietto and Kranevitter?

Atleti and Sevilla share a good relationship. Both equally dislike Madrid and Barca.

Vietto was out of favour at Atleti and was part of the Gameiro deal. Kranevitter's just a normal loan deal.

How many L's can one club take ffs

He will barely be missed, Krane is a gem

I'm quite looking forward to watching this Sevilla team, to be honest.

Sevilla playing Granada tonight. Back to boring old four at the back:

Could well be the team that plays Madrid in the Super Cup next week.

Should be an interesting game. Paco Jemez has a similar playing philosophy to Sampaoli.

The arrangement there suggests three at the back, but I think it'll be a 4-2-3-1.

I think this is the best Sevilla team i have seen since the Kanoute/Fabiano days. Really well structured and pressing was in sync. At times i thought they overdid it with passes between gk and defenders which allowed us to intercept the ball in their half. Expecting them to challenge Atleti for third spot this season if they keep playing like this. Really impressed

Why didn't Sarabia start btw? He didn't even make an appearance weirdly

I agree hala. I think they have the weight to make waves in national competitions and maybe even a run at CL.

Sampaoli was a great selection for Sevilla imo

Lets see how Sevilla does this season. 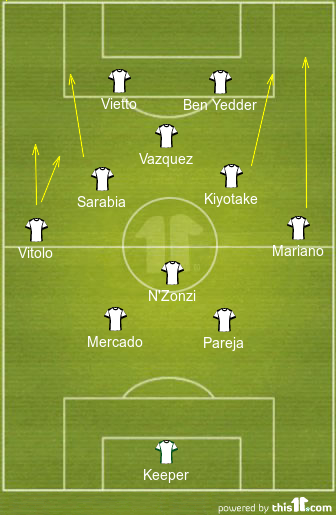 So in the four competitive games played so far there's been a different team and slightly different formation. Last night's team was weird because Vitolo wasn't playing as a midfield, but as a wing back. I don't know if injuries have forced Sampaoli's hand (Escudero, Rami, Carrico, Kolodziejzcak all out) but it's telling that he'd rather a winger play out of position than play a centre back there (young Diego Gonzalez was on the bench).

They made heaps of chances but predictably there was a lack of cover during transitions and a high number of turnovers in midfield that put a lot of pressure on the back two and N'Zonzi. N'Zonzi basically had to be perfect to prevent any counters.

It's something he has to sort otherwise this project won't last long.

Yesterday at 11:52 pm by Nishankly

Yesterday at 9:40 pm by Harmonica

Yesterday at 9:11 pm by Cruijf

Yesterday at 7:39 pm by Robespierre

Yesterday at 7:23 pm by Kaladin

Yesterday at 4:49 pm by Myesyats

Yesterday at 4:35 pm by Hapless_Hans

Yesterday at 10:08 am by Harmonica

Yesterday at 2:41 am by McLewis

Yesterday at 2:30 am by McLewis