Inter have made an approach towards Juventus target Gabriel Barbosa.

“We have spoken with Inter, but to date we have not received any official offer from them” said Barbosa’s personal agent Wagner Ribeiro to Sky Sports.

Inter Sporting Director Piero Ausilio made a phone call to ascertain the value of the player and necessary costs. €25 million is the asking price for the 19 year-old Brazilian starlet.

Ausilio has connections with the player’s agents and the player himself. Kia Joorabchian and his agents (including Ribeiro) were contacted by the club after Ausilio’s go ahead to come to an understanding.

Juventus have an agreement with the player on the grounds of contract details, however, not with the club and agents. Gabigol’s father (who plays an integral role in the negotiations) is adamant that the player will only be transferred permanently and not on loan to a European club.

The attacker only wants to play first team football with assurance.

So far Juventus have not come forward with the €25 million, and Inter have not yet made an official approach either. Inter are reportedly willing to make a €30 million offer to beat out the Turin club. All parties await further developments between clubs.

There is a report linking us to shweinistiger. Tbh I would take at a heartbeat for 10m.

RealGunner wrote:Looks like there has been some misunderstanding between Luciano, Kick and Devi. Neither of you are taking about the same thing here.

Let's just forget everything and move on guys. No need for any of this. I am going to remove the irrelevant posts now so we can go back to discussing juventus transfers.

these two have seen the comments not only once

Gabigol just scored a great solo goal in a friendly vs Japan for the olympics.

Pjaca's agent is hyping him up "plays like a mix between kaka and CR". I wonder what our team will look like if he does impress to these levels, how can he make room for himself at this Juve? Cuadrado had it "easy" since he plays on the right side and Litchsteiner doesnt offer the same attacking game. But on the left (where Pjaca seems to play) there is already Alex Sandro.

Maybe he will be the one to switch us of our back 3. Christmas tree formation could do it, or a 4-4-2. He has a complicated role at Juve if he is to be more than Dybala's sub.

Having already lost Alvaro Morata this summer, the Old Lady aren’t prepared to lose another striker and have shut the door on any potential move for Mario Mandzukic...

Any sale of Mario Mandzukic is considered impossible by his club Juventus, after Barcelona were rumoured to be interested in a move.

Reports over the past few days have claimed that the Blaugrana hold an interest in the frontman and were mulling over whether to make a formal approach, and in the wake of that the Bianconeri have firmly put their foot down.

The Croatia international is considered to be one of a group of elite players whom Juventus chiefs deem indispensable.

Especially with Paul Pogba widely tipped to be leaving for Manchester United, the Old Lady are wary of creating an even bigger gap to be filled within their squad.

Mandzukic scored 13 goals across all competitions for Juventus last season, sharing the attack and creating a partnership with Argentine starlet Paulo Dybala.

Due to his importance in the side, Massimiliano Allegri’s team aren’t even willing to talk to Barcelona.

rincon wrote:Gabigol just scored a great solo goal in a friendly vs Japan for the olympics.

Pjaca's agent is hyping him up "plays like a mix between kaka and CR". I wonder what our team will look like if he does impress to these levels, how can he make room for himself at this Juve? Cuadrado had it "easy" since he plays on the right side and Litchsteiner doesnt offer the same attacking game. But on the left (where Pjaca seems to play) there is already Alex Sandro.

Maybe he will be the one to switch us of our back 3. Christmas tree formation could do it, or a 4-4-2. He has a complicated role at Juve if he is to be more than Dybala's sub.

Simple. He will play as a trequartista. That is Allegri's favoured formation, 4-3-1-2. Pjaca can play behind the strikers, Higuain and Dybala. Allegri likes players who are adaptable and flexible, Pjaca is perfect in that respect. I doubt we see much of a 4-3-3 without Cuadrado. With Pjaca and Pjanic I believe we will see more of a 4-3-1-2 formation. Rememebr this is the formation we used against Barca in the final with Vidal playing the trequartista. Chiellini was injured.

Im for the 4-3-1-2 as well. I just havent really seen Pjaca. From youtube he seemed more of an inside forward/SS. Lets hope that he can be more of a midfielder like Kaka could.

rincon wrote:Im for the 4-3-1-2 as well. I just havent really seen Pjaca. From youtube he seemed more of an inside forward/SS. Lets hope that he can be more of a midfielder like Kaka could.

Yeah I don't know much about him either, just the YouTube stuff.

But if he can be even half the player of Kaka and be able to play behind the strikers then we will have a real coup on our hands. Play Pjanic as the regista and the attack would be lights out.

I love Morata, but he didn't really have a defined position. He's not really a winger and he's not really a prima punta. Not even sure he's a seconda punta. I'm not really sure what he actually is to be honest!!

With Pjanic and Pjaca I think we will play more typical Allegri football. Juventus will play more with the ball at their feet, more slick passing and through balls. It will be less wide play imo. This will suit Higuain and Dybala better.

I am excited for this year. Too bad we had to sell Pogba. One more year with him and it could have been the mother of all seasons. Maybe the greatest season ever, with a treble in play.

But that's okay, he was gonna leave anyways, damn mercenary. Looks like it's gonna be Witsel coming in. I don't mind him. He's kinda like Pogba lite. But with all our other acquisitions I think they will make up for Pogba's loss. At the end of the day I doubt we have Higuain without selling Pogba, so I think we will be okay.

This season is gonna be a great one...

Juventus closing in on deal for Zenit midfielder...

Blaise Matuidi and Nemanja Matic have also been considered by the Bianconeri, but Axel Witsel has apparently been singled out as the man for the job...

Wantaway Zenit St.Petersburg midfielder Axel Witsel could finally be set to leave Russia with Juventus ready to wrap up a move shortly.

Clubs in Serie A and across Europe have long been linked with the Belgium international, with AC Milan having also tried to snare him in recent years, but this time may be different with Zenit willing to play ball over a potential transfer.

Juventus have now submitted an opening offer of €18 million for the player’s services.

However, whilst Zenit are willing to do business they would prefer a figure of €25 million to be paid.

With Paul Pogba’s move to Manchester United imminent, Witsel is seen as an able replacement at a fraction of the price.

Jose Mourinho’s United side are widely expected to confirm the arrival of the Frenchman at Old Trafford, for what is tipped to be a world record transfer fee.

Meanwhile the Bianconeri have had a swathe of midfielders to choose from as his replacement, but have decided to pursue Witsel over the likes of Blaise Matuidi and Nemanja Matic.

Witsel has completed four seasons in Russia with Zenit since his €40 million move from Benfica, winning three trophies in the process.

Im pumped to see how we will play. Last summer I wasnt so excited after our big 3 (Vidal and co.) left. Now its gonna awesome with Pjanic, Higuain and Pjaca.

Witsel looks like the answer. I have faith in Asamoah, Pereyra and Sturaro, but I guess the board wants immediate results. Very much Pogba lite. Lets hope it works if he comes.

Witsel is a very decent player, might not a perennial starter for Juventus, but i can't see him being a flop.

19:14 - MATIC PUSHES FOR LEAVE CHELSEA - Gianluca Di Marzio, through its official website, spoke of possible targets in midfield for Juventus: "Following the Pjanic arrivals, Dani Alves, Benatia, Pjaca and Higuain, Juventus tip another midfielder to complete squad available Massimiliano Allegri. the hottest names at this time are those of Nemanja Matic and Axel Witsel. for the Serbs '88 class of Chelsea, Juventus expect the conversation between the player and the company English will happen these days: he pushes to go away, because it would make a new experience. but there is an obstacle not just, Antonio Conte, who at the time does not want to let him go. Matic would be the first choice of Juventus, both for management and for Allegri. Juve has not yet made an official offer for Zenit. There are simple contacts were through an intermediary, and Juventus proposal Witsel on the other hand, according as it filters from St. Petersburg, was the 15 million: too few compared to the 30 who arrived at Everton, in these conditions Zenit does not accept. But even in this case is the player who could be an "ally" for the Bianconeri: Witsel it will expire and prefers Juventus than British., "Wrote the journalist of Sky Sports. 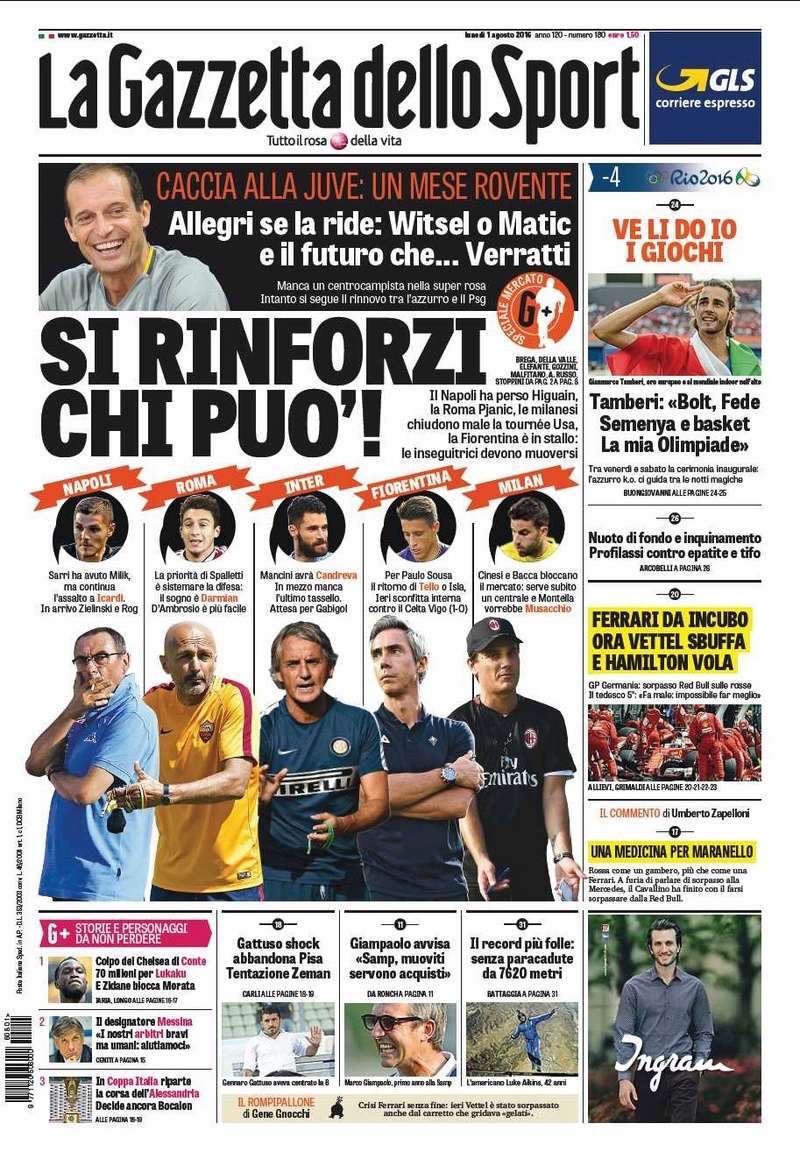 I'm more impressed by the guy who jumps without parachute from 7km high.

Wtf seriously, some people are crazy in their head

We can pull a deal for Verrati IMO... If we push for it, we can make it. It's a dream move, but again, we have to considee his recent injury problems. We could be Arsenal 2.0 if we sign him, as we will have Khedira Marchisio and Verrati all competing to get back to fitness and all will fight for that spot. Lol.

However, if we sign Verrati, then I would rate this market 10/10, and hopefully our problems with injuries will be less significant.

Veratti isn't possible in the next 3 years

or until his late 30. PSG wont let him go, he's the last player they'll let go

Page 40 of 40
Permissions in this forum:
You cannot reply to topics in this forum
Latest topics
» De Bruyne is the worst 80M€ player out there

Today at 4:44 am by BarcaLearning