RIP the man brought so much joy into my gaming life

Iwata was an inspiration as CEO. He embodied the fun parts of gaming, the smiles, and the wonder we can have in our hobby. He was humble, and worked through love of gaming and what smiles it can bring to us fans.

It gives me great sadness to see him leave. Not only was he a constant presence in the credits of all the best games I ever played (I always looked forward to seeing his name last) but he was a constant presence in our web sub-culture through his memes, Nintendo Direct hosting duties, and his Iwata Asks series.

All I can hope for is for Nintendo to continue on his path of smiles, despite all the mistakes, and honor his legacy.

You gave us many smiles, may your last smile be eternal.

“On my business card, I am a corporate president. In my mind, I am a game developer. But in my heart, I am a gamer” - Satoru Iwata, GDC 2005

RIP. One of the GOATs in Gaming industry. 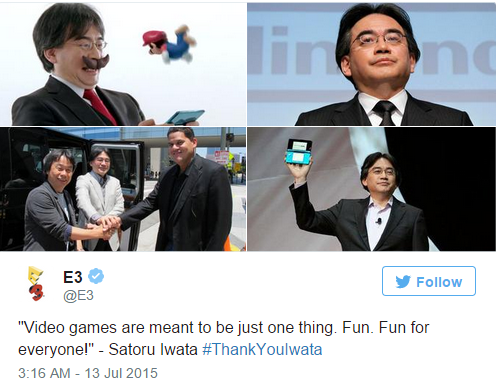 Nah in general, games are designed with competition in mind instead of how fun they are to play

Although Pro Clubs has been like that sometimes, was good in our last session though.

Driveclub is so shit lol.

Bought it 2 months ago, brb it's free now ffs. Only came out last September!

The PS+ version isn't full. Some of it is locked. But you only need to play 1 race and it should tell you how bad it is. No wonder it's made free and you can buy it for like £10 at CEX

Waiting for NFS. Really want to invest in a racing game which is good.

Taking photorealism to another level lol.

and then half an hour later, roll end credit lol

I am taking my time lol. Started the game 4 times now because i wasn't happy with it. Wanted to do the whole first mission without being detected

Can anybody explain to me why is everyone melting over Fallout? I've never played it and actually I don't see what's so special about it watching gameplays on yt.

It's an RPG, people usually wank regardless

Gameplay wise it's not special tbh, but people that play it like it for the normal reasons you like an RPG.

I'm gonna get it but i'm not exactly busting for it, especially as it comes out around all the usual sports games, star wars and uncharted collection

Yeah uncharted kinda gets me excited but when i see fallout i'm like well who cares and then i see all this wank over it and i don't get it.

'Shenmue 3' raked in over $6 million on Kickstarter

No one creates an immersive RPG world like Bethesda does lol. It's not like a normal RPG which is only popular due to hype.

Don't know if this was posted:

So Konami removed Kojima's name (yet to be confirmed if they removed his name in game as well) and closed Kojima productions.

Seriously, go to hell Konami. So many amazing games ruined by them, makes me wonder what they're gonna do with the PES franchise, since it seems like they're gonna leave the console gaming industry

M99[b] wrote:No one creates an immersive RPG world like Bethesda does lol. It's not like a normal RPG which is only popular due to hype.

Not so sure about that

If by immersion you mean bugs, glitches, terrible gameplay, and near identical voice acting for all the NPCs. Then yes, Bethesda makes the most immersive game worlds

Lord Spencer wrote:If by immersion you mean bugs, glitches, terrible gameplay, and near identical voice acting for all the NPCs. Then yes, Bethesda makes the most immersive game worlds

Speaking from my experience with Skyrim, yes Bethesda does make the most immersive world considering I spent hundreds of hours immersed on that game and so did a million of others and four years on are still being done so. Glitches and bugs are in a lot of games and yes console Skyrim has a lot but later patches fixed everything major. Those nearly identical NPCs you talking about, I know them better than I know my own neighbors. Sigurd who works for Belethor General Good Store, the Ysolda who wants to get rich by trading with Khajits, Nazeem who is the chief tourist guide of the Cloud District I could go on and on all day. They reused voice actors and that's supposed to take me out of my enjoyment and immersion. And shit gameplay I am not even gonna bother

I'll just say on the hundreds of hours I invested on it I did not find the gameplay shit and I can confirm that I was not brainwashed by hype and marketing.

On Fallout 3 I remember the world being very immersive. It's what kept me playing. I did not like the gameplay that much and that's probably because I was a scrub or did not really get it. I kept running out of bullets, dying, getting radiation.

Page 3 of 40
Permissions in this forum:
You cannot reply to topics in this forum
Latest topics
» 2022/2023 Premier League Discussion