the only reason i say that when i play is because there's nothing more frustrating than making a run for a pass and instead of someone making that easy pass they choose to dribble and end up losing the ball.

There are many times on clubs where i feel like i'm a ghost which is why i really don't like playing tbh.

I completely get that. And it would've been fine if I was allowed to do more things than just pressing X, which basically just makes me a static cog

I know what you mean by being a ghost, but I think that's mostly a result of Tom, Cheese and Sacci having such great chemistry that it's natural for them to play the ball between them. I may be wrong.

I messed up quite a few times because I simply didn't know what I was allowed to do when I received the ball. I remember receiving the ball in front of an almost open goal, and I somehow managed to lob it over the goal because I spent too much time thinking about what I was allowed to do, and what I wasn't allowed to do, instead of simply pressing O. Most frustrating moment was when no one wanted to be ANY, and I unwillingly accepted to do it, just to get things moving. I played like crap, and then everyone left. I just can't play FIFA properly when it's on those terms, nor do I enjoy playing like that. My best games on FIFA 15 clubs have been with glory hunting randoms.

So i'm not the only one who downloaded that then

If everybody yolo banters on clubs you lose every game without exception in higher divisions. And losing is not fun.
_________________

Can't wait. There will be yolo banter every match for the first few months

Think we should yolo banter up into we get to Division 3 and then start again.

Heard rg and thimmy are looking forward to clubs tonight.

You won't. We play differently to how we did before.

Me and thimmy ready. Anyone coming?

I should have saved Josh though but i messed up with his death totem. Also i got to Jess ontime but it clearly wasn't enough

I got spotted stealing some stuff, and sometimes when that happens some hired thugs will spawn and attack you later on. So I killed them and read the contract letter on one of their corpses.

"Here is the agreed upon amount. I expect you to faithfully carry out my request to teach a lesson to the thief 'My name here'. You need not kill him, but I have no qualms about it if you deem it necessary."


- Garmr (The person who sent the letter)


This is 'him' This is the guy who wrote a letter and put a bounty on my head. 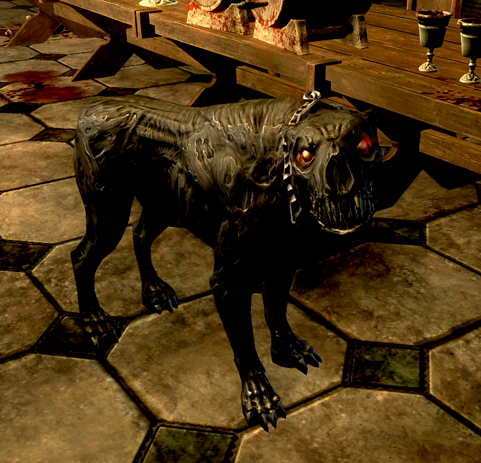 That's worse than Fallout's banter of some bloke telling me to find a cupcake in the sewers.

lmfao is that a legit thing or a glitch?

Glitch, it's just something that can happen anywhere in the game, a character who you happen to steal from or near from will hire thugs

Because I opened up a case at the vampire castle. So I go back in and just look at the dog and it looks back at me ffs

You can order it to follow you as a vampire, and it guards you. I'm taking it out to a nice quiet place later because the rest of the castle will jump me if I quickscope it here, and i'm killing it then bringing it back to life and killing it again rendering it 100% dead for the rest of the game.
_________________

If i know Bethesda RPGs it's most likely legit.

One time on Fallout, keep in mind Fallout is a post apocalypse world i killed some undead pig thing and looted him.....

LO and *bleep* behold he had a *bleep* cup cake on him.


Yeah RG this wasn't even a mission or anything it's nothing that has to or should ever happen. Absolute banter

Can other studios buy the rights of their franchises like MGS and Castlevania? As much as I love to troll PES it would be terrible if they stop making them.

Honestly from a business point of view you can't blame them. Their mobile games hardly cost anything to make and they get tremendous revenue, it is very profitable for them. Compare that to the fiasco of Kojima going over budget, taking too much time and Konami selling Ground Zeroes as a stand alone to get some revenue for 2014 and releasing Phantom Pain as an incomplete game.
_________________
#JUSTICE4

Yea Konami aren't interested in keeping the rights. Shouldn't be hard to get them. Kojima isn't rich enough to buy them though. But Sony japan or Bandai Namco can and should.

When they have signed the CL rights for next 4 years? seems legit.

PES isn't under any danger at all, i'm not just saying that either.

Page 21 of 40
Permissions in this forum:
You cannot reply to topics in this forum
Latest topics
» The Coronavirus Thread - Part 2