New Quest - Scavenger Hunt: Wolf School Gear
Locations: There are six maps in total to buy. They can be purchased from the following:

From there, it's a matter of finding all the diagrams. And yes, this gear is the best gear in the game.
Level Requirements: 14 for the first hunt. And you'll need to have reached Kaer Morhen at least once already.

So hard to level up in death march. You get less experience. Doubt i'll even reach 30 by the end

@Thimmy wrote:New Quest - Scavenger Hunt: Wolf School Gear
Locations: There are six maps in total to buy. They can be purchased from the following:

From there, it's a matter of finding all the diagrams. And yes, this gear is the best gear in the game.
Level Requirements: 14 for the first hunt. And you'll need to have reached Kaer Morhen at least once already.

Although the blacksmith in Kaer Muire was dead in my save

I guess you finished your first play-through then RG?

best game I've played since Dark Souls tbh, one of the best games of all time

I'm coming up to what I imagine is the end now, problem with big epic games like this is you feel like shit when ur done

@Firenze wrote:I guess you finished your first play-through then RG?

best game I've played since Dark Souls tbh, one of the best games of all time

It's easily one of the best I've played. Two back to back GOATs with bloodborne and Witcher 3.

Saw you back on ultimate team ffs

@Tomwin Lannister wrote:I'm coming up to what I imagine is the end now, problem with big epic games like this is you feel like shit when ur done

Yep. Always that feeling with anything GOAT

Hope Witcher 4 has him as well. I like Ciri but she has nothing on Geralt.

If you play a whole game as Ciri you will learn to like her like GOATralt IMO.

Nah. Doesn't have the presence of Geralt.

Won't mind a witcher game based on Letho though

Spoiler:
Lmao I thought Geralt was gonna die. My ending was so, so much better. Not sure how I pulled it off first time tbh.

Geralt survived. Somehow Ciri came back too. Cause I tried to smash everybody in sight I didn't retire in peace with either woman. When I run through again i'll change that but no matter how many times I play the game through again I will not let Geralt or Ciri die

Yea you got my ending minus geralt getting no one.

Same tbh. Won't pick any ending resulting in either of them dying. I do want Freeza's ending of Geralt and Ciri going away as witchers though. Not sure which options get that

Spoiler:
Yeah Ciri became a witcher on mine actually, but they split up and then Geralt went off alone after teaching her everything.


Gotta get Geralt laid ffs, Dandelion said Geralt just lived his days doing contracts and met him from time to time, ended up broke and wandering. Need to hook my main man up with a better future soon. and I think I want Ciri as empress instead. Keira and Lambert went away together on mine, Radovid the scrub was killed, and although I liked Dijkstras idea of fighting everybody he pissed me off in a few dialogue options so I killed him after the assassination quest. Tywin went away and sorted his own kingdom out.

Is it true in the worst ending Geralt offs himself? I'd have just put the pad down and walked away lmao

Geralt went to live with Triss on mine while Ciri became the queen. Tywin retired. Lambert and Keira went off. No idea about the others.

Yennefer was a controlling pos so I couldn't care less about her. Nobody got time to end up in middle of nowhere when she is in a bad mood imo.


I really got fond of Dijkstra tbh. Reminded me of Kingpin lmao. I wish he hadn't pulled that crap in the end and he had to be killed for the better of the realm.

Still pissed at Vesemir's death. It was cut scene's fault he died anyways. If i had full control it would have never happened IMO.


Yea the worst ending is Ciri dies and then Geralt dies as well trying to find the medellion Bog witch stole. He got depressed and basically commits suicide lol and let the monsters kill him

Spoiler:
That's just depressing, reminds me a lot of how if you messed up in Heavy Rain the main characters kids both died, some others died and he shot himself at his kids grave. Jesus Christ ffs

I agree with a lot of other people online though, they should have taken a different post endgame approach. World felt really empty when you completed it. All the main characters vanish and you're left with a shell of a world doing unimportant side quests that don't matter. So what i'm gonna do is a run thru on hardest difficulty, make all the choices that lead to what I want, then before the end stuff i'll do like everything on the map, and then hopefully DLCs roll out.

Agreed about the post-game

It would have been nice to see all the characters still there. I think they mentioned that the post-game world is basically before what happened during the Isle of Mist so therefore main quest etc is all disappeared.


I still have a lot of ? marks in Skellige but I have no motivation to do them since there is no point. Don't need money nor any armour or weapons. If I want to level up I know a good way.

That's why I started a new playthough on death march while making completely different choices. Still feels fresh and you understand the story a lot more.


@heavy rain. lmao can't remember what ending I had. But that twist was insane. Game was good just because of that

Just need some story adding DLCs to ease the pain, hate the aftermath blues of GOAT games/TV Shows etc, especially games where you decide what happens

Contracts were my favourite part at times. Hoping for at least 5 contracts in DLC

Would like a major contract, not set up by farm peasents, maybe a contract that has half of Novigrad chipping in that eventually leads to some GOAT boss monster

Till then gonna complete as many side quests as possible as I have *bleep* loads and then replay again for Moar endings. 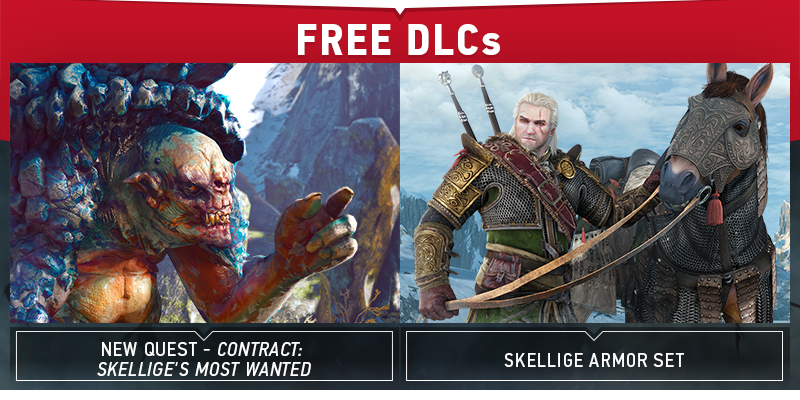 Also said those who didn't get last weeks will be included in this weeks.

If you want to kill urself watch this

I think i missed this guy the most out of everyone

Speak to the Mercenary Hans

» Houssem Aouar: The Mbappe talent in the midfield