A nice goal by Coutinho, but I don't get why QPR's quick goal was ruled out? Did it go out of bounds?

Henderson has been great. Still no idea how people don't rate him as a top player.

Sterling out honestly wouldn't bother me. I don't think he cares.

Sterling will never be WC if he doesn't even look like improving his finishing.

We won in the end, Well in Gerarrd.

Sterling and Lallana's misses were unreal. Lallana probably has the best movement in the midfield but still misses so many sitters.

Lambert has to start every game until the end of the season, He was very good. I dont get why Rodgers benched him. He has always been better than Balo and Borini.

Kinda wishing this had been Gerrard's last Anfield game, first missing a penalty and then dramatically coming up with the winning goal later

It was really nice to see him score, chances are it was his last Liverpool goal...

Anyway, it wasn't convincing, but got the points.

Look how Gerrard insures we get to safety, mops up his error while scrubs like Sterling and Lallana can't shoot straight when it matters.

What will we do without him. 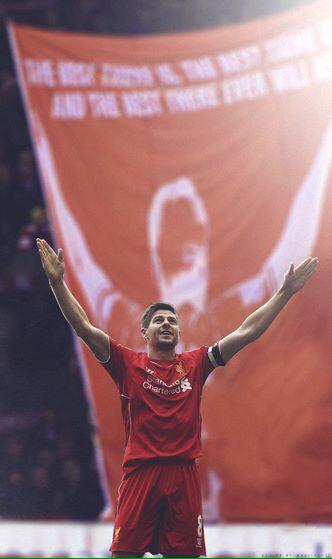 I'm so happy for Stevie.

Honestly I'm 100% behind selling Sterling at this point. I'm of the same opinion as Art and Mr-r, don't think he'll be anywhere near world class so if we can milk some money out of him then we should definitely do it.

Play the young card all you want with Sterling, and i'll give you some credit, but *bleep* me, his shooting has barley improved this season, his dribbling is still non existent, he will need these to even come close to being world class.

This seasons has felt his stagnated at best in his development and before you cram up my ass RA, yes i attribute some of it Rodgers.

We play so dull. Should start watching Barcelona instead, Brendan Rodgers seems to be a tactical genius getting Barca to potentially win the treble.

On Sterling: I'm still happy to have him, I've just lowered my expectations on him. If we get a £30m offer for him, I don't mind selling, but equally if he signs that £100k pw deal, I'm happy with that, too. It could be that he goes on to prove he actually is worth 100k pw in wages, that remains to be seen. It's just that if you asked me two years ago "Will Sterling ever be worth 100k in wages?" I would have said yes, I totally think so. Now I'm not sure, his development hasn't been what I expected. Still happy to have him, though. I merely hope that in a three years time we won't be wishing we sold him for big bucks in summer 2015 when he was still at the top of his hype if by then he's looking like another Shaun Wright Phillips.

Yeah lets just go ahead and dismantle the pieces that are working for the club at this moment.

Sterling is not for sale. He's one of the best players we got. Fittest player in the squad as well.

No matter how shit Sterling is playing in last few games, we will need him next season. I hate him for demanding that money and all but I equally love him when he plays good football. I have said it thousand times before and I will say it again, we need to keep him. It doesnt even matter if he doesnt reach WC level. Even if he is just below than that that should be fine with us. We just need a god damn striker and we are set

Today at 4:37 pm by RealGunner

Today at 4:10 pm by RealGunner

Today at 3:49 pm by BarrileteCosmico

Today at 1:55 pm by BarrileteCosmico