So i want to know what that is all about? 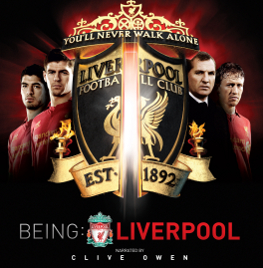 is it even a good idea to have a insight look into Liverpool with all the trouble they are having atm on field and maybe off the field?

it should be on the 16th i think

I don't really know what to think of this in terms of this being a good idea to expose the behind the scenes troubles and other stuff. But I know for sure, it'll be great for Liverpool fans to get a look at how our club is run from the inside and what our management's aspirations are really like.

As a supporter, I'm excited to see it. I'm very interested in seeing just how some of the behind the scenes works really happens. Given the recent turnover and changes at the club, I foresee this making for some very compelling television.

As for if it is a good idea... That's a bit more difficult. If there is a considerable amount of infighting and discontent between players/management, management/ownership, ownership/supporters, etc., then there could be damage to the club's image. That said, I don't expect to see that. I am honestly very curious to see the approach they take to the series, meaning that I'm not sure what level of the club they will focus on. To be honest, I think we're going to get something closer to a ground-level look at the inner workings of the club. I would be surprised if it delves deeply into the role of Ayre and the owners in the events of the summer. I expect to see more of Rodgers, training, and player's lives. That depth has the widest draw (all PL fans can appreciate it), has the least risk (in terms of upsetting the host club), and provides the most character development/connection between the audience and the players/coaches.

We'll really just have to wait and see.

It's going to be broadcasted all around the world in different languages. It's definitely for just PR reasons as the club itself is editing it; so nothing of negative footage will be shown.

The series will be set out into 6 different parts. It'll be great to watch for people that already support the club as we'll witness behind the scenes footage from the club and help understand what goes on off the pitch. It's most definitely trying to attract a new support base in the US and around the globe though.

Thanks for the link, mate.

thank you for that. huge pick me up watching it; this group of players truly is a blast to watch.

also, the scenes at fenway

cody ross's reaction is hilarious, bobby v could definitely learn a thing or two from brendan rodgers. also "when do you train???"

fantastic. super excited for the rest of this series.

NOOOO I missed it

It debuts Sunday (Sept 16) according to Fox's website. I guess the first episode was leaked.

meh that's not such a long wait. I thought they were going to film the whole season and air next summer. But it's nice, can't wait to watch it.

Thanks for the link. I have the Fox soccer channel so will still watch it in full HD on Sunday. The gf unfortunately doesn't, so she was excited to watch it. It wasn't as bad as I was expecting it to be.

For some reason, I can't seem to like Tom Werner. I don't know why. On the whole though, the squad seem to gel together rather well. And that makes me happy. Brendan seems to remind me of Rafa in some ways. He has got us playing some half decent football and the only way forward is for everyone to believe in his philosophy. Seems a great guy.

Most don't like Werner... I think it's because he comes across as the stereotypical American businessman: polished but superficial, and lacking in any real interest or love of the club beyond money. Seems to have shades of the H&G facade to him (fairly or not).

working link of first ep get in

working link of first ep get in

I'm going to wait and enjoy it when it airs later today.

As for Werner, and speaking from previous experience, he really does have that superficial, shallow businessman facade that H&G also wore. It's not at all uncommon with executives at prominent companies, as it is a good way to avoid alienating potential clients/employees, etc. However, the mere fact that it reminds supporters of H&G is what paints him in such a negative light.

Although it's airing in around 6 hours here anyways

Absolutely amazing. It so great to see everyone at the club be happy, whether it be the players or the cleaners. Rodgers has really won my heart over in his first 4/5 months. I wasn't really sure when we signed him but I'm convinced now that he's the right man for this job.

Cannot wait for episode 2. I hope they show more of Agger and his importance to the team as well.

Watched the first episode last night. It was pretty good I thought. A few awkward moments and a few moments of cheese (red sox part for one )

There were a few funny moments like Carra trying not to laugh at the Yoga instructor and JohnJoe's "meow".

The Flanagan touching from Brendan was a bit disturbing

The Parts with the South Americans were good especially the Lucas parts. Love that man.

I just read that the documentary will have their main focus on 5 of our players, Gerrard, Suarez, Lucas, Reina, and Agger

Yea, the Red Sox part was a bit cringe-worthy. Listening to the Sox manager alongside Rodgers just made me a bit embarrassed as a US citizen, as he came across in such a superficial fashion. That might just be me though (IJB will have a different opinion, I'm sure).

RedOranje wrote:Yea, the Red Sox part was a bit cringe-worthy. Listening to the Sox manager alongside Rodgers just made me a bit embarrassed as a US citizen, as he came across in such a superficial fashion. That might just be me though (IJB will have a different opinion, I'm sure).

Nope, not just you. Bobby Valentine just sucks. Bad media personality, always has been, to go with many other flaws.

Agreed Red, it wasn't just you. Bobby Valentine was just awfully cheesy, but to be fair to him there aren't many people as composed in front of cameras as BR. When you put two of them together in front of the camera, Valentine just looks like a mentally challenged individual who had escaped the asylum. I felt embarrassed as well

Watching it now since I didn't get a chance to on Sunday. Great show so far. Gerrard really does look like an ordinary fella at home. Glad to see Rodgers is the guy I figured him for. I really hope Liverpool keep the faith in him. His ideas and his philosophy are very unique.

Not sure if it's been posted, but for those that haven't seen the show it's free on iTunes until the end of the week.

This show is going to be great for LFC should the rest of the series go as well as the first episode. I hate the Pool as much as anybody, but I was totally enthralled with the show.

Page 1 of 3
Permissions in this forum:
You cannot reply to topics in this forum
Latest topics
» Champions League 2022/23 | Group C

Today at 4:24 pm by Robespierre

Today at 3:00 pm by Robespierre

Yesterday at 5:30 pm by Thimmy

Yesterday at 12:04 pm by titosantill