A Premiership club would've been nice, but at least Derby should be one of the better Championship clubs.

Are we expecting any more recruits? Or should i sleep on deadline day?

BR: There’s some players who know they’ll have very limited game time if they choose to stay past Monday’s transfer deadline.

I've a feeling it's going to be a quiet deadline day in the Premier League in general & not expecting us to do shopping any more.

I can definitely see some more outgoings for us. In terms of ins not expecting anything but would not be surprised if we signed a goalkeeper.

Good move him. Bring back Hughes with you 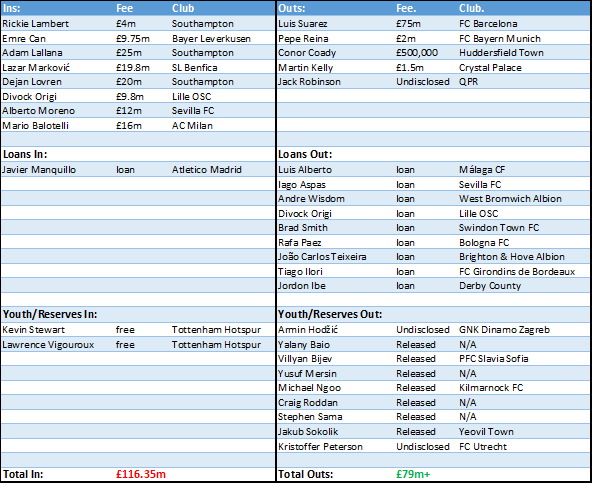 Judging from what BR has said in his last Pre Match interview it seems we might get one or two more IN and many OUT.

I don't see which positions we would need players in. Maybe a goalie but that's hardly a major thing. I also don't see what such players would be available that would really improve us at this stage. Very clear that the brightest stars, like Reus, for example, are not moving any longer at this point of the window.

I don't think we're buying anyone.

Can imagine Agger, Assaidi, Suso, Lucas, Borini and Coates leaving either permanently or on loan if they just accept offers. You sort of got the idea from Brendan's quote that some players have been turning down moves.

Yea BR made it clear if they won't leave they would be sitting on the bench.

And rumors of Coates to Sunderland on loan

Coates would start under Poyet. Would be good for him. He needs games. Plenty of talent and ability in there.

Nishy wrote:BR: There’s some players who know they’ll have very limited game time if they choose to stay past Monday’s transfer deadline.

A back-up goalkeeper is the one signing we appear to be still considering/pursuing.

Fahim89 wrote:Yea BR made it clear if they won't leave they would be sitting on the bench.

And rumors of Coates to Sunderland on loan

A loan to Sunderland for Coates would mean that they cannot sign Borini on loan, correct? So he'd either have to accept their offer for a permanent move or not rejoin Sunderland (can't see any other club offering £14m).

Yep RedO. But the permanent deal was off the table according to rumors. The lad seems very clueless right now. I guess he hopes to pull off a Hendo right now.

Rumors breaking now that Agger might move to Brondby for £3m. That would be suffering a loss on his current market price. But I guess we are granting him his wish most likely.

And also Dimarzio saying AC Milan want Suso. However no detail on the type of move.

I think Agger would have moved to a big or sizeable club by now if there were keen takers on him. I find the thought a bit sad that such a servant to our club and a very highly rated player on his day would just disappear to a small league like the Danish one. Might even prefer him sticking around rather than signing for Brondby. Don't think it's happening.

Fahim89 wrote:Yep RedO. But the permanent deal was off the table according to rumors. The lad seems very clueless right now. I guess he hopes to pull off a Hendo right now.

Poyet was commenting just a couple of days ago about still waiting on a final decision from Borini... if Sunderland have walked away from the deal it's only happened in this very week (and LFC haven't been informed, judging by Rodgers' own comments on Borini today).

Milan should have signed Borini instead of Torres. The later would sell more shirts while the former would score more goals. Coates to Sunderland would great for him and potentially for us too.

Borini will not outperform Torres come on now. Even in his current state Torres is still a very good player, and the only thing he's really lacking at this point is confidence. The move to Italy could well see him hit 15 - 20 goals again.

Would be cool to see Suso play on loan for AC Milan with Torres though.

Now if Agger is leaving and Coates is going out on loan! Would that mean we will only keep Kolo & Sakho as cover at CB? How does that improve depth in my view the most PROBLEMATIC position in our team

Can't beleive we made Agger reject Barcelona(12m and 15m) twice and City (20m) once only to sell him back to Brondby for a loss of 3m pounds. I hope its his choice and not by force, the man deserves better.

I think Stewert may get more games in the cup games.Read he can play anywhere across the back 4.So Lovren Sakho Skrtel Toure and Stewert will be enough depth think

He's gone. This has made me beyond sad.

Stewart looked like a headless chicken in pre season, But Utd looked amazing there too. xD

Wow, Agger has actually returned to Brondby. Talk about underwhelming. But I can only imagine this move has made him happy and felt right to him. Still, cannot help feeling that his career fizzled out quite regrettably.

Art Morte wrote:Wow, Agger has actually returned to Brondby. Talk about underwhelming. But I can only imagine this move has made him happy and felt right to him. Still, cannot help feeling that his career fizzled out quite regrettably.

Page 36 of 38
Permissions in this forum:
You cannot reply to topics in this forum
Latest topics
» Champions League 2022/23 | Group C