RA you'd be absolutely livid if you were a Man U supporter. They spent stupid money to add quality to the (very rare) spots on the pitch they don't need it. If our window was a 6, I can't fathom what theirs was when they're going into this season without quality anywhere in defense, DM or CM.

Red Alert is not a human being. I am convinced.

He must be the biggest troll of all time

He is unbelievable.....reminds me of George Costanza.

"GJ will force his way back in ahead of Manquillo/Flanagan (who is now injured" ROFL !!!!!!!!!

calls LVG one of the best managers in the world.....yet never ever gives any praise to Rodgers

RA you'd be absolutely livid if you were a Man U supporter. They spent stupid money to add quality to the (very rare) spots on the pitch they don't need it. If our window was a 6, I can't fathom what theirs was when they're going into this season without quality anywhere in defense, DM or CM.

Do we have that much quality in our defence and/or "DM"?

Their window went okay. Wasn't necessary great, but it was good I guess. They overspent on many players yes. But then again, so did we when we weren't in Europe. So were Juventus when they weren't in Europe. So did City when they weren't in Europe. You simply have to overpay at times to bring players into your team if you're not a European team. It's as simple as that. And at the end of the day they bought real genuine quality. Falcao, Di Maria, Blind, can't really remember who else there was out there, but those 3 are MASSIVE. Not many people rate Blind, but El Cujo and I will tell you that he is genuine. Great player. Probably their most underrated signing. Oh, there's Herrera too. He's not world class great, but he's a tidy player to have on your books too. Arq would have a better opinion on him though, I've only seen glimpses of him really.

Anywho, I don't rate their window too highly as like you said, they bought many players that weren't really needed. Their defence is a mess. I'm not saying it's not. But we showed last season you don't really need a defence to do well in the league. They don't have Europe to worry about this season. And they have better depth than we did last season too. Now before McAgger and Sepi come trying to put words in my mouth again, I have to state I'm not saying they're a guaranteed top 4 team, but they'll come at the very least close. If they can stay close to teams by the time they settle/click under LVG, they'll be a genuine threat to a top 4 team. They're also got that underdog status we had last season too.

Natalie Portman wrote:Red Alert is not a human being. I am convinced.

He must be the biggest troll of all time

He is unbelievable.....reminds me of George Costanza.

"GJ will force his way back in ahead of Manquillo/Flanagan (who is now injured" ROFL !!!!!!!!!

calls LVG one of the best managers in the world.....yet never ever gives any praise to Rodgers

You're a clown. You really are. I'm sick of talking to you. And I'm sick of you talking about me all the time. With all due respect, please stfu.

Why are you putting "GJ will force his way back in ahead of Manquillo/Flanagan (who is now injured" ROFL !!!!!!!!!" in quotation marks? I never said that. I said he'll walk into our team when he's fit. Because he will. Because he's still the best we have. Your manager essentially agrees.

LVG is one of the best managers in the world. Him moving to the scum won't change that. Look at the foundations he left at Ajax, Barcelona and Bayern. Look at his teams at Ajax and Barcelona. What was your opinion on him again when FSG approached him a couple seasons ago?

I don't give praise to ROdgers? Wtf are you on about. I've continously stated he's not a tactician. Because he's not. That does not mean I don't rate him as a manager ffs. Considering you actually called for his sacking, I'm still confused on why you're acting like your top shit. Or was that you in your "troll days"? :\ I don't know, you live in your own delusional world I can't determine when you're serious or not anymore.

I've always said Rodgers will become a SAF or a Wenger. He'll be great for us domestically. I've always said that. Again, stating this a second time, I said he won't do all that well in Europe against the elite because he's not that type of manager. I'm just sick and tired of you and McAgger continuously saying he's someone he's not. He's not a tactician. It's not a criticism ffs.

iftikhar wrote:What's price of Suarez!!! I have a lot of figures between 65-80 million (GBP).

RA, you are no different from other posters in terms of being extreme, like:
-GJ is WC (pls dont provide the BS that BR said it, BR plays mind games with players and we all know that)
-Rodgers is not a tactician.

I think it is somewhere in between, specially about Rodgers. You can say in some of the games, Rodgers has got us tactically wrong but sometimes he has also won over other managers by simple but damn effective tactical changes. Even fans of other teams will agree with that.

Do you really want me to go through your posts 2-3 years ago and state that they're still factual to this day?

FFS. I said he's still still the best we currently possess. If you honestly think Manquillo or Flanagan are better, then well, I really don't know what to say to you. Then again, you were hating on Skrtel when he wasn't even playing against Spurs, so who knows what to expect from you.

2. Rodgers isn't a "tactician" ffs. It's like saying Mourinho is an attacking minded coach because he put 6 past Everton. Again, I will not agree to him not being somebody he isn't.

but when you claim something like that, people are going to jump on you as soon as they get any chance

, so I will say if everytime you post long posts where we are in a merry go round of a circus, it doesnt prove anything which you havent already posted. So chill and dont take everything personally, that Sepi against you or something, you can sometimes not reply and give it up, but then again, I dont know if you reply to his posts purposefully.

Btw, i think I didnt hate on Skrtel, I think you meant some other posters.

Enough, you two. Return to the topic.

this whole life is a drama

Lovren is better than Skrtel, and I would prefer to have both Flanagan and Manquillo on the field over Johnson. I think most fans at this point who have actually watched Johnson play over the last year or so agree.

Would I still like someone more proven and talented? Yes, though Manquillo has been good so far so I think he's earned a shot at consistent playing time.

Summer's over in any case, let this thread slowly fade into history.

summer is over but our business is probably not yet over

our summer business is. 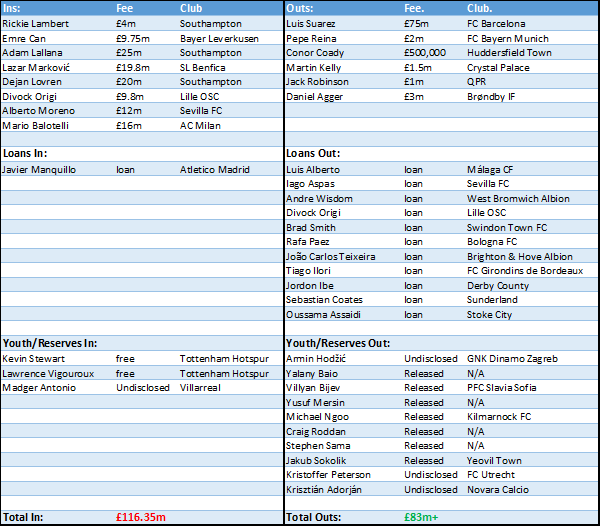 Shaqiri has told Sky Sports Germany that Liverpool had made an official offer for him before the WC that Bayern categorically rejected as we made clear we didn't want to sell him.

Seems as though he was either second choice after Lallana (that was around the time we'd temporarily broken off negotiations with Sotton) or first choice ahead of Markovic for the other attacking signing. Would be interesting to know which it was and see what role we wanted him for.

HEIL MEIN REDS wrote:I think Shaqiri will get eventually get sold and Bayern will try to replace him with some other player from BL like Reus

I think Bayern would have sold Shaqiri this summer if they didn't want him long-term. Ribery and Robben are both over 30, so there should be space for Shaqiri and another winger, e.g. Reus, in a couple of years' time.

Is Suso to Milan actually official?

Page 38 of 38
Permissions in this forum:
You cannot reply to topics in this forum
Latest topics
» 2022/2023 Premier League Discussion