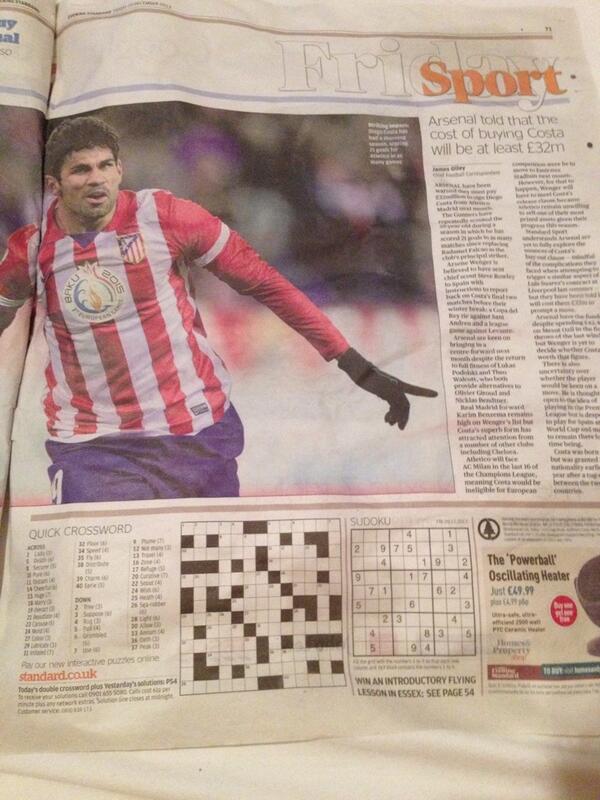 Arsenal won't be signing anybody in January. If we hear anything else it's all speculation.

I am not really ready for the transfer window drama, this is the best chance for Wenger to win the league. Its all up to him if he wants to win or not.

We need goal scorers right now, Wenger has to make up his mind right away no time for messing around. The EPL table is scary now, we could be 4th or ever lover in the next few days.

Its time to raid Dortmund, Reus and Lewandowski, the team is falling apart.

As with all transfer windows, a large helping of perspective is required. Yes, we could do with a striker who's on a higher level than Giroud, and getting one would certainly boost our chances a lot this season. However, we have to be realistic about this because that sort of player is not as readily available as you may think in the January window.

No top club will sell a prolific goalscorer at this point. On that five man shortlist drafted by Goal.com, Costa, Lewandowski and Llorente simply aren't realisitc either due to an unwillingness to move, joining another club or just starting out at their current club. Lavezzi isn't much a goalscorer and isn't even a striker. El Shaarawy may be possible but then he is young and has been injured a lot this season, so would come without much in the way of form which is hardly ideal for a winter signing, who would be expected to make an instant impact.

I also look at some of the strikers at clubs lower down the table and don't really see anyone who is currently better than Giroud.

Also, Wenger was quoted as saying that he works with Podolski a lot to train him as a center-forward. Perhaps in the next 10 days when we have 4 matches we'll see him through the middle a bit.

No to Ranocchia, young and brainfart potential, inconsistent for a CB and that's not a good thing.

Agree with Jay, lets see how Podolski works out as CF, if good then Lavezzi as permanent winger could do it. He would be expensive for a 29 years old, I wish Wenger would go for Sansone, no one know him yet but a tricky winger with habit to score goals

RG Must love this

we can get draxler easy IF, we overpay. maybe something like 35mill, will get him. schalke need the money, there team is not good enough atm. selling draxlar and improving the overall team will be better for them.

REWB wrote:we can get draxler easy IF, we overpay. maybe something like 35mill, will get him. schalke need the money, there team is not good enough atm. selling draxlar and improving the overall team will be better for them.

In the summer though, not jan i think

Dries Mertens has admitted that he has been given specific instructions by Rafa Benitez to attempt to lure his compatriot Thomas Vermaelen to Napoli.

Marca: Arsenal and Chelsea will go head-to-head in the race to sign Atlético Madrid striker Diego Costa in January.

I guess that's means we will be seeing Diego in London soon.

Atleti won't sell. In the summer, yes. But not before. They're still in CL and in contention for La Liga.

Also, Marca is about as reliable as the Daily Mail.

a video to light up this Thread

RG im scared of his Release clause though

We need him ffs