I also have to say I don't believe Great Leader's sale figures - I don't think they are slightly off, I think they are way off. Not saying you're making shit up but the source you've got your figures from must have been dodgy. No way Konami have ever sold 10 million PES copies in a year.

Anyway according to game sales vgchartz, PES 2013 has sold close to 1 million in Europe and North America while FIFA 13 sold more than 5 million in those regions. Obviously PES's main sale is in Japan where it has been outselling FIFA for decades and also in South America where I think they've sold around a million, but FIFA is growing in those markets too.

If you believe a well known poor source for sales figures to a publicly traded account then that's on you brah.

I just think you underestimate how massive PES is in South America and Asia.

My source isn't dodgy either lol.... my source is Konami's yearly reports lol.

Everyone knows PES struggles in Europe though.

Not like it matters anyway, they sell more than enough to make a new one every year and that really matters tbh.

Spend more than 10 mins in edit mode, you will soon get annoyed with them lol.

I turned them off in the end lolz.

I love the PES 2010 menu and soundtrack, never get bored of it.

No, I don't underestimate how popular PES is in South America or Asia. After all I'm from South America and I know half the people in Argentina have chipped consoles and get their games from pirate sources.

Playing against AI is the most boring and dreadful thing.

@FalcaoPunch wrote:Playing against AI is the most boring and dreadful thing.

lol u obviously haven't played against ai in pes.

fifa vs ai is awful. always the same I hate it.

@FalcaoPunch wrote:Playing against AI is the most boring and dreadful thing.

lol u obviously haven't played against ai in pes.

fifa vs ai is awful. always the same I hate it.

I have.
Same crap as fifa. Only difference is that it looks nicer on fifa.

Equally as bad though.

It really isn't.... its not perfect but i find playing the AI very rewarding and enjoyable.

Obviously not on the lower difficulties though, its one of the main reasons i play PES over Fifa i prefer to play AI or local on the same system against mates.

I can't stand playing single player on Fifa its boring, i don't feel that way on PES i find the single player very enjoyable never really had the urge to play online.

And too many players I've come against all try to use the exploits, so it takes all the fun out.

I've maybe only faced 4 or 5 quality players ever.
Even MT is a cheap fifa player

I used to love playing PES vs CPU but in PES 2011 there was a point where on higher difficulties you could see the CPU was blatantly cheating - Luca Toni outpacing Clichy and opposing team scoring as soon you scored one every time are my favourites. I haven't really played vs CPU since then so I don't know how 2013 has been in that regard.

Played around 20 matches on the PS3 Demo this weekend. You can see quite a few improvements from 2013 here and there, but if FIFA is anything close to encouraging you to neglect the midfield, this PES demo MAKES you forget about midfield and build up altogether. Release player, chipped through ball, rinse, repeat. Too easy.

I really, really hope I see some massive improvements in the new demo. Oh, and goalkeepers are still in an unacceptable state. For 3rd year running.
_________________

@danyjr wrote:Played around 20 matches on the PS3 Demo this weekend. You can see quite a few improvements from 2013 here and there, but if FIFA is anything close to encouraging you to neglect the midfield, this PES demo MAKES you forget about midfield and build up altogether. Release player, chipped through ball, rinse, repeat. Too easy.

I really, really hope I see some massive improvements in the new demo. Oh, and goalkeepers are still in an unacceptable state. For 3rd year running.

According to people who played the Gamescon build.... press, public etc etc the major improvements were.

Goalkeepers, input lag, more responsive and defensive awareness.( there was other stuff too but my mind forgets it) I'll guess we will find out on Wednesday in any case.

I agree with you btw, that build of that demo has quite a few issues even if the base game is very good IMO much better than 2013 in any case hopefully those improvements mentioned come to pass.

Also one last thing about the goalkeepers.... lets be real here have they EVER been good lol? even in PS2 era they were crap tbh.

Apparently also that edit mode details will all be revealed later this week.

About f*cking time honestly Konami could really learn a lot from EA when it comes to marketing their game.

Outside of edit mode as i know nothing about it....

League is mode is back.... Europa League has a stand along mode and not just available in Master League.

Also that TeamPlay thing is new, but i don't what the f*ck it is.

So yeah not a great deal new stuff as far as modes go, mainly just changes to ones we already have.

11 days till release and i know little to nothing about most of the modes i'll be playing, its like they don't want to sell the game.

EA haven't been any better to be honest regarding the improvements they make. They've been living on commercials, giving huge fancy names to tiny improvements (First Touch Control

) and shit like that the past couple of years without improving their game much. You look at FIFA 14 and it FIFA 12 reskinned, still the same gameplay and shallow Career mode.

PS: I wish Konami could improve the commentary at some point. It is so basic and ancient that it adds zero excitement to the overall gameplay. And it's got shitty commentators on both Spanish and English versions.
_________________

They have made improvements to modes that were already in the game but they are not exactly shouting it from the rooftops like you would expect...

Basically they have stuff but don't talk about it.... the PR is crap tbh.

Anyway... these are the teams for the demo on Wednesday. 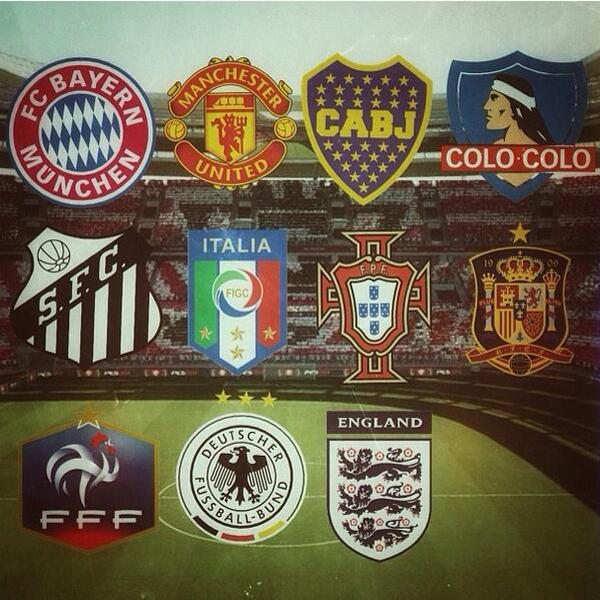 More than i expected tbh.... and there is this which SHOULD in theory make online better tbh assuming the connections are not utterly shit.

Basically what that means is that you filter out your search to play people who play on the same assistance you do.

I think Fifa does already have that but PES is so FARRRR behind in the online space its a good start, i have searched for 5 games on 2013( only played one) and every f*cker is always Madrid and Barca.

Hopefully i can be lower ranked teams without fearing these cheesy wankers.

Boca in the demo

fifa>>> even if i dont intend to buy either

Apparently FIFA demo's got Boca too

fifa>>> even if i dont intend to buy either

No one knows yet.... they said before there will be an 11 v 11 mode this year and maybe that's what TeamPlay is? as i said nobody knows yet.

Page 15 of 27
Permissions in this forum:
You cannot reply to topics in this forum
Latest topics
» The Coronavirus Thread - Part 3

Today at 1:38 am by LeVersacci

Yesterday at 9:32 pm by danyjr

Yesterday at 1:37 pm by BarrileteCosmico

Yesterday at 11:12 am by Nishankly