Brendan Rodgers has confirmed that Fabio Borini will miss the remainder of the season after the forward dislocated his shoulder in Liverpool's 5-0 win over Swansea on Sunday afternoon.

The Italian forward had only been on the pitch for eight minutes before colliding with Swans centre-back Kyle Bartley in a sliding challenge. The 21-year-old immediately let out a scream of pain as Bartley slid over his left arm, leaving Borini to trudge off down the tunnel at Anfield.

Rodgers told reporters after the game: "He will probably be out for the season, it looks like he’s dislocated his shoulder.

"It’s unfortunate because it’s the other shoulder, he had the same injury at Chelsea. It looks like, early stages, that that’s the diagnosis."

The incident was the only sour point in a dominant and impressive Reds victory over a weakened Michael Laudrup side, who have one eye on their Capital One Cup final next weekend.

Borini has been plagued by injuries since joining Liverpool from Roma in the summer and spent three months on the sidelines with a broken foot earlier in the campaign.

He made his return to first-team action at Old Trafford on January 6th but now looks set for a further spell in the treatment room.

A first half penalty from Steven Gerrard set the tone for the Reds, before Phillipe Coutinho marked his full Liverpool debut with a goal immediately after half-time.


Suffers a broken foot, has the unluckiest of goals stolen away from him and now with a dislocated shoulder (which had him screaming in pain) to end the season of one of our unluckiest of players.

I  cannot believe how disheartened I am about this as I wanted him to find success and win the hearts of the Anfield faithful. Knowing him with his excellent mentality and work-ethic, he will be back stronger than ever. I will him dearly this season.

Feel sorry for him. He's been truly unlucky this season.

Unlucky on him, but I'd be lying if I said I felt we are going to miss him this season. Hopefully he'll have a good pre-season and is "like a new signing" in August.

He looked so pleased to have come too and seemed like he was enjoying himself a minute before dislocating his shoulder. So sad, poor young lad, hopefully he can come back stronger next season.

How does a shoulder dislocation warrant being out for that long?

It's not 100% that he'll miss the whole season. It's just early diagnosis which looks pretty bad. They'll do more tests. It all depends on whether hes damaged muscles or ligaments around the joint. Not all shoulder dislocations are the same like they show in movies where they just pop it back in place

Messiah "Aggerswagger" wrote:It's not 100% that he'll miss the whole season. It's just early diagnosis which looks pretty bad. They'll do more tests. It all depends on whether hes damaged muscles or ligaments around the joint. Not all shoulder dislocations are the same like they show in movies where they just pop it back in place

Usually they'd mention the extra complications, though. I've dislocated both shoulders several times (it gets easier after the first one), and the vast majority of dislocations ARE straightforward like that. If there's a complication, I would assume we'd have heard of it.

Maybe that's where I'm offbase, though.

BORINI had a successful shoulder operation. (Like I said from the pain it didn't look like just the usual shoulder dislocation.)

So he's not necessarily out for the season. He'll be back in April. 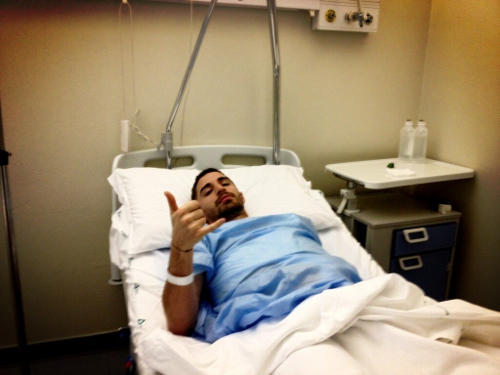 *bleep* hell. The injury looked bad but surely they didn't need to amputate his arm.

ALREADY BACK IN TRAINING 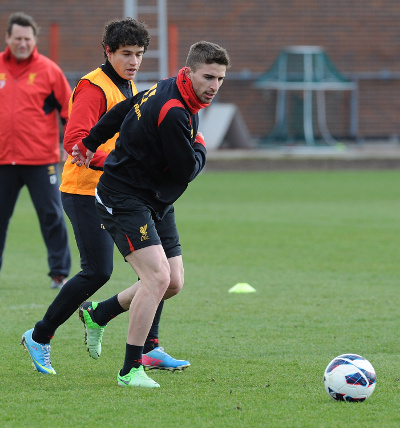 Nice, maybe we'll see him on the bench in May.

More Awesome News!! Kelly was out training with the lads as well

He's in the background

They're both on light training I believe. Don't think we'll rush either back - there's no need too. The seasons essentially over.*

*It may be over, but I'm really hoping we don't give up. We really ought to finish as strong as possible.

Everton lost today. If we beat Chelsea tomorrow, then the Merseyside derby could decide who gets 6th spot. Mind you we are way ahead of Everton on goal difference, so finishing on level points wouldn't be such a bad thing.

We might rush Borini back as Luis' season could be over.

Suso potentially off the bench. There's no need to rush Borini back. There's nothing to play for. We can't play in Europe. We can't get relgated. We can't win any trophies this season. Might as well just let him get back to full fitness and ready for a massive 2013/14 campagin.

Well his injury was just a dislocated shoulder. It wasn't anything from the waist down, so we won't really have to be worried about him re-injuring it. Especially since it was a freak injury that happens once in a thousand.

I'm almost 99% sure we'll see him feature somewhere in the next 4 matches.

There's no reason though.

Shoulder or not - he's had two injuries that have kept him out for a good 7-8 months. He's suffered more mentally than physically this season.

But to be totally honest, I don't see the need to rush him back.

I'd rather see the likes of Ibe or Morgan. They'll hardly get first team football next season and have exciting futures infront of them.

I have full faith that Borini will perform next season. I don't see the need to play him when our players will probably only turn up for one more game this season, Carraghers last game for the club.

There could be a million reasons to play him; form, suspension, red card to Sturridge. The biggest one we want to finish above Everton, and it's very possible as we still play them at home and they have to play Chelsea as well. If Sturridge was to get injured or have a shite game, then it would be nice to have Borini on the bench to replace him than a teenager.

I don't know. Maybe it's just me. I just don't see the need for him to play this season, is all.

I wouldn't want him to play if the injury was anything below the waist. Since it was just a dislocated shoulder, I really don't see why we couldn't play him.

Again, it's more mental than physical for me.

And again, it's only my opinion. lol

It's not like my opinion will see him bench anyway. :p