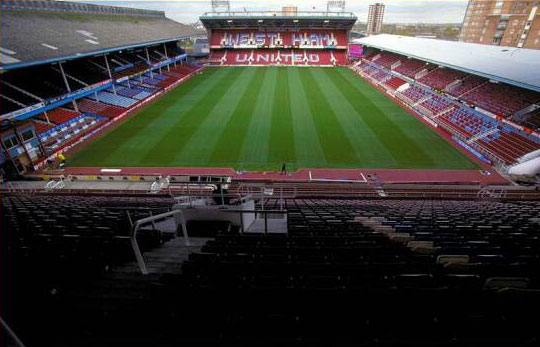 The Reds will aim to build upon their impressive form of recent weeks against the Hammers.

However, our last visit to Upton Park ended in a 3-1 defeat in February 2011.

LUIS SUAREZ IS BANNED.
Lucas is fit and should feature for 90mins.
Gerrard should start after being rested for the Udinese game.
Borini and Kelly are still months away.

West Ham
Andy Carroll is injured, But i guess he would be cup tied anyway.
Vaz Te and Diarra are injured.
Benayoun and McCartney will face late fitness tests.


West Ham will be in high confidence after the win against Chelsea.
Liverpool could start with Shelvey in the false 9 role.

Ill be missing this match, bad news is the last match i missed due to travel was the Arsenal game and we know how that turned out

3 points would be massive here to keep up pace with the table.

Hopefully we get the 3 points,
YNWA.

Upton Park has been somewhat of a fortress this season, the Hammers being 4 - 3 - 1 there. And without Suarez we need goals from other players, which has been a little difficult to get.

So it should be a tough game, but I don't fancy West Ham scoring many, either. Could be a one goal game, this.

I'd agree with Art. I'm not expecting this to be a goal-glut. It could be a very cagey affair, with us dominating the possession, but possibly conceding the only goal. West Ham certainly don't need a great deal of possession in order to swing a match in their favor. (Isn't that the hallmark of a Big Sam side?) We may just see a very slow, technical style tomorrow in an attempt to retain possession and compensate for our lack of a true striker. There's likely going to be a huge onus placed on Lucas, Agger and Skrtel to break up the counter-attack. 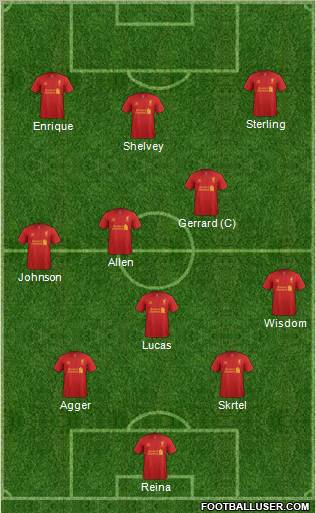 haha, dontreadonred-probably I saw this in one of the interview of BR but didnt realise it this way

So the west ham team which played against Chelsea was
GK (name is diffcult n long one which you know I guess)
Demel, Reid, Collins, Obrien
Noble, Tomkins (sub Diame)
Oniel, Nolan, Jarvis
Cole
Players to be bothered about are Diame and Nolan. The less number of ball Diame wins from our midfielders, more the probability of our domination and less chances of getting conceded. And off course, Nolan with five goals in this season till now. If we can keep quiet these two players, I am sure we can get at least draw and probably win also if someone from our team finds the net.
In this match, it will be very important that Allen and Lucas should play good.If we don't score till 60-70 min, I hope Cole/Suso/Assaidi (and not clowning) will be sub on.

they're going to bully us ala stoke city. we dont have too many physical players (can only think of skrtel...) should be an interesting game

Defense has been amazing since the past few games now. If we keep our concentration for first 15-20 mins and don't allow them to get confident on the ball, We could go on too win this considering the lack of attacking outlets we have going into this match.

Spurs match would have taught the team and BR a lesson. Dont see any major changes in the back four. Also im quite confident, We will come out of Upton Park with a clean sheet.

ynwa wrote:they're going to bully us ala stoke city. we dont have too many physical players (can only think of skrtel...) should be an interesting game

Don't forget about Agger. And I have never seen Enrique, Lucas, Gerrard, Johnson and Wisdom getting bullied physically as of yet.

Noooo Stevie you're supposed to do it on the other end.

this is beyond ridiculous. what a shocker - as soon as joe cole came in, we lost any semblance of control we had on the game. br with a terrible decision on that one, truly atrocious. cole has repeatedly lost possession and contributed nothing on either end, and our spell of dominance - and defensive control of their attacks - ended abruptly with his entry to the game. would've preferred anyone on that bench to come on instead. play jones as an outfield player ffs i don't care, this man is not good enough to sniff our bench. subbing him in ahead of sahin? making the bench ahead of assaidi? this is a joke.

Joe Cole is soooooooooo bad, it's not even funny to have him as the bud of the jokes but embarrassing. Enrique's injury hurt us. Tbh I never saw us winning this without Suarez. If we get anything from this game at the end I'll be surprised.

also, i'm beyond sick of every major call going against us. that penalty was asbolutely harsh - a volley from a yard away that hit him at the shoulder, in by the body? unbelievable. not to mention the fact that west ham could've seen 3 red cards by now and have one yellow to show fori t, or the penalties ignored against agger and who knows who else while they treat the penalty area like a melee. it's getting absurd and i'm sick of it.

Good start terrible finish, honestly bringing cole on was ridiculous. Not only will we suffer in attack but now we will suffer in defense, this is what happens when you decide that our backup option for LB is downing.

Agger should've had that penalty, you're right. It's a travesty that we haven't had a single call go our way this whole season in the penalty box. Any crappy thing that looks like a pk in our box is given while clear penalties are denied to us on the other end.

i hope we at least get a draw here

and we actually got it!!!! as I read ur comments about cole, i felt it's too harsh and he scored!!!

*bleep* YOU...HOW MANY *bleep* TIMES...THAT WAS A CLEAR PENALTY

I didn't think Cole was that bad, even before his goal. No one else was standing out either, if we are saying that Cole was having a shocker then the same should be said about a few other players, too, like Gerrard and Allen. And in the end Joe scored

But I don't get what's the situation with Assaidi. Has he got Rodgers angry or something? He should at least be making the bench and get some minutes already.

Anyway, a very fine result and the best way to end the week!

allen's was not a penalty at all

as usual I dont have to cry about our luck

Thank god we won, or I would be having another hissy fit over here with all the shite calls against us.

Diame was the difference for first 70 minutes!!! His energetic performance was problematic for us, for me Sterling won the match with a small but unintentional bash up with Diame

Our midefield certainly need to do better than that, I hope BR will take care of this, Allen has to quickly get settled in this position. He is not doing good enough.It is a good sign of progress that we won when we did not have so much luck!!!

Page 1 of 2
Permissions in this forum:
You cannot reply to topics in this forum
Latest topics
» 2022/2023 Premier League Discussion