Chelsea captain John Terry could be restored to the side after completing his four-match domestic ban.

Juan Mata and David Luiz are fit after missing the draw with Swansea last weekend, but Ashley Cole and Frank Lampard remain out.

Liverpool -
Liverpool's Glen Johnson returns from a hamstring injury to face his former club.
Pepe Reina's situation will be monitored in the next 24 hours, and will be assessed before the game if he is fit, Else Brad Jones will play.

Also i think Suarez if one yellow away from a ban, January 1st is the day when all the yellows get cancelled. If he gets banned then were fecked. [ check this one, not sure ] 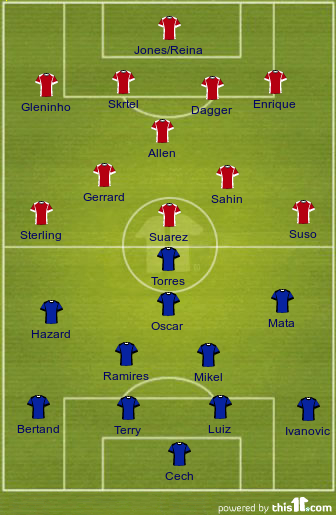 No idea about how Chelsea will line up or the formation, barely watched any of their games. Dont attack me on that if im wrong

This will be the fifth time the sides have met in the past 12 months. They met four times last season; Liverpool did the double over Chelsea in the league and beat them in the League Cup quarter-finals, but the Blues beat the Reds in the FA Cup final.
Chelsea and Liverpool have met 32 times in various competitions in the last eight seasons. Chelsea won 13 of those games, and Liverpool 12.
Liverpool are looking for a fifth consecutive Premier League victory over Chelsea. That would represent their longest winning sequence in this fixture for 38 years.

Obviously Chelsea are favorites, But Liverpool are called a big game team. But sadly we haven't won any of the "big" games we have played this season, Losing to Arsenal, United and drawing with City, Though we were the better team in most of those games.
Allen will obviously find it hard to contain the " Mazadcar" or whatever its called, Something that our beloved, Easily the Best DM in the league, Lucas Leiva does so easily.

Expecting a nervous 90 mins, with Suarez missing 4 easy chances and hitting the post twice. Hopefully we win regardless of how this United in the league table. But even of we lose won't matter much to me, The season is a building process, Dont mind if we finish in the bottom half this season as well.

-Suarez IS on 4 yellow cards, yes.
-Lucas isn't on the long term injury list anymore. I think he comes back in less than a month.
__

I say go all out attack. We can definitely exploit Chelsea's midfield as Hazard, Mata and Oscar are predominately more attacking and don't track back as much as they should. They've also had a massive game against Shaktar mid-week and we've rested key players in the squad meaning we have the extra legs - we just need to turn up.

Agger and Skrtel have a massive challenge infront of them.

Suso and Johnson are going to dominate the right hand side, I can see it now. Bertrand imo, is a very good young player but hasn't done much against the "bigger" sides. Hazard, again, doesn't track back. It means a lot of work for either Mikel and Ramires, and they're going to find it tough going against Gerrard, Allen and Sahin.

Really hoping we can take our chances. A win here would be a massive boost for the squad. We've definitely lost some points against Everton and Newcastle ( Sterling and Shelvey really should of took their chances near the end

) and are 2 games behind the four.

We're known to step up against the big sides but haven't done too well this season. Losses against Arsenal (we didn't turn up) and United (robbed) with a draw against City havn't been too good. Hopefully we change that against Chelsea at the bridge. We do have a great record there in recent years.

You got thte venue pic wrong, Nishy, it's not at Anfield

I think we'll lose, but can't wait for the match.

Man it'll be heart wrenching to watch every tackle, every dive, every argument Suarez does in the next 10 games because we simply can't afford to lose him.

As for this game, I'm as always optimistic and I think we will win. Great to have Glen back, he adds a very much needed attacking threat to our game which we've missed in the last 3 games. I hope this injury break has given Reina plenty of time to ponder about his game and comes back his old self. I'm hoping he starts.

I hope, too, that Reina starts, if not for anything else than the fact that Jones isn't really good enough to be our long-term first-choice keeper.

I'll personally do the same team as Nishy in the opening post with Reina in goal. We need Sterling to stay wide. He potentially would open the space up for the likes of Sahin and Gerrard running forward supporting Suarez and leave Enrique back.

does it imply that he wont be starting?

I know Lucas is about 20 days away, But it seems so far so i mentioned him in long term

If Suarez gets a yellow, How many matches does he miss?

I say, we can surely win this game.
Chelsea were never open before as they are now, while mata, hazard and oscar are playing. I am sure will be able to create lot of chances and it will depend upon how many we will be able to put at the back of the net out of those chances.
I hope JT doesn't start and instead of Luiz starts. Suarez will be nightmare for Luiz, actually for any center back. But if Luiz plays, I am expecting he will make some crucial errors.

Also Cole will not be playing, so Bertrand will have to handle sterling and Glenn combination.
Another player we should be aware all the time is Cahill. He has been brilliant this season defensively and making those sudden forward runs. He has scored 2 goals this season.
As I have seen few matches, Chelsea have scored many of their goals from set pieces, corners and defensive errors; as Torres up front is not helping them so much. So, if we are able to handle those nervy moments and handle set pieces, corners. We can restrict them and so I am confident that we will win this one

So he will earn 1 matchsuspension in case he gets a yellow.

Just food for thought. Remember, we have used a 3/5 man defense against Chelsea, and with success, in the past.

Skrtel will miss the game due to a virus apparently. The rumoured team I have seen is

Would love to see Assaidi get a run out against Bertrand instead of Suso, I really think we could see him have a breakout game and I want to see him bedding in with the PL starting 11. I honestly think he's our best bet as a starter, and it's November already; time to start seeing our summer signings playing the big games (obviously Allen aside).

That being said, I'm very nervous about this game. I don't see us winning in a shootout, and I think that's what will happen in this game - high scoring on both sides, but I see Chelsea's attack both being more productive against our defense than we are against theirs and (obviously) more clinical than our attack, which is not a good combination. I also feel that this is a must-win game for morale purposes; we've been dropping stupid points, and our good runs of form seem to come to a crashing halt whenever we face a good team. If we can win this one and put together a real string of good games, it'll mean wonders for our players, instead of the stop-and-start season we've had so far.

Oh god if Carra starts, we might be in for a long game. I mean I know Coates had a difficult match against Anzhi but he's still comfortably our third best CB.

Messiah "Aggerswagger" wrote:Oh god if Carra starts, we might be in for a long game. I mean I know Coates had a difficult match against Anzhi but he's still comfortably our third best CB.

is there any reason to think skrtel-agger won't be the cb pairing?

There are rumors that Skrtel has a virus and might miss the game.

Schweini wrote:Skrtel will miss the game due to a virus apparently. The rumoured team I have seen is

I surely like this idea, Let Johnson and Enrique run forward and sometimes Wisdom also. But I would like Suso to play central instead of Sahin and suso has that killer instinct for through passes, splitting the defense.
In case Sahin plays, let Gerrard play up front combining with front two guys.
btw, What an amazing spirit, guys !!!

I am sure this match will be fracking entertaining

Man we're horrible attacking wise. Didn't create anything up front to get the game going. Even defensively the lack of communication was evident in almost every Chelsea attack. They've been ripping us open time and again on the counter.

Suarez saves our asses again. What else is new?? Rodgers got his tactics wrong for the first half, should've just gone with our usual 4-3-3/4-2-3-1.

Jones is new kop hero, dat save on Torres

Flop of the match was Allen by far.

Im happy with the point. Suarez should have scored that 1v1 against Cech.

Also im losing patience with Allen as our last line of midfield before the defense, Cant wait to see Lucas back.

Jones is new kop hero, dat save on Torres

Flop of the match was Allen by far.

Agreed.
Enrique was Man of the Match, he was doing everything on that left flank. Sure misplaced a few passes but you're bound to if you're as much involved as he was today. Great performance.

Sterling and Suarez took silver and bronze in that competition, imo. Gerrard deserves a mention for his hard work both ways.

And Allen was the flop, gave away possession dangerously time and again while offering very little to our midfield game. I, for one, am hoping that Lucas is the player he was pre-injury and is able to take over that CDM role.

A little frustrating game where Chelsea had the more dangerous chances while we had barely any chances, but it's a fine result at the end of the day. Rodgers needs more ideas in attack, at the moment it's too much "let's do well in midfield and hope that somehow turns into goals."