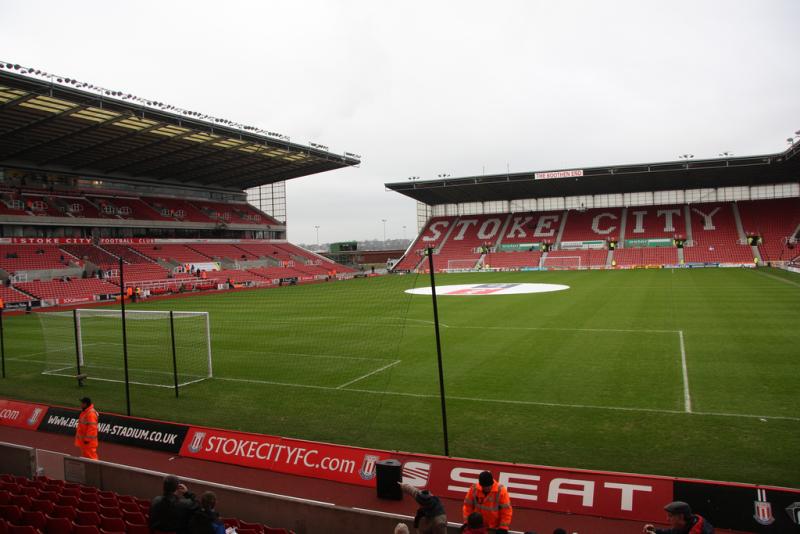 Liverpool are in Boxing Day action against Stoke City.

The Reds' last visit to the Britannia ended in a 2-1 win in last season's Carling Cup tie thanks to a Luis Suarez brace.

However, Stoke prevailed in the corresponding league fixture 1-0.

Team news-
Liverpool-
Borini is out with an ankle injury, But he is less than a month away from his return.
Sterling and Allen are set to rejoin the squad after being rested for the game against Fulham.
[http://www.liverpoolfc.com/news/latest-news/melwood-injury-latest-2]

Stoke-
Mark Wilson and Rory Delap are injured.
Stoke striker Michael Owen is close to fitness and could make his first appearance since hurting his hamstring in October.
Another ex-Liverpool forward, Peter Crouch, will hope to win a recall to the starting line-up.

They have not lost a top-flight game on home turf since February, and have conceded only three league goals there all season.

Saturday's draw at Tottenham extended their unbeaten streak to eight games, their best ever run in the Premier League, and saw goalkeeper Asmir Begovic keep his ninth clean sheet, a division high this term.

The Potters have kept clean sheets in four of the previous five league meetings, although the Anfield club did eliminate them from both cup competitions last season.

Imo this game will be decided by the team who gets the first goal. If we get the first we'll go on to win it by a decent margin, But if Stoke get the goal, Get ready for a frustrating evening. Also Stoke are unbeaten at home in the league uptill now.

Also 4 teams challenging for 4th are 5 points above us, So a win is crucial if we want to stay close to the pack.

I want BR to stick with the team that played midweek. Confidence is important in this game.

Hopefully we can get the 3 points,
YNWA

They have conceded 3 goals at home in 9 games.

lets check their offensive stats and see where they rank

We really need to find a cutting edge here, it has to be understood that draw is their default aim,ensuring we win might be difficult but not impossible...honestly i dont have a clue which team to put on the field as their physicality surpassed ours but i do hope the coach do the right thing to bring three point to anfield,that way i could heartily look forward to a memorable new year.

Stoke is a crazy team they lost only 3 games this season in EPL, against Norwich, ManU and Chelsea (off course all away). They were also leading at Old trafford by 0-1 but then lost 4-2.

Whatever, but a win is must here.

The good thing is Boxing day performances for Liverpool in past few matches are far better than stoke.

And me too want Hendo to start, his discipline and energy will help us a lot.

Downing should also start, i am sure Downing will put a good performance. I just hope BR doesnt start shelvey or suso in that wide position. Downing starting will also mean, we will be little better defensively .
I hope we play quick and guile passsing so that stoke defence should be clueless. Also we can start the match with such a high tempo and try to get a goal in first 30 min or so, it will surely help.

It really is amazing how few goals Stoke have been conceding this season. Just three at home. Although you'd like to think we've got more quality all over the pitch, I still might take a draw if it was offered right now, such has been Stoke's form.

A win here would be our best result so far this season.

I eagerly await the day when I see Stoke City relegated from PL. Hate them as much as Wigan from the irrelevant clubs.

Have a feeling we'll beat them.

They are defensively solid and we'll struggle physically against them in the middle of the pitch if we play the likes of Allen and Sahin.

Game in less than 2 hours. Most of our rivals won, it would be a shame if we dropped points here.

Agger as a LB

I'm glad Allen is not starting this one. We need grit for this game and either Shelvey or Hedo can provide it. It's very surprising to see Rodgers has opted with Suso but I'm glad.

So its the same team?
Cool.

Good line-up, let's see if that shows in the result... Kightly worries me, lol.

in the tunnel, gerrard looked in deep thoughts

gerrard i love u, i love u

Stoke is shite.
I hate this team more than United.

Nishank wrote:
I hate this team more than United.

Why? They are a mid-size club doing their thing, I like them.

But I can't believe we conceded that first goal, Sunday league defending from both Skrtel and Agger. The second goal and Agger just let Jones drift away and have a free header. In attack we're standing around too much.

shelvey going hot n cold in the match...except that one run behind their defence, where also he had poor touch, I will say play suso in midfield n probably bring sterling. He has that vision to pick the right player from the midfield

Stoke deserved this win. We were shite, we can't blame anyone else but ourselves. Just grinds my gears how teams like Stoke and Villa raise their game against us and get raped by Chelseas and Yaniteds.

At least we won't be playing this rugby team again this season (unless we get them in FA Cup), so that's a positive.

Nishank wrote:
I hate this team more than United.

Why? They are a mid-size club doing their thing, I like them.

But I can't believe we conceded that first goal, Sunday league defending from both Skrtel and Agger. The second goal and Agger just let Jones drift away and have a free header. In attack we're standing around too much.

Agger wasn't at fault for the first goal. He won his header against a much taller dude, it was Skrtel who slipped like a condom on a tiny wiener and also Johnson who didn't rotate into Skrtels position.

What was the point of bringing Cole in ffs

bring in one of Coates or Carra at CB and send Agger forward. Agger is brilliant attacker, everytime he's up there we seem to create something. Especially against a team like Stoke. Really Rodgers has no clue how to change his tactics when his tiki-taka shite doesn't work.

shelvey doesnt deserve 60mins of this match..oh my! joe cole when all is not going well?the very biggest mistake was trying to match their tempo, we should have played a slow game to piss them off.

Its not BR's fault, This is arguably the strongest possible line up from the current squad that we have. The same team won 4-0 three days ago.
His substitutes were actually the best this squad has to offer assuming Assaidi is being ostracized.

Shelvey was just horrible, Suso was decent with whatever amount of ball he had, Stoke defenders never failed to bully him every time he received the ball.
Glen had an on off game, Usual Glen neglecting his defensive duties and suffering from brain freezes in attack. Enrique was the MOM.

Skrtel and Agger, I have noticed always struggle when there is a huge target man up front, Noticed with Benteke, Jones, Cole. Anyways, Unlucky with the goals.

Second goal was man marking, Agger got it wrong, Meh.

Suarez was good, Was the only guy who showed some interest in getting LFC forward. Gerrard was not himself today, Misplaced passes like mad in the first half, Took his goal well, Touch wood.

Stoke is has always been a difficult place to play in, But i expected a better performance. Anyways onto the next game and its QPR away on the 30th, Another shady fixture.

Also i remember the days when Stoke or some scrub team winning against us (usually 1-0) was termed an upset, But now we are being outplayed and massacred with scorelines reaching to 3-1.

4th is 8 points away i guess, And im pretty sure that it'll be much closer in a stage further this season, But let's face it. We (don't deserve it)/(are not good enough).


On a side note, Just something to notice, 19 games 25 points.
#SaveusSturridge.

Page 1 of 2
Permissions in this forum:
You cannot reply to topics in this forum
Latest topics
» The Gospel of Gabriel Jesus according to Pep

Today at 2:45 am by Robespierre