yeah it was a great performance from Tello, but its vs a 3rd division team.. he;s used to play against tougher opponents in Segunda every week.. so lets not get over excited

Last week, at the Camp Nou, Pep Guardiola presented a line-up that featured 10 La Masia-schooled players to start the match against CE L’Hospitalet, with the lone exception of Pinto, the goalkeeper, who had never been at club’s lower divisions. It finished with 13 at the final whistle. The coach’s obvious confidence in youth players manifested itself with every game and under his watch 22 players in all have made their debut with the first team. One of the latest to have left his mark in the match is Cristian Tello.

Perhaps it was due to his aversion with playing a double pivot in the middle or a lone striker, but there are very few coaches who have such a good eye for looking at the finer points of a player as Guardiola. He was right about Pedro and was spot on once again with Isaac Cuenca. And now he is showcasing faith in the promising young Gerard Deulofeu and Cristian Tello.

Tello is a nimble, two-footed striker in the mould of the traditional forward that we are used to seeing. He has pace and cunningness – street footballer qualities, and add to that is his eye for goal. He scored two that night, one with each foot. Although he could have crossed the balls, he chose not to. Without pausing, he feigned his move and the finishes were good.

Born 20 years ago in Sabadell, Tello has earned widespread recognition not with someone promoting his name in the press but with effort and talent. Starting out at 11 with CF Can Rull, he caught the eye of Barcelona’s scouts. The club signed him and placed him in Barca Alevin where he became the top scorer in the division (2003). After that his progression seemed to have slowed down a bit. In his Juvenil years he was loaned out to CF Damm for a season, before joining Espanyol B team when his contract expires. When they were relegated to Segunda B, he made a move back to Barcelona where he earned Luis Enrique’s trusts that saw him getting more minutes (23 matches and 4 goals) than Cuenca.

With Eusebio, Enrique’s replacement at Barca B, he is progressing nicely (13 matches and 4 goals), although his season is blighted by an injury. “He has all the qualities to succeed,” argued the coach. “Not many players are as prolific as him and yet good at playing with others in the build-up. And on Thursday I saw that he also knows how to make good decisions.”

Tello, in response, just said that it was down to Pep: “Guardiola told me to simply do what I could and forget about everything else.”

Guardiola took him in the 2010 pre-season tour but an injury stymied his progression. Now however, he seems to have regained lost ground and has renewed his contract until 2013. He is transforming himself from being an endangered species into one of the protected species in the club.

Reminds me of Pedro.... I mean Pedrito when he first came up. 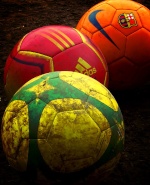 How tall is he?

Looked exciting in the game, very classy, pace, finishing was top class, another exciting prospect for us

Guy has got some serious pace to burn.
I think he can be very useful in some games against parked buses.
Goes without saying,he should play all Copa games along with Cuenca.
No need to risk Sanchez,Pedro and Messi.
But Messi will probably play every Copa game.

Too old isnt he?

born on '91 if i remember correctly.
still not a grandpa