Puyol has been nothing short of a crap for Barca this season.

will be massive prblem for spain if he start.

Or swap Pique with Puyol, Alonso with Busquets, and Llorente with Soldado.

There's no need for Alonso to play imo.

Though not even I would put Valdes.

Big news from Spain squad for Venezuela friendly. Torres and Albiol are out, Soldado & Muniain are in. 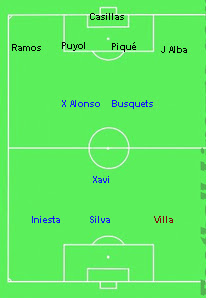 Say Xavi was out how would you guys line up? He's had a couple injury problems this year.He's also en route to play another 55-60 game season.Injuries to someone like him scare me alot because of the sheer amount of games he's played in the last 4 years.

Guesses as to what Spain's Euro squad will be?

For me, there are a number of positions yet to be decided.

For me the biggest issue is up front. If Villa is fit, you would expect him, Llorente and Soldado would go and VDB to choose 2 wingers to add a bit of pace to a side which lacks width. I think Navas should definitely go, so it depends on whether VDB prefers the experienced but out of form Pedro, or Muniain. I think it depends hugely on Pedro's form in the final games of the season.

Here's the probable squad for me:

I expect there to be a bit of mixing in the starting XI. Doubt Villa would start all games if he makes it. First choice XI of mine though:


Not going to play this formation obviously, just shows where I consider their positions. As in, Martinez as 4th defender. Could play in midfield obviously, I would sub him in for one of Alonso or Busquts (because both will start) to add better balance.

VDB likes Busquets and Xabi too much to bench one of them.I think he will keep the team's back bone

i think Villa will be available,i really dont know who will start as the "?".one of pedro,silva or even cesc.He could also use Villa as a winger and put Soldado/Llorente as a CF.I think Soldado is def higher on the pecking order though after his 45min hattrick vs Venezuela

This is my predicted selection.

Torres is certainly in better form than Soldado, Pedro and Villa, he's definitely going, and is likely to play a big part in the tournament. The one who shouldn't be going is Villa his form pre injury was nothing to write home about, and I don't see it improving after 5 or so months without kicking the ball.

EDIT: didn't do this section existed, haven't been around a lot lately.

why exactly should torres go lol.. soldado and llorente have been more consistent over the course of the season .. just because every one of their goals is not hyped to kingdom come, doesnt mean torres should replace them

If this was a normal team, going out and looking for their first title, there would be no question - of course Soldado would go.

But Torres has consistently came up big in important moments for us, he's a national hero, and the squad loves him.When tensions were high after the classicos he was one of the glue guys who held us together.

People don't understand that even though everything should theoretically be limited to on pitch performance over the course of a season, in this case it isn't.

Anyway i always hoped he would travel, he's actually improved as a player in the sense that he is more complete now, not that it particularly matters but whatever...

Spain have a lot of midfield talent, but can any of them actually replace xavi successfully? because he is starting to look past his best to me

Replace Xavi as a functional element in the system?- No not right now.

But can someone step in for Xavi and go about the role a different way...yes there are many many options.

Hmm, one things for sure i will find it very interesting to see how spain do when xavi's reign does end. We will see just how important he has been for spain, same for barca as well - presuming the other key players are still there

I think we will do really well.

The next generation is even more talented than the last.

What will be more interesting is to see how we play because alot depends on who adopts the role of tempo setter after Xavi is gone.

But Torres has consistently came up big in important moments for us, he's a national hero, and the squad loves him.When tensions were high after the classicos he was one of the glue guys who held us together.

People don't understand that even though everything should theoretically be limited to on pitch performance over the course of a season, in this case it isn't.

consistently came up big? the guy scored precisely one, ONE important goal in his entire goddamn nt career

i'm sure the likes of ramos appreciate his hairdressing abilities but seriously... torres was an utter joke for a year and a half, now he's apparently the dog's bollocks because he's scored
1) a goal that didn't even matter when the closest defender was 20 metres away
2) a hattrick against a relegation battler

He will be lucky to be included as a reserve player.

The 23 players I think VdB will pick:

I think Torres with his recent performances will get in ahead of Soldado, Pedro started scoring and del Bosque will pick him.

Vicente likes continuity and he will pick guys who played at WC. If Albiol plays more often in upcoming matches he may as well be back into contention. Players at the bubble from this list are Iraola, Torres, Villa, Navas, Pedro, the rest will go 100%, no doubt IMO. Villa would be lock if he returned now to the squad, but his rehabilitation progress slowly.

So IMO 18 players who will for sure go to Euros, unless they get longterm injury in one of upcoming games:

5 places up for grabs.

Page 2 of 36
Permissions in this forum:
You cannot reply to topics in this forum
Latest topics
» Most controversial World Cup Golden Ball's since 1966