Why don't we have a thread for this BALLER?

I thought he played a fantastic second leg versus Real Madrid after quite a disappointing first leg. He was even more impressive against Tottenham in the round prior. 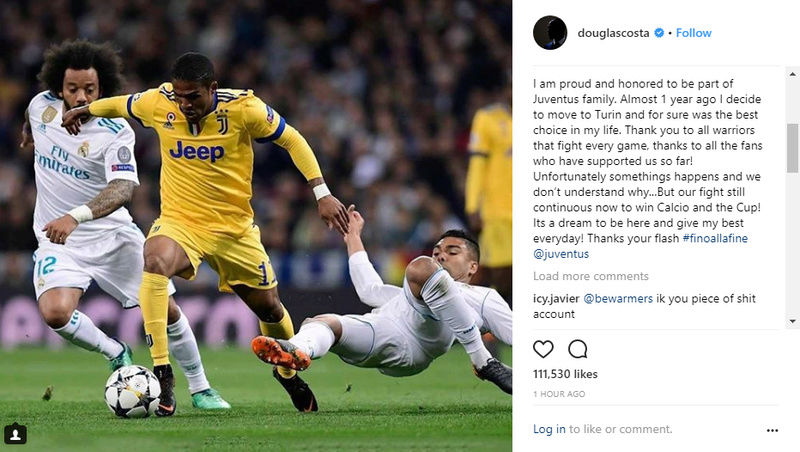 when Juventus was after Costa that sounded strange to me

because we already had wingers and it did not really make sense to bring another winger from the 3-5-2 way of thinking and it sounded like there will be an Alex Sandro sacrifice but did not happen, and I thought something went wrong with the plan but I don't think that was the plan after all, I guess I was wrong about that,

Costa idea was simple idea, so we could have another option so we could keep rotating players and keep it fresh, I mean Juventus love rotations, a specially guys like Giacherini,

I think Costa is a really good player, if you think about it , you would not be comfortable to play against this guy, he is a good player, he is worth the money we paid, however, I just don't think he was one of our best transfers, because he still did not do too much for Juventus

I mean come on ? he has to score goals, assists, better statistics,

Explosive game last night. Made some poor decisions in the second half but overall , one of our best players last night. Undisputed starter at Juve now, no doubt in that.

Costa has been very good for us. Brings a lot of things we need. Fastest player we've had in many years.

Last night he wasn't great. Constantly made the wrong decisions. It was the kind of performances that gave Cuadrado a bad rep when he first joined us. If he had been smarter he could have had a huge impact on the game. Always beat his man, escaped Marcelo, exploded going forward, and then screwed up.

His Spurs games were the real deal. That's when he was one of our top players.

Anyway, great player to have!

Yes his decision making let's him down sometimes.But if he didn't have that weakness he wouldn't be playing for us cuz other than that he's amazing.
He is a improved version of Cuadrado imo without the Cuad's defensive workrate.

That said I wonder how fap worthy playing Costa and Berna on the wings and converting Cuadrado to a wingback would be.

I still rate Cuadrado ahead of him but that's just a matter of opinion. I don't think its clear cut either way. I see Costa as Cuadrado when he first arrived: awesome plays with wrong decisions. Cuadrado improved so much and puts in top levels of work rate he didn't used to at first. Cuads has gotten more impactful and better defensively. I think Costa can follow suit.

He wasnt that great ? Common, i think you're a bit harsh on him. He had a big involvement in 2 of those 3 goals. I agree he made some poor decisions during the course of the game but  he was also one of the big reasons for that explosive start in the first 20 mins.

He's better at running at defenders with the ball than Cuadrado. We have no one in the team who can do that as good as him. So he's an invaluable addition in that respect. I also agree that he's an improved version of Cuadrado. If he improves his decision making, he'd be an elite player no doubt.

He wasn't, he was just good. He played a great 20 minutes and then kept overdoing it. Too many times when we were on the front foot he chose poorly and in a game like this that kills you.

He took the ball on right side close to the halfway line, made an awesome run, failed to play anyone, continued to run to the side and an ended up on the opposite corner. From the right side of the half line, to the left corner, ran into a defender and lost the ball. Giving Madrid a chance to counter.

Its the most unnecessary thing in the world.

It looks better for him because he runs and dribbles impressively but the end product was disappointing.

We can say he was great as in all of our players were great last night, they were on top of everything. Among our players though, he wasn't top 3. He was outperformed by the calmer heads in the squad. I'm sure he will keep improving and come through next season as well.

Its great to have different options. Him and Cuadrado give us something different from Dybala/Bernardeschi or Higuain/Mandzukic.

I wanna see Costa on the left more. We've been benefiting the most from his dribbling, runs and pace. The good thing about playing him on the right is to open the chance for a shot but he hasn't exploited it much. His crosses have been better. Having him on the left could make crosses and passes more natural and faster. A lot of times he makes his run down the right and toward the center, then has to adjust himself, and play the ball with his left foot.

Two attack lineups I wanna see more of are:

To me, he did those things because he was the only attacking player capable of making a play in a match like last night. Sometimes you have to take risks, it’s a needed evil in a game lost from the start (aggregate wise). His skill and speed on the first goal but still being patient enough to wait for Khedira to overlap. Then a repeat on the second goal with Lichtsteiner basically.

What also has to make us happy is the work rate he showed getting back. This is somerging I didn’t expect to see from Douglas when he arrived but he’s great.

My only issue with him is he fades out of games too much, I didn’t see that as an issue last night as much as I have in other matches. I think he’s well ahead of Cuadrado but there’s no reason they both can’t play. In fact, I would love to see them both on the field together

I don't see it honestly. Cuadrado was in wonderful form until the injury. His dribbling is ridiculous and he helps in the tactical aspect of the game too much. Besides his defense and positoning, Cuadrado draws so many important fouls for us. Both offensively and defensively.

For me Cuadrado's game now always helps. Besides playing the final ball, It always moves the team forward a step at a time. A key dribble, a cross, a 1-2, drawing a foul. Whenever he receives the ball he consistently leaves the team in a better position than before.

With Costa its more inconsistent. The spectacular mixed with the pointless. Like Cuadrado was when he arrived. Still I think Costa has improved a lot on this since he arrived. Specially his commitment to the team and his work rate like you say Luca. So I don't see why he can't get even better.

Its a great problem to have these two.

I just can’t imagine Cuadrado in a match like this, playing with Higuain and Mandzukic having anywhere near the same impact. He’s a bit more one dimensional. It’s not a negative but he has a specific role that is enhanced when he’s playing with someone like Dybala, Douglas or even Bernardeschi who are much more dynamic players than Cuadrado.

Both Cuadrado and Douglas miss terrible chances though. Cuadrado has improved this and he comes up with big goals like against Milan but this is where I would like to see Douglas become more decisive. He has too much skill to just score the odd world class goal against Benevento a season

Luca wrote:I just can’t imagine Cuadrado in a match like this, playing with Higuain and Mandzukic having anywhere near the same impact.

Remember the Bayern game. Higuain and Mandzukic weren't there but we did play with a poverty lineup. Midfield and attack decimated, Hernanes (

), Khedira, Sandro and Morata upfront. Cuadrado benefits much more from Mandzukic than anyone else as he can cross.

Good point brother. I will only counter by saying that Douglas is more dynamic, he can play off the right, the left or in a freer role and does well in each spot. Cuadrado is on the right or the right side of the bench, but again, no reason they cannot co-exist

Luca wrote:Good point brother. I will only counter by saying that Douglas is more dynamic, he can play off the right, the left or in a freer role and does well in each spot. Cuadrado is on the right or the right side of the bench, but again, no reason they cannot co-exist

I agree. That's why I hope Costa will be better and why I want to see him on the left.

We need more of Douglas and Bernardeschi together. Two extremely dynamic players. It would just be fun to watch

Douglas Costa: Moving to Juve best choice of my life

Brazil international Douglas Costa declared moving to Juventus was “the best choice in my life. It’s a dream to be here and give my best every day!”

The winger completed the transfer from Bayern Munich and has quickly become a fan favourite.

“I am proud and honored to be part of Juventus family,” he wrote on Instagram after a heart-breaking Champions League exit to Real Madrid.

“Almost 1 year ago I decide to move to Turin and for sure was the best choice in my life. Thank you to all warriors that fight every game, thanks to all the fans who have supported us so far!

“Unfortunately somethings happens and we don’t understand why...But our fight still continuous now to win Calcio and the Cup! Its a dream to be here and give my best everyday! Thanks your flash #finoallafine ”

Tears in my eyes

Sorry for what i said last summer

rincon wrote:Two attack lineups I wanna see more of are:

This is what i mean

What a performance. Getting better by each game. Early candidate for player of the month.

S wrote:What a performance. Getting better by each game. Early candidate for player of the month.

If we ever sell DC in his prime I will be angry.. what a player! its players like him that make watching football great we are so lucky to have him one of the best wingers in the world right now

I think he's the most effective dribbler in Serie A.
I always had the feeling he is a bit more effective when playing on the left wing.
I am surprised by him tbh. I thought only Berna would fit well to our team but thanks to Allergi's special slow integration they will be both fully ready for the next season.
Would be dope to see Costa and Berna on the wings hopefully with Dybala and ofc an improved midfield.

2nd highest in the assist chart with 12 in  much lesser mins(1704 mins) than Luis Alberto who is lead assist man in the league atm(13 in 2640 mins). Would be great if he could finish the season with most no.of assists in the league which is very plausible.

Page 1 of 2
Permissions in this forum:
You cannot reply to topics in this forum
Latest topics
» The Lionel Messi Appreciation Thread & Fan Club IV