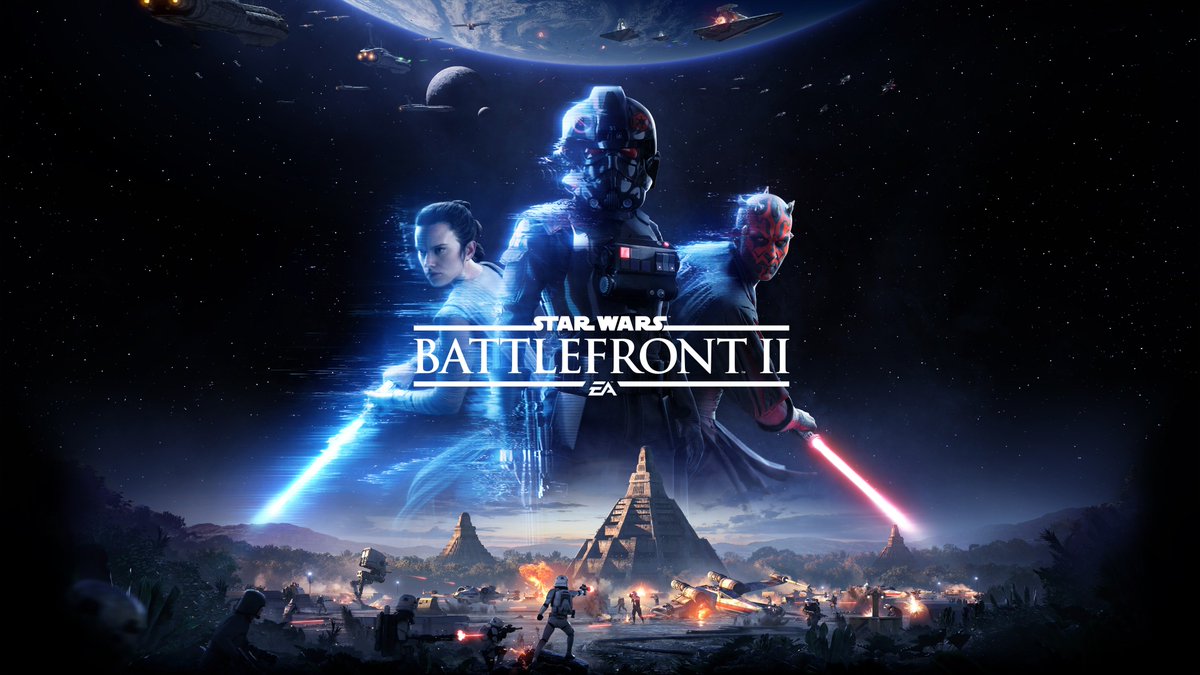 Story is about a commander of an Empire special forces unit, which is different.

Also seems like they have been listening to feedback on the MP side.

Space battles are back, MP is now class based like Battlefield is, all 3 era, heroes and random scrubs have upgradable abilities it just sounds a lot deeper tbh.

Want to see some gameplay but i'm likely getting it tbh.

What else we got around that time? I assume RDR2?

They are saying all the right things, i'll wait for gameplay but i'm likely going to buy it tbh.

What else we got around that time? I assume RDR2?

RDR2 if it doesn't get delayed will probably be earlier than that, September or October.

Dice have confirmed there is going to be no Season Pass.

"We decided on that, and it's one of those difficult decisions because it has so many implications all around," he continued. "When we looked at the way Battlefront had evolved over its lifetime, with the DLC and everything, we decided, 'You know what? For this type of game, season passes are not the best thing. We need to [take it apart] and come up with something better."

It's clear that this decision was rooted in a core idea: "We don't want to segment our community," Diemer said.

"I cannot talk about the specifics of this, but we have something different in mind that will allow you to play longer, be [more] invested in the game without having a fragmented community."

Diemer admitted that it's "dangerous" to the health of a game's community when new maps and new modes are locked behind a paywall. It creates a situation where, as he put it, "the community is falling apart because there are simply not many people playing the different modes."

"So we definitely want to avoid that."

I'm just excited for something other than original trilogy tbh, seeing hoth a million times gets boring eventually.

Looking forward to see what new movies and prequel locations they use.

Showed concept footage of one of them.... 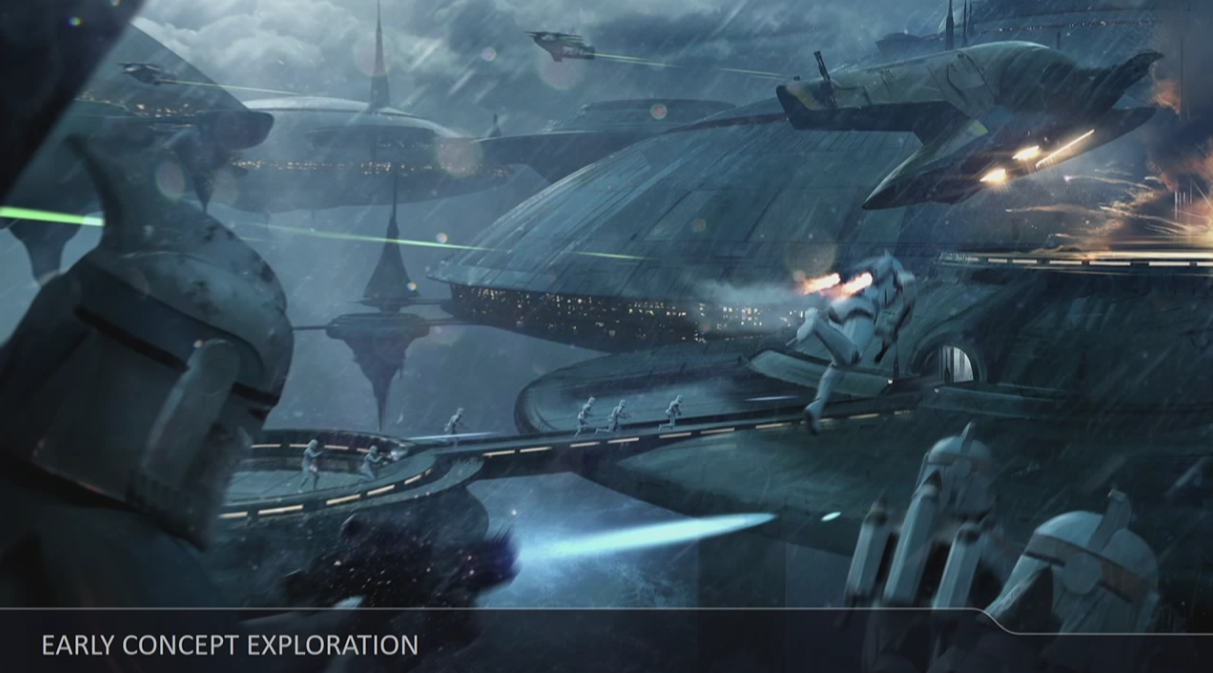 Some stuff from IGN which i personally found interesting.

Battlefront. Firstly, we’re teased with the idea that the new game will offer full classes, rather than the changeable equipment loadouts of the first. Each class will come with a shared progression system, but will change appearance depending on what map and side you’re playing on - for instance, the prequels’ Battle Droids and First Order troopers look very different, but are the same class with your chosen upgrades. That progression system’s seemingly designed to let you feel as though you’re moulding a character as you play, helping you get more attached, as well as fit your play-style.

That’s going to apply to far more than grunts, however. Vehicles, heroes and “something else I shouldn’t mention” (the words of creative director Bernd Diemer, who wouldn’t be drawn on what that is) will all have their own individual progression systems, letting you add abilities to famous figures, or upgrade your favourite ships.

ne of the most dogged criticisms of DICE’s first Battlefront game was that it rarely made you feel like you earned its biggest rewards. Accessing gadgets, vehicles and nigh-unstoppable heroes via floating holographic coins might have made things a little smoother - no more TIE Fighter bunfights as whole teams tried to climb into one cockpit - but it was hardly satisfying. The fact that collecting those power-ups was mostly a matter of good luck at the expense of other players, and that those moments could end pretty suddenly only compounded the issue.

Executive producer Matt Webster summarises that problem well: “it was a brief experience for the lucky few.” It’s clearly a rehearsed line, most likely because a major part of the multiplayer team’s job has been to fix it. While the devs, again, won’t delve deep into exactly how the system will work, we’re told that both heroes and vehicles will now work on what the team calls “a resource-based system”.

Sounds like they are getting rid of the token stuff there to me.

Diemer explains that that the heroes - so far we know of Rey, Kylo Ren, Darth Maul, Yoda, Luke Skywalker and new single player (anti-)hero, Iden - are more physical this time around. It should make close-quarters combat more satisfying (“you cannot do Maul without him being a kick-ass melee fighter, right? That would be sad.”), but also make them feel less like the hovering laser-sponges of the last game

One of the things i wanted the most tbh, the hero vs hero fights were nowhere near as epic as they should have been.

IGN have a single player preview too but i haven't read that one.

Sounds quite interesting tbh. I am glad they realised their mistakes. Can't wait for the beta

Yeah, obviously if the beta sucks i'll change my mind but for now i'm optimistic.

I want to spawn in on Yoda's planet to 'I HATE YOUUUUUUU' and use L3 and R3 to roll around as Anakin bleeds out in the swamp for 3 minutes.

Like I said I'm taking what they are saying at face value tbh, but I hope it all comes to pass.

I'm still apprehensive due to original but will see what the beta brings.

They are saying all the right things, but words won't be enough until I play it for myself.

Been reading up on this some more and it's definitely confirmed hero's won't be a pick up anymore.

Sounds like you accumulate points and you decide how to spend it, i imagine the same will apply for vehicles that do all the damage.

So basically people will have to decide if they want to save up for a Hero or spend it earlier for lesser stuff.

Assuming that ASTs and ATATs are tied to the same system i reckon it would mean it limits the complaints Tom has about just jumping in a walking death machine whenever you like.

Not sure if they are doing away with the pick ups completely or not, but definitely sounds like heroes and vehicles won't be.

Yeah it should be point based

Attempting to appeal to the ultra casual once a month gamers ended up backfiring, because you end up with legit players just abusing the walk in system and you have players in death machines shitting all over casuals on foot

MP games should always reward better players, because in reality nothing's stopping the better players from picking up stuff anyway

That's what it sounds like to me too, also there was an info blowout from Youtubers yesterday.

Elements of choice in the campaign.

Back droid is MC companion, has tricks.

Dogfights and space battles in SP.

Play as Luke and Kylo in campaign, briefly. See Iden from their perspective.

Everything will have progression. Heros, soldiers, ships etc. A lot of unlocks to promote longevity

No more pickups, but more opportunities for more 'skilled' players to become heros. Though everyone would get a chance.

ADS and hip fire will be effected now unlike BF1.

No squad system, but a new system for parties.

A LOT of customisation, both cosmetic and gameplay.

Heros will have a rock, paper, scissor system. Depending on the situation one maybe weaker/stronger.

Not all classes have jump packs. Very specific to certain classes.

The only thing that worries me there is the change in gunplay, i understand it can't be how it was in the first game. But i feel like it's important it's not a Battlefield clone and has it's own identity and retains the ability shoot while on the move.

Too much ADS would slow down the game like every other shooter and i personally want it to retain it's movement and pace even if they make it harder to actually use the guns themselves.

Because at the end of the day it's a star wars game, the battles should be fast paced to me.

The rest sounds great, especially the hero changes. I'm especially interested to see how the Lightsaber based heroes behave as Lightsaber battles in the first game acted like two plastic toys banging against each other until the other one fell down.

EA has confirmed that the gameplay reveal on June 10th is from the prequel era. (Assault on Theed to be exact)

I think we all knew would be but that's confirmation now, also if people don't know what Theed is....

From the film obviously.

"Not all classes has jetpacks"

Lmao jetpack was basically a must pick in BF1 since everything else sucked.

Hope they don't nerf 90% of the game like last time

Lmao jetpack was basically a must pick in BF1 since everything else sucked.

I think that's the point, they don't want everyone flying around the map constantly.

Honestly I think a battlefield like class system is good for the game.

We'll see though, like you though I'm still concerned about the over nerfing lol.