Diane James becomes UKIP leader. One look at her and her speech and it's obvious she is not taking the party anywhere near the heights Farage did. She looks uninspiring and sounds generic.

What do you think of her @DuringTheWar 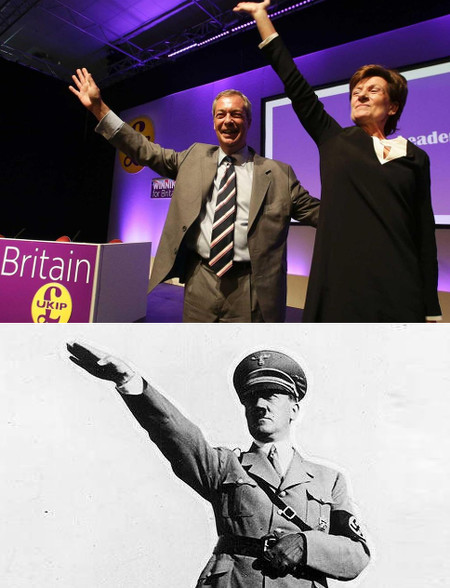 - wants to make GermanyBritain great again
- promises to create more jobs for GermansBrits
- hates Jewsforeigners
- uses referendums to get his ideology into power
...

The rise of populist parties around the world is getting scary.

UKIP aren't really popular. They just have the loudest supporters. And other right wingers vote for them as a protest vote.

Well, how ruinous a protest vote can become will be more and more evident when more of the populist parties everywhere gather momentum.

- wants to make GermanyBritain great again
- promises to create more jobs for GermansBrits
- hates Jewsforeigners
- uses referendums to get his ideology into power
...

Agreed, Farage and Hitler are cut from the same cloth. The amount of Foreigners farage has starved, gassed and killed climbs by the hour.

Tbh i have become distanced with politics lately. Labour are an absolute mess and it pisses me off reading anything about them.

If somehow Corbyn survives backstabs by his own party by the next elections, he gets my vote. If not, then it's another protest vote to green.

All the major parties suck ass, swear the 'leaders' get worse and worse every year. You end up with 400 resignations and the 100th choice for each party.


Not voting, have zero confidence either party will deal with anything.

You know that Hitler started harmlessly, too? If you don't curb dangerous developments in the beginning, you might not be able anymore to stop the avalanche as soon as it rolls.

You only need to look at the developments in Turkey at the moment. It started pretty harmlessly, too - but did you follow how many people already landed in prisons for practically no reason now? And quite some seem to have disappeared altogether.

So better try not to let extremists get anywhere near power when they are still 'harmless'.

House of parliament used to be so entertaining with Cameron and Miliband, now we have to watch two of the most boring people in politics bore us to death.

There is so much drama in the labour party right now, with Corbyn's "hit list" somehow getting leaked causing more disdain in the party. At least the conservative party seem to have their house in order following the referendum with Boris accepting defeat gracefully despite being the most popular member of the party with the voters. Labour is just a mess, the whole party want Corbyn out but he keeps soldiering on with his hands covering his ears. If he doesn't resign Labour will lose even more seats in the next election. I still remember that ad he made in the virgin train. So cringe....

UKIP have nothing to give the voters now that Cameron allowed the referendum vote. They relied on that motto and can't attract any more level headed brits because there is nothing more to scare them with. They will go the way of BNP and we will hear nothing of them

-Optimiistic about future (from most to least):

Free liberals are Patrick Bateman types (Or at least that's the caricature of them, I think, mostly young male professionals living in big cities), Our Britain is RWO's nightmare visions of nazis. Common sense is OurBritain-lite.

I personally welcome our communist future for banters sake.

As long as it leads to House of Parliament banter

Would like him more if he wasn't so soft with being against Nato and trident and he probably still wouldn't agree to military action if it was the only possible solution to a problem.

The rest of the world isn't so peace loving and friendly, being stacked from a military POV is a great deterrent even if it's rarely called upon. He'd have us living with a 10 man strong army and maybe a quad bike for emergencies.

Tomwin Lannister wrote:Would like him more if he wasn't so soft with being against Nato and trident and he probably still wouldn't agree to military action if it was the only possible solution to a problem.

The rest of the world isn't so peace loving and friendly, being stacked from a military POV is a great deterrent even if it's rarely called upon. He'd have us living with a 10 man strong army and maybe a quad bike for emergencies.

Corbyn should adopt a defensive policy of doing away with the whole of the army, spending to zero, and say that if anyone ever invades Britain, all the British people should kill themselves. Which nation would be ready to take such blood on their hands?

Anyway, it's just a weird fantasy I like to play in my head. If a nation had no military at all, but the capability to commit a nation-wide suicide in the case of invasion & occupation, would anyone invade?

I would invade myself, because anybody that believed suicide was a legit option would kill themselves and I'd save countless finite resources via causing the death of millions of idiots. Thus in one masterstroke I'd perform the most economically and eco-friendly move in History.

Obviously my fantasy did not take in consideration that anyone near like you would ever be anywhere near the position of making that decision.

Does my mass suicide fantasy seem so weak any more?

Pls bro, that barely gets you 1/3rd of the Uk population

*launches a campaign to remove Rachel Riley from UK television*

NHS could get 5bn after Brexit happens according to Boris