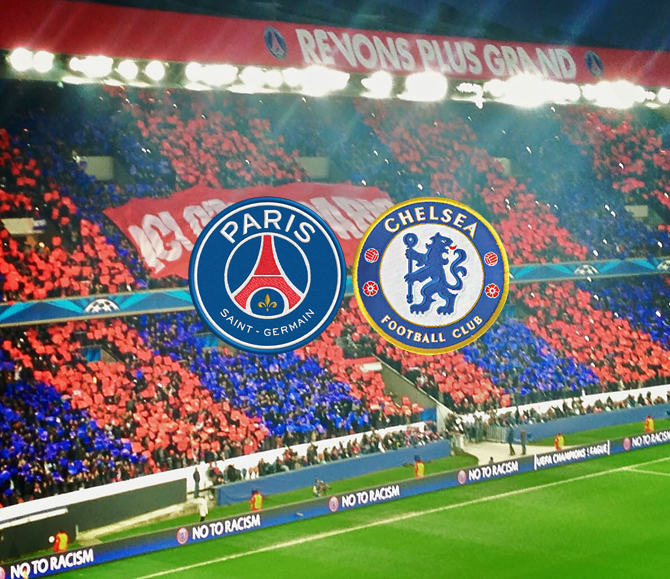 No JT, no Zouma, no Matic but on the plus side, no Aurier, no Verratti.

No real complaints with the line up its what kick posted but swap Oscar for Pedro...

Who ever is #10 really has to do an Okazaki and work hard as *bleep* today, else we get over run in midfield... Have a feeling Cesc will let us down physically lime last year.

Also means we will lose if I don't complain

That absolutely should have been a goal. Diego

Our last 10 minutes have been great after a meh start

I'm pleased overall about this first half, we've been shaky in defence but it was to be expected, but we also look dangerous every time we go forward because our ball retention and play in the final third is good tonight.

I'm confident we can win this

He scores when he wants....

Well it's not a bad result. They were slightly better, especially in the second half but it could have been easily a draw or even a win for us. We can definitely overturn this at home.

It's not a bad result, but 1 all would have been much better.

Let's hope for a clean sheet at home.

Obviously would have been great to hold onto the 1-1, but this result is far from horrible. 2-1 is as good as a win for us. And with the season we've had so far, I don't think you'll find a single Chelsea fan who wouldn't have taken that all day long before kick-off. A clobbering was very much a possibility here, and we more than avoided that. I think the biggest encouragement will be the performance. It's true we were dominated with regard to possession, but away to a side with that quality you'd expect that. On the whole though, I'd actually say we had the more chances and half-chances on the night. A little more composure up front and we could have scored several today.

The pessimist in me still says we're going out in the end, but there's definitely hope yet thanks to tonight.

I think both teams will walk out at SB in a few weeks thinking they can get the win. Should make for an exciting game.

@Shed wrote:It's true we were dominated with regard to possession, but away to a side with that quality you'd expect that.

And what exactly would you attribute that to?
You rightfully pointed out that with the season we had and with the game being away that's what it's normal to assume but it's also true that in last year's clash vs PSG we were dominated and we were at home, and we were 1st in the league and not 12th. FFS we were even 10vs11.
And even in the quarter finals 2 years ago we progressed but actually scored from an Ivanovic throw-in and a Azpi's deflected shot from 25 meters.
And it's not really PSG, I struggle to think of a quality side that we dominated in regards of possession and control of the game in recent years. Maybe just Arsenal.

The coach? Probably not because it was the same for Mou's predecessor. The midfield? The players?