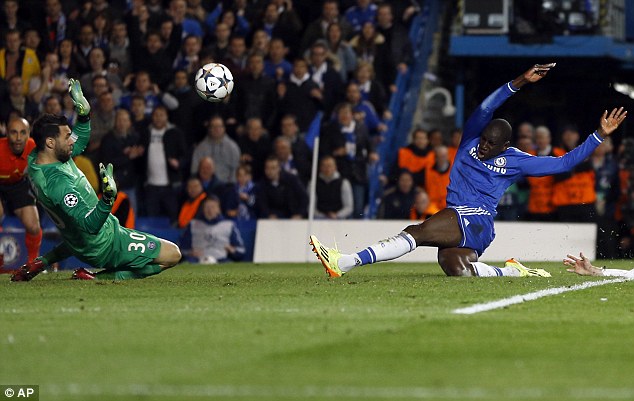 We just have to keep a clean sheet and we're through.

You cant just play to keep a clean sheet.
Keeping a clean sheet is one scenario out of many which could happen. What If they score an injury time goal for ex.? What if the referee makes a stupid mistake which helps them score from a penalty to level up 2-2?

Here you are playing against a team which has become well verse with our continuality recurring tactics (You don't think they know we might use one of our parking the bus scenarios and try and hurt them on the counters?).

But for them I believe, it doesn't matter what you throw in their way. They will come to SB to avenge the previous result and to break Chelsea where few can. They will come for one thing; a win. You've already sensed it too, didn't you, all that charge and vibe through the recent assertions of their players (and coach) in the media, right? (And we did good by not responding or making any inflated claims). They really want to win this because they're fed up with losing and they're hungry for CL glory and they have suffered last year after a great result at Le PDP. They will want to win because pain is the greatest teacher. A 1-1 draw at the PDP, on a surface level, ie to most Chelsea fans and commentators / analysts is advantage Chelsea, but if you go further than the communal and tie things together with the over-all picture and previous encounters and results, you might come to know that it is actually advantage PSG not Chelsea.

If we want us to win, then we should play for a win. Simple. We forget about any positive result or slight advantage and go all out to play for a win.

A manager should not temper when things are working well. His services are only required when things are going badly or when the players want an extra boost of mentality or support.

I'm not saying we should park the bus and hope they don't score, I am just stating what needs to happen.

I don't care if we pass it between a defence for 90 minutes or if we go all out attack from the off. We're through as long as we don't concede.

Since we're at SB, we have the advantage, get an early goal. Then look to score again before half time, if we get two, there is no way we're going out.

Yes, correct. If Chelsea wins, they qualify. Also if they don't concede.

I agree with the lineup kick posted but I think Tibo and Ramires will definitely start over Cech and Oscar.

Ramires on the wing and Willian as a CAM.

Erm, I have it all made ready to go out this morning...

Post it and I'll move it to the OP.

If either of you has several hours to churn out two of these a week, I'd love to see with what seamless punctuality you do it.

@Shed wrote:If either of you has several hours to churn out two of these a week, I'd love to see with what seamless punctuality you do it.

As Shed has now made his thread, we shall use that one.