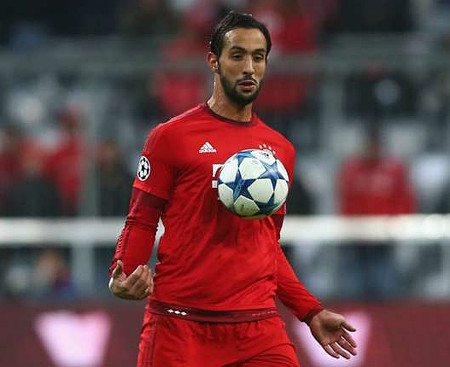 bundesliga.com: Medhi Benatia, what led to you making the decision to join FC Bayern München just under a month ago?

Medhi Benatia: I received lots of offers this summer, but I couldn’t reach an agreement with any club until FC Bayern came along. When I heard that FC Bayern wanted to sign me, it was clear that it was the destination where I’d further my career. AS Roma are a big club in Italy and a club that have the best European prospects, but FC Bayern are currently one of the top three teams in the world. I wanted to move to Munich in order to move into the next stage of my career and win lots of titles.

bundesliga.com: Did you seek out Franck Ribery for advice?

Benatia: Absolutely. I called him specifically because we know each other from the time we spent together with Olympique de Marseille [between 2005-2007]. He immediately told me that it would be difficult to find a better club than FC Bayern anywhere in the world and that everything here is, simply put, just right. Having been here for a month I can confirm that what he said is true. It was impossible to turn down a move to FC Bayern. The fact that people such as [CEO] Karl-Heinz Rummenigge or [head coach] Pep Guardiola got in touch with me personally to express their desire to have me on board showed a lot of class. After that it was clear that I’d be moving to Munich.

bundesliga.com: What’s it like working with Pep Guardiola in training on a daily basis?

Benatia: Pep Guardiola communicates a lot and gesticulates a lot as well, but he’s just passionate, which is a good thing. He tells you exactly what he wants from you in great detail. He knows what he wants and demands a lot of us in a tactical sense. I had to pull out of the Paderborn game during midweek due to a groin issue and he was completely accepting of the situation. He told me not to bother about it and that there were still a lot of games to go in the season. I can only say positive things about him.

bundesliga.com: Do you feel like you’ve already settled into life in Munich?

Benatia: My wife and I are really happy. The city is beautiful, clean and cozy. People do recognise me on the streets, but are happy to leave me in peace. That’s really enjoyable and very different to life in Morocco or Rome, for example, where it was impossible to go out on your own.

bundesliga.com: What have you been most impressed by so far at FC Bayern?

Benatia: The highest level of professionalism at every level. The standards are very high in training. For me it hasn’t always been easy because I haven’t yet been in peak physical condition. Players like [Philipp] Lahm, [Arjen] Robben, [David] Alaba or [Mario] Götze are unbelievably strong. They never make a technical error. It’s no wonder then that so many of these players are already World Champions or UEFA Champions League winners.

bundesliga.com: Which of your new team-mates, if any, have surprised you?

Benatia: I’d prefer not to single out one player in particular, but David Alaba is already unbelievable. He’s still so young, but he’s capable of playing in defence, in midfield and on the wing. He can do it all. He’s a superb player. Philipp Lahm reminds me of Francesco Totti at AS Roma. He’s always stayed true to one club, is the club captain and always produces a top performance, all whilst demonstrating great modesty. These players are true champions.

Linked this in the Players Thread.

Is Benatia living up to last year's hype ?

for those who follow bayern regularly  , is he playing well for them ?

he had a lot more responsibility In Roma than he has in bayern,IE having dodo( wingerback) who lacks defencive solidity of a leftback .gave him more problems to deal with and he did his job relatively well now he is in the team with a better depth so he just do his role and nothing that significant. I don't follow  Bayern but 52 people viewed this and 0 answer so i answered.

He's come into a world class team and performed to their standards. You can't ask much more than that.

), there's no other conclusion.

I thought he was poor against CSKA Moscow and Borussia Dortmund. He doesn't seem that quick, one of the black forwards from CSKA took him for a ride many times during that game.

I barely saw him play in Italy so I'm not exactly sure what to expect from him. Don't think it would be a good idea to make a judgement on him now.

Marquinhos was hyped so much when he joined PSG and his first season was filled with mistakes, I bet the same will happen with Benatia.

Okay. Musa at CSKA is ridiculously quick so I was not surprised when he out-paced a CB.

Other than that he was brilliant against Dortmund in that game bar 1 blunder where he was caught napping and Reus headed in for a goal. That was poor especially when Benatia is known as a good CB with good aerial ability. Really poor. But he had a great game, made good interceptions and tackles and was brilliant with the ball especially 1 great run and cross down the right wing.

Thing is Pep is experimenting like mad, he is often playing Benatia as RCB in a 3 man back-line without a RM with Robben RW. So essentially Benatia also has to be a RB when he is up against Reus.

Other that the game is played at a snail's pace in Seria A. He obviously has to adjust to a much more fast paced BL. Evident when he was caught napping by Musa(CHL) and Reus.

Other than that he looks like a slight better version of early Boateng. he looks unrefined as in extra physicality and throwing arms. So he has to discipline himself into Pep's version of a CB.

Overall I think he has done well. Adjusting to a new league, new opposition, new team-mates takes time. I did not expect him to be brilliant till the 2nd half of this season or start of next. Every transfer at Bayern has been this way from Boateng to Goetze to Martinez. Expect Alonso who hit it off well.

On the whole he has pace. He is good aerially, he won multiple headers in our corners against BVB but could not head it goal-wards. He is good with the ball in his feet and is a good tackler and tactically.

I think next season and end of this season he will develop and form a great combo with Boateng.

You have to give him time and be objective about his performance. I am more than happy.

He's been rather good from what I've seen. Has already begun the process of benching Dante so that does mean he's adapted and will continue to improve.

Has had some difficulties here and there, but the jury's still out as to whether he's proved his worth just yet. Need to ask this question at the end of the season when he's had all 3 campaigns under his belt.

Only thing I'm a bit worried about is he seems prone to fouling a bit too much, it hasn't cost us so far but it might at some point; maybe that has to do with a change of pace as well.

benatia having trouble with pace is nothing new tbh .

i remember an AFCON game against tunisie in 2012 where Msakni tore him a new one .

Lord Gervinho was also owning him badly last time he played in the CL for Udinese AFAIK:

Glad Barca got Vermaelen instead tbh, dodged a bullet there.

Fußball wrote:Lord Gervinho was also owning him badly last time he played in the CL for Udinese AFAIK:

Yes but tbf that was 3 years ago, and Benatia MUST have made a huge development to the better.
After all, only 5 years ago he wasn't deemed good enough for frshly promoted Freiburg by Robin Dutt

Well, today he can't do much anymore as he just got sent off

lmao as if farfan knew this would happen

The power of the jinx

Not sure if Benatia or Koscielny

^but you listed him as world class

What a time to make this thread

Hapless_Hans wrote:Only thing I'm a bit worried about is he seems prone to fouling a bit too much, it hasn't cost us so far but it might at some point; maybe that has to do with a change of pace as well.

Don't get the big deal. Boateng also made a blunder and was also positionally suspect. If Benatia would have got the tackle he would have been hailed. Anyways that was not a red as Aguero was nowhere clean on goal IMO. It was a red.

But none the less a lack of experience and an immature tackle. He obviously has no CHL Experience and it shows and Seria A is also a very slow paced league so he has to adjust.

Don't see the big deal. We have to give him a stretch of time and only judge him earliest by the end of this season

Well, the problem is more that he had rather reckless tackles before and he was lucky then. Yesterday it was particularly problematic as he got sent off after 20 minutes already, leaving Bayern short of one player for 70 minutes.