It's pretty stupid if you ask me. I am sick of it honestly.

Isn't that something to do with human nature that one would put down others in order to make oneself look presentable. I believe it would apply to other aspects of life.

player x was always overrated though

Sometimes people are just sick of overrating, so they underrate to balance things out.

Sometimes it is club based, such as the CR Messi threads. Biased fans will bash the other player to make their player (hence club) look better.

Sometimes people just like their player so much they feel the need to share the joy, they do it wrong by spilling bull over other players instead of validly explaining why their idol is awesome.

Sometimes people just hate the above people and feel the need to spread misery over them, just like the case against CR, who has a huge band-wagoner fan base.

Sometimes people feel the need to analyze (me) but do it by bashing 9not me) instead of constructive analysis.


Meh, it will still be, but in a smart way now

Because they are stupid and probably not older than 12.

That's the problem with this board in a nutshell. 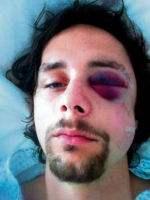 cause there is no genius among human nowadays

Yesterday at 1:07 pm by Warrior