His defensive work is outstanding. He is everywhere indeed. His playmaking isn't as outstanding as I had hoped though. At the moment he's taking the safe sidepass to Alves on the right a tad too often. 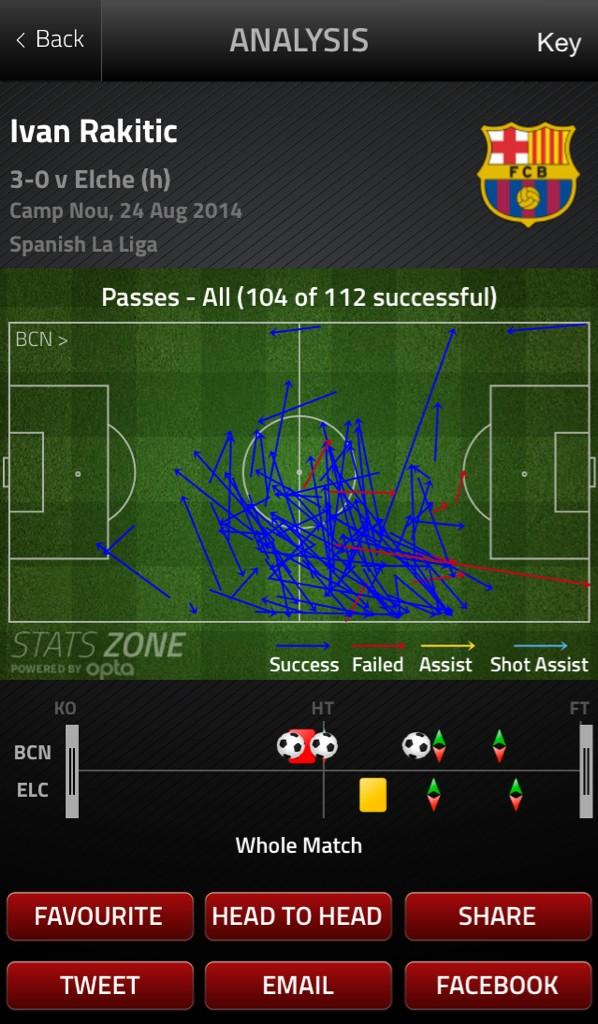 Maybe he'll get more comfortable with time. I have no big problem if it stays like this either as long as he contributes so much defensively. Iniesta, Messi, Nerman and Suarez should provide enough creativity.

For me he is a bit Vidal-like but just not as good. Perhaps Vidal is more like a Rakitić 2.0. Going forward they are quite the same but defensively Vidal is an absolute animal.

I regard him as a box-to-box midfielder as well.

Yeah, I'd probably agree with that. Vidal is more dynamic generally speaking, in everything he does. Can dribble in the 1 v 1 too, something Rakitic doesnt seem as adept in.

I would say Rakitic is a better passer of the ball though, think he has a bit better eye for a pass.

@ futbol I don't agree that he is a box to box. He may be able to play that role because of his range of passing and work rate but he is not a natural to me. Just like Franchise mentioned he lacks the agility to dribble and get out of tight spaces or the composure to hold on to the ball under pressure. For me Modrić is box to box not Rakitić and that is indeed how they play in Croatia national team.

Croatia utilize that pairing wrongly though. They play Modric further forward although Rakitic is the better creator and Rakitic as a holding midfielder although Modric is more of a build-up player who should play deeper.

For all the shit I've given him I will also give him some credit for doing things well.

From 4:45 onwards. Involved in the move for the 3th goal with a quick long diagonal ball then arrives in the box to play the one-two with Messi. Also involved in the first goal. Obviously also defended very well, 1 tackle in particular standing out (forgot against whom, Gimenez I think). So well done. Still think his technique isn't that great but if we're going to play like this, midfielders sitting deeper and releasing earlier balls for the front 3 to chase, he might fit after all.

I do remember that tackle you're talking about, was one of the best I've seen in a while. Fantastic tackle.

he's not being used to his best potential, but overall he's doing well in the role given.

These kinds of physical games he's in home. I don't think we would have been so dominant with Xavi tbh.

you gotta give it to the guy, the past couple games he's been marvelous

replacing Xavi is not an easy task and he is transitioning very well.
i mean just last season we had cesc lol.. what a difference in terms of quality.

considering we spent under 20m for him, he has been above standards and proven to be a great buy.

Fits in like a glove and is willing cover up Alves' ass when he runs forward up the park. Excellent signing.

he did a nearly Xavi-like turn in first few min of the game. can someone post that gif?

so happy we got him.
seems like to have all we were missing in the previous seasons

as the weeks go by and we keep winning everything my mind wonders to the memories of cesc and how much of an upgrade we got.

With how successful he and most of other buys turned out to be, I cant help it but feel a bit bad about all the crap I said about Zubi.

it's fine just think about douglas / verm / song and that feeling will go away.

His pass to Pique was Laudrup reborn. Top player.

I really doubt he could do that pass before he came. He has improved technically alot I feel.

The Franchise wrote:I really doubt he could do that pass before he came. He has improved technically alot I feel.

That was very nice, but easier in my opinion.

Buff, they are both genous first touches. Actually, rakitic first touch pass is just out of this world. He has been doing some incredible long range, short range and weak foot tremendous first passes all season long.

I agree, his first touch passes have been excellent.

Rakitic says the team are happy to work to serve the attackers, but admits it's hard work covering them defensively.

"Many people say that it is very easy to play with them," he told Marca. "I don't agree.

"They are players of a different level and if we play for them is because they have earned it, but that does not mean it's easy.

"All teams would like to have Leo, but fortunately we have him with us and we will take care of him as best we can.

"He does things that no one else can do. Life is easiest with him and if we can make it even better, perfect."

Rakitic also revealed he is keen to add three more trophies to his collection between now and the end of the year.

He added: "In a short time, we are going to play for two more titles: the Uefa Supercup and Spanish Supercup and at the end of the year, the Club World Cup.

"It's so beautiful, we fight for trophies and we make a sacrifice in being away from our families.

"Sevilla have been reinforced very well, it will be very difficult against them. We know each other very well.

"I know Unai Emery will prepare the game very well. We will be prepared, and see if we can win the first title of the season."

What a legend. Glad we took him ahead of Kroos.

Similar topics
» Ivan Rakitić Appreciation Thread
» Ivan Rakitic 2013/14 all goals and assists
» Now that Rakitic has firmly established himself as the best Croatian midfielder in the world what's next for this long-haired beaut?
» Official: Rakitic to Barcelona
» Lovro Zvonarek - Croatian Kaka